Check it out... if 18 minutes of brilliant music towards the end of the album sounds like a good deal to you; though that's only 18 brilliant minutes in an hour and 16 minute long album

Skip it... if you expect Ottman to maintain his usually flawless style; flourishing themes, exciting and thrilling orchestral music, and action cues that have your heart pumping; because he trades all those trademarks in for ostinatos and unnecessary sound effects, with only a single remarkable theme left to him. 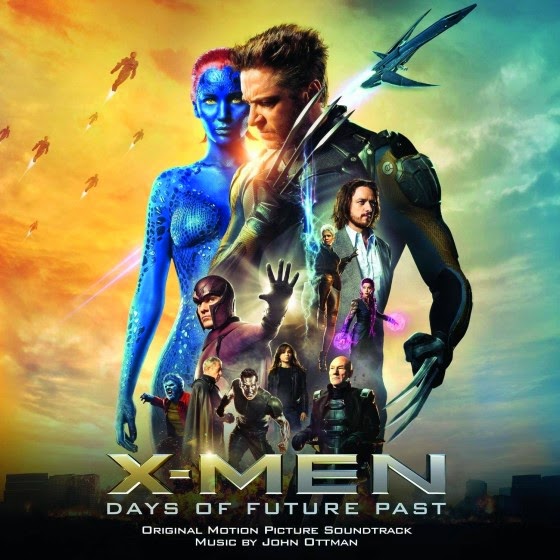 "Ottman has given us a somewhat enjoyable album, but technical brilliance, paired with his usually outstanding thematic understanding has been sacrificed in the process."

I think it's safe to assume that John Ottman is one of the most respected composers in Hollywood currently, producing some of the most intriguing, brilliant and dazzling scores of the past few years, most notably Superman Returns, an utter masterpiece, and last year's Jack the Giant Slayer, a grand adventure that had us all embracing orchestral music once again. The man knows how to bring grandiose orchestral music together with modern utilities and techniques, to create fascinating and impressive scores. And so when it was announced Ottman was returning to the X-Men franchise for the latest installment, X-Men: Days of Future Past, people began to rejoice! His prior addition to the franchise, X2, was indeed quite underwhelming for most, (though that wasn't the case for myself) though that doesn't necessarily mean his next attempt at creating a great X-Men score should fall short, seeing that between these two scoring efforts he's had a lot of time to advance his skills, with those scores of which I mentioned before, and others like Astro Boy and Fantastic Four: Rise of the Silver Surfer, all of which I enjoyed for one reason or another. Everything leading up to this score release screamed epic, and I was truly excited for what I was to receive. But wait! Once released, the reviews started to pile in, and we found ourselves with a mixed bag; James Southall of Movie Wave gives this release only 2 stars, but Jørn Tillnes gifts a 93, equivalent to 5 stars, and recommends the purchase of the album. It all seems to be on the fence here, so I shall attempt to set the score straight. So, does the score fly away and above the supposed lackluster X2, or does Ottman fall down once again with this franchise, gifting us something that is less impressive then was to be expected? Let us explore.

If you come into this album hoping for the kind of orchestral grandeur and lavish instrumentation you received from Jack the Giant Slayer, I fear you will be disappointed. Days of Future Past is for the most part an ostinato affair, with progressions taking up the bulk of the album. It is often repetitive, slow, unmemorable, and unoriginal. The score sounds distinctively Zimmer-esque at points, and it seems as if Ottman is just picking and taking from various superhero scores of the past decade or so, taking from The Dark Knight trilogy, Man of Steel, The Amazing Spider-Man 2 and it's predecessor, James Horner's The Amazing Spider-Man, and so on. For crying out loud, the third cue on the album, Hope (subtitled Xavier's Theme) seems to be a complete re-recording of Hans Zimmer's Time, from Inception. Though, not to downgrade Time, for it's much better executed than Ottman's rather dull effort. And Hope happens to be one of the stand-outs on the card! There are brief glimmers of inspiration and originality, though these are overshadowed by less than impressive attempts at synthesized action, or some of the shameless utilisations of strange sound effects. The cue which boasts both these qualities happens to be the longest cue on the album as well; Paris Pandemonium is one of the most presumptuous pieces I've heard in a long time, which runs for far too long for it's own sake, and lacks a specific direction. Whilst yes, the cues which incorporate ostinatos are repetitive and unimaginative, they do allow us a solid idea of where the piece is heading. Paris Pandemonium simply flies all over the place, giving us glimmers of perfection, before trailing off into a seemingly unrelated phrase that doesn't make sense in the context of what we were just listening to. In short, it's 7 minutes and 45 seconds of utterly torturous listening; it's filled with so many impressive moments that are constantly upstaged by lesser so phrases and riffs, to make for a confusing, and constantly infuriating listening experience.

Fortunately, Paris Pandemonium is the worst section of the score, and for the most part, the going gets better from there. But that's the problem; I'm sure most listeners aren't going to be able to make it past that atrocity of a cue. Most will undoubtedly back out, and that's somewhat disappointing, but understandable. The latter half of the score serves as a better display of Ottman's skills, with better composition, stronger instrumentation, and a better use of the electronic elements of the score. The action cues are much more interesting and deserving of acclaim, as well. Time's Up (Film Version) is a much better display of Ottman's skills when he's on his game, and The Attack Begins serves as a strong action cue, combining intense, fast paced music, with furious synthesizer use that actually does come out as interesting and fun. Why couldn't Ottman have maintained this standard over the entire duration of the album? When Ottman is good here, he's the best he can be, delivering inventive material which feels original and adventurous. Whilst I miss the organic flair that usually accompanies his music, I appreciate the steps he takes within the latter half of the score to employ the synthetic music to best effect. Ottman does occasionally take time to give us some more emotionally satisfying music, and when he gifts us something good to this description, it makes for quite a show. Do What You Were Made For and Welcome Back - End Titles both make for some slow but beautiful pieces which allow the lighter side of the score to shine through, though the latter does erupt later on in it's running time. Days of Future Past commonly aims for a dark and mournful tone throughout, and whilst it seemed to work for The Dark Knight trilogy and Man of Steel, it just irritates me here. I would've appreciated the kind of tone that Brian Tyler allowed us with both Iron Man 3 and Thor: The Dark World, a bright and heroic atmosphere, which we do receive, again, towards the closing of the score. If a greater majority of the score could've encompassed this tone, I believe I would've enjoyed this more as a whole; Ottman's constantly dark and modern mood reminded me of Captain America: The Winter Soldier far too much, with it's thumping bass and lack of organic material. That is not a comparison you want drawn to your score.

The ending of the score is what seems to redeem itself from a fairly average rating, to an above average rating. Welcome Back - End Titles takes from the X2 theme, and is just what I was asking for; emphasis on vibrant thematic material, and gorgeous orchestral instrumentation, which is something the score had been lacking throughout. The strings, the percussion, the soaring woodwind all come together to create a heroic theme that rivals the Thor: The Dark World theme, and the Electro theme from The Amazing Spider-Man 2. Where in 7 hells was this throughout the rest of the score?! The soaring height, the eclectic ideas; it's everything I expected and wanted from this score! How come Hans Zimmer, a composer often ridiculed for his disappointing themes, manages to create a soaring Spider-Man theme, and then utilities it better than John Ottman, the man behind Superman Returns, possibly the best superhero score of the past decade? In sum, Ottman's score is disappointing to say the least. It doesn't feel ambitious, inspired, or at all original, and it serves as a stain on Ottman's fairly impressive resume. It has it's great action moments, and fairly impressive slow instances, but all in all, this is an album which could really use some more organic instrumentation. Ottman's opting for a more modern score than necessary really takes the joy out of what could have been an impressive album, based on the final cue. Is Days of Future Past better than X2? No, unfortunately, though I quite enjoy that prior score, so it's not too much of a surprise. Days of Future Past transcends nothing more than above average, though that seems like a bit of stretch of the imagination; nonetheless, it does earn a positive rating of decent proportions. If you want some outstanding superhero music from John Ottman, either look towards the final half of this album, or just revert back to the outstanding Superman Returns for the time being; it'll do you better. You can purchase X-Men: Days of Future Past on Amazon here.