Analysis of a Cue - James Horner's "The Mask of Zorro" 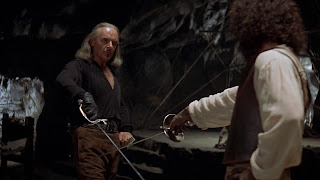 I’d like to begin a new occasional feature: Analysis of a Cue. In essence, I take a scene from a film and break down in great detail how and why the music elevates the scene. This time, we’ll take a look at a couple of scenes from 1998’s The Mask of Zorro, directed by Martin Campbell, starring Antonio Banderas, Anthony Hopkins, and Catherine Zeta-Jones, with music by James Horner.

Clip 1 Context: Don Diego (Hopkins), who was once the folk hero vigilante Zorro, has escaped from prison after many years and seeks revenge against those who put him there. He sees Alejandro (Banderas), eager for his own vengeance, as a promising ally to aid him in his quest, and thus agrees to train him to take up the mantle of Zorro.

This training montage, while by default exciting, carries a uniquely comedic tone. Horner maintains a relatively sparse musical palette, allowing the sound effects to take center stage when necessary. A shakuhachi blast at 1:09 sets up Alejandro in dramatic fashion, whose every wave of his sword whooshes through the air, the sounds setting up the comedic payoff at 1:24, Diego’s casual whack echoing through the cave.

They begin the lesson with a fresh start, and a plucked bass establishes a 3/4 meter, soon accompanied by clapping, foot stomping, and castanets. Between the flamenco tones and the triple meter (perfectly synchronized with the strikes of the swords), Horner reinforces the artistry and dance-like qualities of sword fighting. The music picks up pace to match the increasing speed of the swordplay, and the swashbuckling main theme slowly forms on trumpet as Alejandro learns more and develops his skills at Zorro-ing.

The guitar enters with vigor alongside a sharp cut to Alejandro’s push-ups. Repeatedly, the music builds before cutting off suddenly to enhance the comedy. The first cutoff comes when Diego whips him, leading to the next sequence. The tempo increases as Diego drills and whips Alejandro. Furious, Alejandro charges his mentor and the music charges along, ready for a rumble—until Diego puts a knife to his throat, silencing Alejandro and Horner, and tells him Lesson Number 1.

A soft wind solo accompanies Alejandro’s second lesson, before a restrained but confident trumpet underscores his mastery of swordplay, building to a statement of Zorro’s theme to transition to the next scene.

However, on album, Horner excises this gentler portion, opting instead to cut immediately to the music for Aleajandro’s duel with Elena. Horner once again drives the scene with the 3/4 meter and castanets, playing up the dancing parallels and accentuating the sensual undercurrent of the repartee. Melodic phrases are reserved for the frequent pauses in the fight, leaving just the percussive elements to accompany the clanging of swords. When Zorro is disarmed, a key shift in his theme occurs as he improvises his way to stealing Elena’s sword and claiming victory.

As the two foes share a romantic moment, a lovely wind solo and strings build into Zorro’s theme, though as Elena pulls in for a second kiss, our hero dashes off with a flourish of his swashbuckling mariachi fanfare, doubling back for his hat as the castanets and violins play him out.

Random observation I couldn’t figure out where to put so I’m sticking it at the end so I don’t have to write a conclusion either: at 0:16 of Clip 1, Alejandro says “Pointy end goes into other man.” This movie came out in 1998, nearly 2 years after the publishing of George R. R. Martin’s A Game of Thrones. Does anyone else think Jon Snow’s first sword lesson to Arya (“Stick them with the pointy end.”) inspired this line? Leave a comment if you think so. Also leave a comment if you have any feedback on this type of article.
Posted by TheHof125 at 05:05