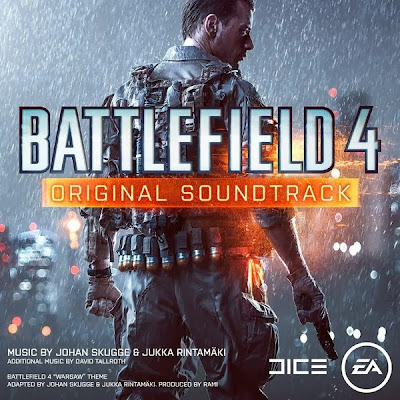 Here we go again! Hello, I'm back with another review! This time for something not so pleasing as Man of Steel. Something that I've personally been dreading for the past few weeks. Going on holidays allowed me time to put it off, but inevitably, I'm here, giving you a review to the sequel of one of the worst scores I've ever heard. Battlefield 4 is composed by Johan Skugge and Jukka Rintamaki, both composers really only big because of the franchise they have been introduced to. I've been hoping for a change in pace, style, anything really from both these men. Anything to separate this from it's predecessor. We shouldn't delay this any longer, let's dive in!

So, what do we start with? Exactly what I expected! Whilst not as ear shattering as any of Battlefield 3's synth, it's still pretty basic. I will admit, it is a step forward. It is irritating, the piece in general, but the percussion does make up for it in the slightest. Warsaw Theme starts off with the same heavy synth beat as our last piece, which does get on my nerves. 2 composers at the helm, and you can't develop another beat for your second piece? It certainly sounds like an action piece, thankfully. One of the major gripes I had with their previous Battlefield scoring attempt, was it's lack of action. 1:25 in. That's where I'm actually completely stunned! They've done something almost jazzy, powerful, a little touching, and pretty bloody awesome! And that's when I look at the composer for this specific piece! It's Rami, not our 2 wonderful composers! Now that is probably one of the most disappointing things I've had happen to me all week!

The Majestic Valkyrie is certain proof that these men have learnt from their mistakes and want to create something a little more in depth, interesting, possibly fun? They're exposing me to 48 minutes of their work this time, so there was an expectation that some improvement was to be made. Whilst not pacey, interesting, complex, The Majestic Valkyrie has a cool funky rhythm behind it which I love! Jin Jie's Revolution is so much more softer, less irritating than anything I've heard from either of this men. Again, like The Majestic Valkyrie, it's fairly simple. Repeat the same beat and rhythm for 3:16 minutes, up the tempo slightly when you can, add some more layers to the music every so often. You have a piece! It's not great, but it's not horrible. Oppression is back to what I've grown to hate! There's some heavy synth lying within, and it's offending my ear drums. The poor guys had enough trouble with Battlefield 3, don't repeat it! It's a long 3:53 minutes, I can assure you that! A Theme For Kjell is a complete contrast from Oppression. It's touching, funky, and hits a lot of chords. The synth is still prominent, but it takes a step back. I almost hear, dare I say it, piano! Something easily distinguishable over synth is good, very good!

And guess what everyone?! We're back to the synth for our next two pieces. Both extremely uneventful, uninteresting, dull pieces of work! Silk Vista has a little more going for it, so the score is quite a bit higher, but that doesn't change the fact that it did next to nothing for me. Alone And Abandoned does a little more than any of the previous pieces. It has a fast, smart rhythm, which for the most part I enjoyed. Fishing In Baku may have been repetitive to an enraging point, but what it lacks in variety, it makes up for with a damn catchy beat! The percussion here is really engrossing and a bunch of fun!

If Wishes Were Horses almost puts me to sleep. It's slow, fairly uneventful and dull for a good majority of it's running time. Pretty much a standard Johan Skugge and Jukka Rintamaki piece! High Tide is one of the more diverse pieces. The percussion is easily distinguishable from the heavy synth here, and takes a center stage. It's quite unpredictable, which is a change from the repetitiveness which we've been subjected to for a good majority of this score. Being Irish sticks with the percussion, but holds back a little more. The synth is more involved this time, to my utter despair! The Beta Theme is just atrocious. It sounds hollow, dull and above all else, irritating beyond belief. 1:23 minutes of pure crap! When The Dam Breaks feels more thought out, and has more depth to it all. There's enough variety and originality here to be able to rate it in a positive form. It's still unmistakably predictable, unfortunately.

Dunn's Down, the longest piece on the track list is up next. It happens to clock in at 4:53, and for once, it feels as if there is a little meaning to this piece. There is a bit of jeopardy here, which raises your interest levels. It's certainly not anything remarkable, though, and it's fairly long running time, or long in the context of this score, really drags it on. Cyclone 2 is our ending piece and it's fairly awesome! It's got some pace, and it feels like a great action piece. Not with the grand scale, but with the funky and powerful beats which make for some nice foot tapping.


Conclusion:
Johan Skugge and Jukka Rintamaki have certainly improved over their first attempt at a Battlefield score. It's filled with more variety than it's predecessor, it's more centered around action, and it drops the ear shattering synth. Unfortunately, despite their best efforts, the score still does succumb to boring, repetitive beats and rhythms, and consistently thumps you over the head with pieces which aren't remotely interesting. So whilst I see an improvement, I don't see me coming back to revisit this score again.

Thanks for reading! Check out some of these links to social networks/music streaming sites/movie related sites/etc...