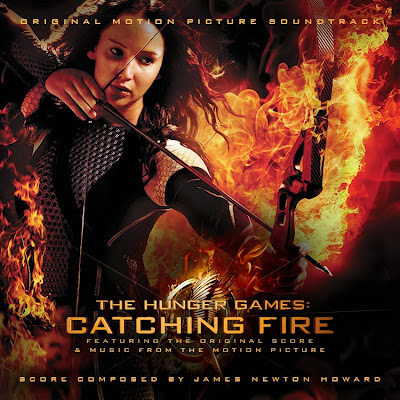 Hello! It's been a while since I've posted, since I had to go on holidays with my family. The horror! But I'm back, and I present you one of the more anticipated films and scores of the year, in my eyes, The Hunger Games: Catching Fire! I'm a huge fan of the books, so I was concerned about the film not reaching my expectations, like the first film. The first installment into the franchise, in my honest opinion, was pretty mediocre. So coming into the film, I had pretty much 0 expectations. The film, though, rocked my socks off! It was an incredible improvement from the first film, and I absolutely loved it!  Now that I've finished applauding the film, I can get to the score. James Newton Howard is not one of my favorite composers, far from it. Nonetheless, he's still still wonderful at what he does. Take a look at his Harvey Dent themes from The Dark Knight, and you'll see the extent of his skills. His score for The Hunger Games, unfortunately, wasn't a great display of skill. It was quite lackluster, in my opinion. Redemption can be earned though, my friends, so lets see how Howard does the second time around!

The score starts off with a good theme for Katniss. Whilst a little repetitive, it's certainly affecting. Something I really appreciate from the guy is his ability to balance contemporary with synth. Howard gets the mix just right. Our first couple of pieces are slow, sad and touching, yet still contain some darker tones within. It threatens to turn cliched at various points, but Howard keeps the score calm and calculated for a good while. His use of effortless vocals brings a certain haunting feel towards the first parts of this score which make for a great mood setter. All this combined with the sharp violins and synth make for a great welcome and introduction. Mockingjay Graffiti is when the score allows for percussion to make it's way through, and that's when the score loses it's calm yet dangerous feel. It smooths out, and allows for some stronger and deep riffs. The Tour showcases some incredibly beautiful sets, some of which are clean and touching, others which maintain the interesting and plotting feel the more recent pieces have contained. It's certainly paving a strong path for the rest of the score, one which I really like.

Daffodil Waltz is the departure from what we've been exposed to as of this far, and sets the way for the grander, more polished Capital themes. The brass is much more evident at this stage of the score, much more prominent. I was a little confused by the decision to include the Panem Anthem into the score. It was a little out of place in the way of tone, and I felt it should have been left off the track list. Peacekeepers restores our common tone, and is filled with mysterious and brooding sets, which all sound wonderful. Whilst a little uneventful towards the ending, I did enjoy it. This is about the stage in which we go back to our sad and deep music, starting with Prim, a piece I didn't feel for as much as I expected to. A Quarter Quell on the other hand is a much more powerful piece, and has some truly awe inspiring moments.

Once again, the vocals play a huge part in creating a dark, emotional mood. Katniss Is Chosen is a perfect representation of this. The vocals add to the piece by ten fold. When the volume raises, the piece sky rockets. It's fairly amazing, to be honest! We have a bit of a down period afterwards, which lasts for a short while, before we return to something original and interesting in Bow And Arrow. It's short, straight to the point and very effective in preparing us for some more fast paced cues that are sure to hit soon. Let's Start looks at leaving the Capital behind and embarking on something fresh and a little more exciting. That's something that I have felt missing for a good while, something fast and exciting. That's the problem a lot of reviewers, and myself, had with the first film's score. It's lack of speed or powerful action cues. The Games Begin show us that Howard has certainly learnt from his mistakes and is putting some effort into creating some awesome action!

Heavy brass is something that I crave. When you can perfect it, it's wonderful! Howard is one of the best in the business when it comes to creating intelligent, fast and powerful brass sets. This score has some awesome brass, as well as percussion, lying hidden in those action cues towards the end. Take The Fog for example. There are some brilliantly intense and exciting sets lying within that showcase Howard's skill with brass perfectly! It's a chaotic and fun piece, with some slow and methodical sets done towards the end. The same kind of thing can be said for Monkey Mutts, one of the more wild pieces here, to my utter delight! Again, it does slow down around half way through, to allow for some cool and calm moments. It's a really touching piece of music, something that the beginning certainly doesn't hint towards.

I Need You is where the music really settles down. Where we get some pure emotion, in musical form. It's bliss, in my eyes! The music, for the next few pieces, rotates between dark and fast and smooth and emotional. Arena Crumbles is one of the emotional gems towards the end of the score, and it's beautiful! It's really moving stuff. Our final piece isn't great though, so I'm left wanting a little more! Nonetheless, great score!

Conclusion:
James Newton Howard has improved vastly with this score, over the first. The action cues are wonderful, the emotional pieces hit chords and when he intends to create a mysterious atmosphere, he does so. This score does have it's down moments, I will admit, but these surely do not outweigh the goods this score has to offer. Get around to listening to this soon!

Highlights:
Katniss
I Had To Do That*
Just Friends
The Tour
A Quarter Quell*
Katniss Is Chosen*
The Fog
Monkey Mutts*
I Need You*
Arena Crumbles*