Check it out... if you're ok with the previous score's consistently blatant thematic material, as well as the often artificial soundscape that Jablonsky incorporates into near every score he composes, for Age of Extinction is exactly the same as those prior efforts.

Skip it... if the electronic thumping that Jablonsky has taken to form for his most recent endeavors has not had you at all entertained. 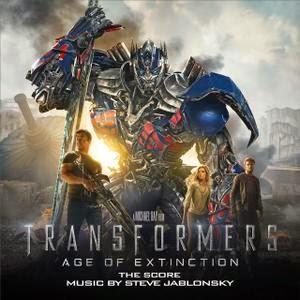 "Age of Extinction is a stupid, fun score; though, isn't that exactly what we expect?"

Director Michael Bay's attempt to rejuvenate, in the critical sense, the Transformers saga, was met with (ironically) a great deal of critical disgust, after his latest film in the franchise, Transformers: Age of Extinction, was released. With a whole new cast from the previous films, it seemed as if Bay was moving in a much more positive direction in regards to this series of films. Unfortunately, that was not the case. As I made quite clear throughout my review that I posted last week, Transformers: Age of Extinction is a rather idiotic, overlong, flashy Michael Bay wet dream, that for anyone who rather likes the idea of coherency and logic, will prove to be a poor movie experience. Not even the usual Transformers defense could work for this film, as the explosions and action, which most would acclaim as being the only redeemable aspect of what you're exposing yourself to, wasn't particularly impressive or entertaining; and a Transformers film that lacks entertaining action may as well not be a Transformers film. Yet despite all the critical panning, as has been the case with the previous 3 installments into the franchise, the film has managed to gross an incredulous amount at the box office; nearly $600 million at the time I'm writing this, though this might be mildly inflated, as reports from those in and around Paramount, the production studio who produced Age of Extinction and the other films in the series, have hinted at. With that kind of money pouring in, it was never anyone's doubt that a 5th film in the series would already be planned for a 2017 release, another date to dread. So, as with every release in this retched franchise, we shall have to watch as the worldwide audience, and suckers for Michael Bay's over-indulgent, boring style, soak up another seemingly deliberate attempt to undermine everything good in the world of action and sci-fi in film, come 2017. I'm elated at the prospect, as you can thoroughly tell.

With every release into this collation of films comes Steve Jablonsky's efforts to produce something reasonably effective for the scoring side of things. As has been the case with all of the other scores in the series, Age of Extinction is another attempt at creating bland, electronic "music," in which he seems all too happy to copy styles and ideas from other, far superior pieces of music. In the context of the film, the score is an over-dramatic, loud addition to the already over-dramatic, loud hunk of bloated action sequences and idiotic humour that the film possesses. On it's own, though, does Jablonsky's score work on the same level as the first and third scores did; whereas to they are so tremendously poor that they turn out as guilty pleasures? To some, that may very well be the case; as is the case with the films, for anyone who has enjoyed what Jablonsky has concocted previously should greatly appreciate what he has on offer during this effort. It's loud, mindless, over-dramatic, and complete garbage... but still an awful lot of fun! Though, this shall only be the case for a particular set of people; those who understand what they're going to get before they turn on the music, for Jablonsky gifts us with no real surprises. For those who fit into this category, this should be the most fun you've had with a Transformers score since the original 2007 release, which I still hail as a nostalgic classic. I was 7 years old people; that classifies as nostalgic in my mind! Will Age of Extinction induce headaches? Arguably, yes. Does it gift us with utterly simplistic themes which are either too obscure to recognise, or far too blatant in their execution? Certainly! Is the lack of genuine instrumentation frustrating at times? Of course, but you should be anticipating this from Jablonsky. Nothing here screams reinvigorating for the franchise, as Jablonsky had promised us. But is that necessarily a bad thing? Would I rather that the score fly off into completely new and unknown territory, when we're already thoroughly entertained with the current formula still at play? Personally, unlike my thoughts in relation to the film, I find this continuation of the preexisting Transformers music to be a good thing.

Though don't believe that Jablonsky has completely recycled the previous scores, though this is the case for a majority of the running time. He has produced relatively new themes for this album, the most obvious being his villain theme for Lockdown. Appearing primarily in Cemetery Wind, Your Creators Want You Back and That's a Big Magnet, it's a rather simple theme, composed of a 5 note string motif at it's core which constantly ostinatos, whilst heavy electronics and percussion play the background riff. It's far more blatant than any of the previous Decepticon themes, leaving it more accessible, and rather addicting. Whilst the indulgence in repetition may leave some listeners irritated or annoyed, I can say that the extended playtime of this theme, whenever Jablonsky decides it's use is necessary, isn't rather welcome. It's a stupid, fun theme, that doesn't have too much going on within. Actually, that's a rather good description for the entirety of this franchise's music. Nonetheless, the Lockdown theme is an interesting, decent piece of thematic material, that I will approve of. The Tessa theme, on the other hand... what happened? Jablonsky tries to go all dramatic on us with the vocals, and it doesn't work at all! Imagine Dragon's vocalist Dan Reynolds was called into provide some rather over-dramatic vocals for Mark Wahlberg's character's daughter, who is one of the weakest characters in the entire film. Her thematic material is best identifiable with a wistful vocal melody delivered by Reynolds, which is not only meant to be a theme for Tessa, it seems, but a theme for Wahlberg's character and home as well. This would therefore allow the film and score to go hand in hand in the Texas aspect; from all accounts, Bay's interpretation of a wistful and serene Texas countryside is rather false, and the material Jablonsky provides replicates Bay's vision far too well. It's a piece of material which doesn't work at all with the overly electronic tone Jablonsky takes in regards to the rest of the score.

Other themes reappear, including the classic Autobot theme, within the cue The Legend Exists. I will admit, it was a pretty spectacular moment when that theme did arrive in all it's classic Jablonsky blatancy, and unusually authentic instrumentation in regards to the brass section. It was a good callback to the previous scores, and represents a highlight for this score. What seems like the main theme for this installment, another vocal portion of the score from Dan Reynolds, though this time with lyrics, is displayed most prominently within the rather poor cue Honor to the End, and it's a rather lackluster, impressive piece of melody. The theme is the focal point of the end-credits song, Battle Cry, which I would urge you to skip; the lyrics seem to be irritatingly offbeat, and for someone who despises Jay Z for this precise reasoning (Unless he's collaborating with Kanye West), this specific song didn't add anything to the rest of the album. Thematic-wise, that is all that can be said from what I've heard; Jablonsky does appear to reuse a number of minor motifs all throughout the score, though for what these minor motifs represent, I cannot say. This, for one, is possibly the most irritating aspect about this entire score; coming off something as polished and dazzling as How To Train Your Dragon 2, everything here feels repetitive. Jablonsky continually takes the mentioned minor motifs, and repeats them over and over throughout any given cue; as was the case with the previous scores, this can tire listeners quite quickly.

Listeners should be aware that despite my misgivings, however, I did quite enjoy Age of Extinction. On a technical front, which I will rate the score upon primarily, this fourth installment into the Transformers franchise proves to be nothing more than your common Jablonsky electronic effort. It's not particularly inspired, varied, or unique. But on a scale of enjoyment, Age of Extinction did give me a lot to appreciate. Sometimes the over-indulgence, paired with the bashful and unrelenting synth does work out for the better. And seeing as Jablonsky did have skilled composer Joseph Trapanese working alongside him for part of the score, this is not too surprising; Oblivion was my favourite score of last year, and M83 and Trapanese's use of electronics within that body of work was unmatched by anything else from 2013. Age of Extinction holds a great deal of surprisingly impressive and fun highlights, as is to be expected, and it makes for a positive 77 minutes of entertainment. Unlike the film Jablonsky scored for, everything we expected is here, and for the most part, that is a positive. The Legend Exists and Leave Planet Earth Alone are cues which perfectly showcase the versatile and enjoyable components in regards to the electronic material Jablonsky is capable of producing well. There's too much wrong with the score to even consider a positive rating, though a middle-ground grade for Jablonsky's efforts this time around seem appropriate. Take it for what it is, criticise the obvious, but appreciate the fun in store. Transformers: Age of Extinction is available for purchase at Amazon and iTunes, here and here.