THE BOOK OF LIFE Score Review Check it out... if you're interested in a vibrant and entertaining Spanish-themed score, filled with music of all paces, tones and moods; a step up in quality from composer Gustavo Santaolalla if ever there was one

Skip it... if you'd rather not indulge in a score filled with often slow guitar, simplistic themes and a great lack in darker material 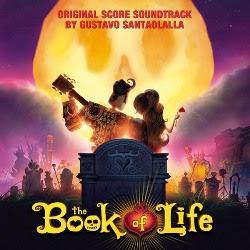 "Whilst perhaps not as infectiously entertaining as other animated scores released this year, The Book of Life is a thoroughly enjoyable score to sit and listen to"

Produced by Oscar nominated director Guillermo del Toro, The Book of Life is a 3D animated film from the animation studio Reel FX (responsible for this year's Free Birds), and is directed by Jorge Gutierrez. Sporting Spanish-influenced animation, full of bold, vibrant and exquisite colours and detail, The Book of Life has been embraced for its aesthetic component, whilst partial criticism has been dealt for its story's lack of depth; the film tells the story of Manolo, a conflicted hero and dreamer who sets off on an epic quest through magical, mythical and wondrous worlds in order to rescue his one true love and defend his village. Whilst it hasn't received nearly the same quantity of publicity as other animations released in 2014, such as How To Train Your Dragon 2, The Boxtrolls or The Lego Movie, The Book of Life has garnered relatively impressive critical and commercial acclaim since its release. Hopefully, the film will inspire more animation studios to undertake new and original art styles for their films, as The Book of Life's invigorating artistic direction is a wonderful change for someone who has seen numerous animations all throughout this year of film (though I'm yet to check out The Boxtrolls, a film by the same studio that did the astoundingly well constructed stop-motion animation Coraline). Scoring the film is Gustavo Santaolalla; a man of whom I've only just become familiar with. The man is best known for his contributions to the films Babel and Brokeback Mountain, both scores for those films earning him Oscars wins within back-to-back years. And as I've quickly come to realise, both are decisions many scoring fans rather resent; the pair of scores are considered far less than exemplary by the vast majority of score reviewers far and wide. Often labelled a composer with little variety or talent, thanks to his constant guitar/string combinations, Santaolalla generally doesn't bode well with the majority who populate the scoring community.

For those who are familiar with the composer's prior work, it shan't be a surprise to hear that his usual techniques (guitar-based thematic material, simplistic string leitmotifs) have returned in great prominence within The Book of Life, though one should expect to hear something far more vibrant and vivid than anything demonstrated within any of his prior works within film composition. The score, like the film Santaolalla is scoring for, is filled with blissful and elegant composition, that can also turn relatively fretful and exciting in a moments notice. Far faster than his prior works, The Book of Life sports a range of compositionally and instrumentally-sound music, full of highlights all throughout; perhaps not highlights that will be discussed come end of year, but certainly highlights worth acclaim. Utilizing a number of Spanish influences to help construct a soundscape that reflects the environment of the visual medium he's scoring for, Santaolalla manages to implement a flavour and distinct taste that seems relatively original in-and-amongst the crowd of animated efforts released within this past year. Whilst certain resemblances may be able to be amassed (most notably comparisons to John Powell's constantly dynamic Rio 2, also released this year), the style undertaken for this here project seems individual enough so as not to distract a listener throughout its moderately long 49 minute duration. From the beginning of the score, 'Special Tour', it's adamantly clear that the score will feature a number of energetic tendencies, as the percussion is instantaneously zealous, the strings dramatic and sweeping, and the guitar and woodwinds working alongside each other to set a delightful mood. To add to this already well-conditioned first impression, Santaolalla correctly decides upon the use of a number of Spanish-themed instruments, though they are far less numerous in this initial offering. Nevertheless, the opening of the album should immediately excite those who desire more for the composer, and wish to see the true extent of his skills.

As we move on, we see a number of recurring motifs and themes come into play, the two most obvious immediately recognisable in the cues 'The Book of Life Theme' and 'Visiting Mother' (though the theme that appears in the latter cue is officially recognised in the next cue, 'The Lullaby Theme'). The primary theme which appears in 'The Book of Life Theme' begins with a slow guitar theme, simplistic in nature, building to include violins, as well as bongos and other Spanish-like percussion. As the cue continues onward, a flamenco guitar becomes more obvious in use, accenting this now familiar flavour of music, becoming more and more entertaining as the cue rolls on. The music undertakes a number of bridges before arriving to a relatively dark brief portion of the cue, shifting quickly afterwards to a more lighthearted mood. The next theme, the lullaby theme, appears initially in the aforementioned cues 'Visiting Mother' and 'The Lullaby Theme', and is centred around a female vocalist (Ayana Haviv, to be exact), whose sweet and endearing singing is utterly mesmerising; the phrase she performs is delicate and beautiful, and its reprise is always welcome. Other various leitmotifs and key phrases appear throughout, though I've been advised that the next primary theme appears within the song 'The Apology Song', performed by Paul Williams. Relaxing and low-key (until its reprise in the finale to the album, 'The Apology Song Latino Americano'), the theme appears numerous times within the score, slightly more elusive than its thematic brethren. Spotted initially (I believe) within the cue 'The Tale Begins', it is expanded upon in cues such as 'Ole!', 'Victory/Don't Forget Me' and 'The Maze', the latter suggestion proving to be an especially evasive inclusion of the leitmotif. Other motifs and phrases can be heard throughout, from a triumphant trumpet finale in the cue 'El Aparto/Land of the Remembering', to an exhilarating and especially entertaining rock showcase within 'Chakal' (which wouldn't sound overtly out of place on a Muse album, to my absolute delight!), to string and guitar phrases that occur all over the place, from 'Maria Agrees To Marry Joaquin/Travelling to the Cave of Souls', to 'Welcome to the Cave of Souls' and beyond.

Spanish themed instruments, from the previously mentioned flamenco guitar, to the accordion, to a possible number of uses of the harmonica; ethnic flutes, bongos and other varied percussive instruments; all of these make appearances throughout. The identity of the album as a whole is therefore relatively singular from the onset, the instrumentation as accurate to the locations and culture of the film as one could expect. As made mention earlier, the choices in regards to instrumentation may very well lead to comparisons between this here album and Rio 2, John Powell's first animation of 2014. The difference though lies in the speed and pacing of the score; Rio's frantic energy was something of a delight to behold, whereas The Book of Life takes a lighter and less rapid approach, instead dedicating much of the scores running time to slower and more heartfelt music. Unfortunately, the album does seem to drag at various points, rendering the listener unentertained for certain portions. These aren't overtly common; in fact, the vast majority of the score is compelling. It's just some relatively short portions which threaten to undermine the fun and enjoyment had all throughout. The music also seems to lack a strong array of darker material; whilst a number of cues, such as 'The Maze', 'Special Tour' and 'The Tale Begins' display short passages of darker and more confronting material, it's a rare inclusion in an otherwise happy, colourful and vibrant release, which somewhat disappoints me. I'd have liked to see a greater quantity of more sinister or ominous music, as much of the album is relatively passive in its approach. Mournful music, on the other hand, is certainly not lacking though; 'Maria is Gone' and 'Manolo is Alive' being key examples of such. Powerful string phrases litter these cues, expressing the characters emotions with great vigour.

Ultimately, whilst perhaps not as infectiously entertaining as other animated scores released this year (and who could blame Santaolalla; he's releasing a score for an animated film within the same year as Powell's sequels to Rio and How To Train Your Dragon), The Book of Life is a thoroughly enjoyable score to sit and listen to. I myself had a great time traversing the Spanish-influenced soundscape, elated to find myself experiencing a story which seemed to have emotion infused within every turn. Doubters of Santaolalla may be shocked to find such praise being granted to his efforts; The Book of Life does harbour many of his infuriatingly unoriginal and overtly simplistic tendencies, though the mix of spirited uses of such tendencies, as well as variations for instrumentation and tone make The Book of Life entertaining and fast enough to serve as a wonderful addition to any score fan's collection. For fans of Santaolalla prior to this installment into his discography, I can't say whether or not you'll appreciate this piece of work; it's certainly not in the vein of his usually minimalist projects, so if you're looking for the type of music that won him awards 8 years ago, you may very well be disappointed. For everyone else unhappy with the composer's output in previous years, The Book of Life is a breath of fresh air for a composer with a flawed history within the scoring community. You can purchase The Book of Life on Amazon or iTunes, here and here.