Check it out... if you greatly appreciated The Leftovers, or desire a score which seeks to envelope you in its being and provide an emotional, heart-wrenching experience

Skip it... if you desire complex, lavish or fast composition, Testament of Youth proving to be anything but 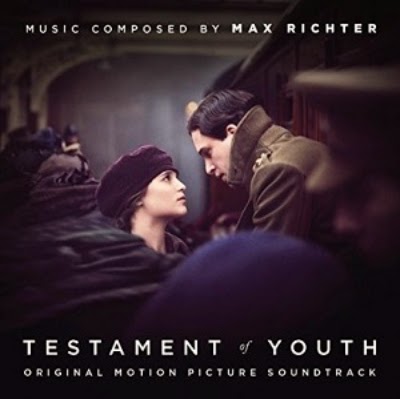 "It's a dangerous and difficult journey, and perilous to a fault, but what Richter achieves is a sense of pain and ardour; one that is felt all throughout."


What one could consider a great example of an immensely obscure, quality picture, Testament of Youth is a film directed by little-known filmmaker James Kent, whose work has previously been considered as little more than acceptable. Now comes perhaps his most adulated work so far; an adaptation of a World War I memoir that centres around a woman's plight in terms of providing aid to her countrymen, engaging in a romance with Game of Thrones' Jon Snow (how did he manage to find time to duck down to modern day Europe?) and living amongst a war which threatened to engulf the entirety of modern civilisation. With screenwriter Juliette Towhidi, another relatively undistinguished individual within the business, penning the screenplay for the picture, Testament of Youth has proven majorly beneficial in terms of commercial success for all those involved. Receiving approval from the vast quantity of critics and audience members alike who have been gifted the rare opportunity to view the picture, it appears this film will go under-appreciated by the majority of the general cinema-going fare. What refuses to go unnoticed by the scoring community, on the other hand, is any new Max Richter work, especially after he received a flood of attention for his release of The Leftovers last year, which many have agreed is a highly passionate and well-executed score. With few major releases occurring in January, there has been little to look forward to, with Testament a major exception; with Richter having undertaken compositional duties for the picture, fans of his work or that of The Leftovers in specific have been overtly excited, none more so than your trusty reviewer here!

A slow starter, Testament eventually pays off to an acceptable and even highly commendable standard, producing emotional tribulation, intelligent forms of instrumentation and a large variety of tones. That said, it lacks complexity in its writing (even for Richter), and the thematic material is never truly distinct nor greatly laudable. The sound quality of the entire album is also not as high resolution as one comes to expect from scores penned by a composer of the likes of Richter. All the same, Testament is an enjoyable amass of quality work, that whilst not as wholly satisfying as The Leftovers, proves suitably poignant at various intervals. Highly reminiscent of the sweeping and lavish work from Johann Johannsson for his work for The Theory of Everything (recently nominated for an Academy Award, and deservedly so), Testament doesn't work as well a whole experience as one would desire, but contains its fair share of individual highlights that prove to be especially praise-worthy; from the seventh cue onwards, 'Each Others Minds', the score is generally impressive, Richter balancing the carefully composed World War I-themed tone alongside tragic string and piano melodies that reflect the emotional turmoil faced by not only the main protagonists of the story, but the entirety of European civilisation; a civilisation facing pain and remorse constantly during the time period depicted.

Richter seems to take influence from a number of appreciated and notable sources, the links to The Theory of Everything easily identifiable, with other more subtle ones becoming more and more apparent as the score trudges forth. Comparisons to Alexandre Desplat's The Tree of Life are easily distinguishable, namely within 'Action at a Distance', 'Vergissmeinnicht' and 'Departed', due to the utilization of a motif that features a heavy piano drop whose initial two notes instantaneously remind me of Desplat's effort (2:11 minutes and onwards into 'Circles' within The Tree of Life is the portion that feels just partially plagiarized here). Even a progression in the latter two cues aforementioned feels taken directly from James Horner's Avatar. The entirety of 'A Duet for Three' sounds oddly familiar to that of Johannsson's 'The Wedding', especially in regards to their comparable violin work; the cues are only separated by a second in length, even! Also, as an afterthought, a three note progression motif, seen immediately within 'No More Fear' and 'These I Send To You' is clearly taken from a composition that I myself had already wrote, so plagiarism is obvious; that, or Richter seems to have as good an ear for a slight melody as I do. We think alike, that German and I! All that said, despite constant comparisons, Testament of Youth does feel enough like its own product to reserve appraisal in its more wholly original and outstanding moments. Whilst I have blatantly criticised its lack of creativity, it's hard to fault the emotional gravity of a cue like 'Departed'; the heavy reverb and brooding instrumentation of the piece resonates utterly with myself. It's just a shame to see a talented composer of the likes of Richter sounding like other talented composers; his own individual methodology seems to take a step-back in this context.

Where Testament shall find legions of fans is where Johann Johannsson wasn't able to seduce the entirety of the scoring community; those left unresponsive from the impact of The Theory of Everything shall find much to approve of within Testament of Youth. The fluttering, graceful, swirling nature of Johannsson's composition is sacrificed for a more emotive effect, the compositions less nimble but heavier in terms of their intended sentimental impact. And when Richter wants to deliver a passionate piece of music, he does so without hesitation. His highly meritorious approach to ambiant composition proves harrowing and justified, his use of reverb and soundscape helping to envelope the listener in an experience which puts them in the shoes of the protagonists of the visual context. It's a dangerous and difficult journey, and perilous to a fault, but what Richter achieves is a sense of pain and ardour; one that is felt all throughout. For listeners who are less concerned with complexity in both general writing and thematic concepts and incorporation of such, Testament of Youth comes highly recommended. For others desiring music with the dexterity of prior releases from this year, you may be left feeling cold. If so, I implore you to listen and feel, instead of thinking; Richter wants to provoke an emotional response, and if you're willing to gift him the opportunity to do so, he can achieve wonders. 'I Will Not Forget You' achieves lyrical perfection, the grace and heartache displayed in the various layers of the string ensemble on offer proving immensely effective. An often captivating but lacking work, this comes recommended for fans of Richter and those desiring emotionally potent works of musical ingenuity. You can purchase Testament of Youth on Amazon or iTunes, here and here.