Check it out... if you possess a desire for something slower, more emotionally attentive and instrumentally diverse, Timbuktu providing complexity in all of these areas

Skip it... if you lack the ability to be able to appreciate poignant and less intricate works, as whilst the composer, Amine Bouhafa, establishes numerous layers of instrumentation over any central phrase, his continued repetition throughout of these central phrases can prove slightly tiresome 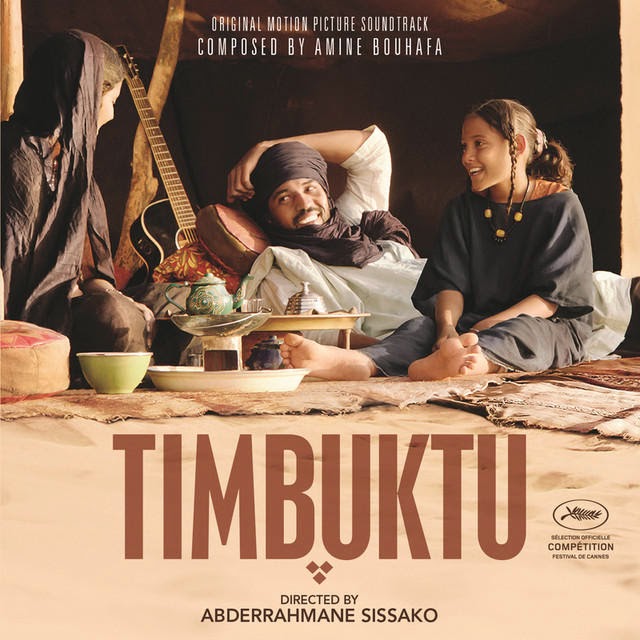 "This is an affecting, varied and understated collation of music that proves admittedly pleasant, easy-going, beautiful and appreciable"

Opening to limited audiences in May of last year, Abderrahmane Sissako's latest directorial feature Timbuktu has passed through approximately 34 film festivals that span from Cannes to Paris, to Canada, Jerusalem, New York and so on, before finally being given the opportunity for a wide release within the US cinema branch just recently. Dazzling reviews from both critics and audience members alike have seen a rise in interest from domestic viewers, and a nomination for Best Foreign Language Feature at this year's Academy Awards ceremony has fortunately increased the exposure of the picture exponentially. Telling the story of a cattle herder and his family who preside in the dunes of Timbuktu, a normally peaceful area, the film associates with themes of third-world poverty, religious extremism and intolerance as Jihadists who determine to control the faiths of those who live within this region start to unsettle the inhabitants. Relatively inexperienced composer Amine Bouhafa was recruited to handle the musical component of the picture, and his work has received a criminally poor reaction in terms of quantity; virtually no one has discussed his efforts. The underappreciated album was released in December of last year, and I seek to rectify its lack of attention by providing it with some much needed appraisal!

Utilizing an ethnically-based palette of instrumentation sorts, Timbuktu is a compelling, heartfelt and deeply sentimental assortment of music that encapsulates the peaceful mood of Timbuktu (the location), as well as the aggressive and dangerous Jihadists who serve as the antagonists of the picture. A carefully orchestrated balance of woodwinds, percussion and strings, both contemporary Western, oriental and Malian in origin, help bring to life an immensely intelligent array of compositional efforts from Bouhafa, who captures in musical form the major events of the occupation of Timbuktu in early 2012; an occupation that lasted ten months. He captures the culture on offer in all its earnest, but never fails to elicit fear from the viewer as the dangerous opposition of the picture enforces their harsh and brutal dominion over the peaceful populace of the area. Bouhafa's efforts are slow and meticulous, his vision for the score becoming clear over the short but effective half an hour length. The album is concise and to the point, nothing overstaying its welcome (which is especially appreciated in-and-amongst works which seem to drag for what resembles an eternity; i.e. Jupiter Ascending), so one is prone to staying attentive all throughout the running time. And whilst it is rendered of relatively simplistic constructs, its melodies, pace and compositional concepts all undeniably non-inventive, it is an affecting, varied and understated collation of music that proves admittedly pleasant, easy-going, beautiful and appreciable.

Centered around a fundamental thematic conception that is presented within the fascinating and wonderful song 'Timbuktu Fasso' (the song provided twice with lyrical accompaniment in the album, and once as an instrumental offering), Timbuktu is rather minimal in terms of the quantity and development of major leitmotific statements on offer. Minor ideas are presented all throughout, some more notable than others; an eight note guitar phrase repeated over much of the duration of 'Shooting the Statues' which is brought back again within 'Zabou' for a more piano-centric version; a central 2 note string phrase within 'The Spiritual Dance'; a 3 note duduk leitmotif from 'The Lake' is reprised within 'Killing GPS' for a spectacularly emotive effect. The preliminary and latter motifs are perhaps the only two which receive substantial expansion throughout the duration of the album, and they are still rather slim in technical dexterity. For those prone to listening with complexity at the header of their requirements, Timbuktu will prove utterly lacking.

Also somewhat lacking are its general constructs, which prove repetitive. Cues typically do not encompass more than two-to-three major phrases throughout their length. What will bring many through though is the sensational choice of instrumentation, which ranges from Malian harps termed as Kora's, N'Goni's, Duduk's, a wide range of flat percussion and Oud's. Not to mention contemporary acoustic guitars and orchestral performances, the symphonic portions recorded by the Prague Philharmonic Orchestra. Prague are sublime in their individual roles, and there appear to be no major (or minor) issues prevalent in terms of timing, though the recording is sometimes less than pristine, and the mixing is somewhat dry. Though considering the location of the picture, this is understandable and redeemable. Bouhafa's capabilities in terms of instrumental variation is greatly applaudable, and his balancing of the individual sections is admirable, no division of the orchestra ever overpowering another. Even the woodwinds get their time in the sun, to my delight!

Combine this intelligent employment of the various lyrical and symphonic colours on offer with a number of fast-paced, almost jazz-like phrases which ostinato for wonderful results. The opening cue, 'Shooting the Statues' features an aforementioned smooth and sensual acoustic guitar phrase which helps to immediately draw the listener in. This is followed by the first iteration of 'Timbuktu Fasso', which I believe is sung by Bouhafa and performed by Fatoumata Diawara, and it is utterly perfect. The guitar work is quick and effective, and combined with some wonderfully heavy and large bass drum beats and string entries, it's hard not to tap along to the addictive rhythm. 'Football Without A Ball' is one of the final inclusions on the album that features an up-tone mood (that isn't a reprise, for 'Zabou', as was previously made note of, utilizes the same central thematic concept from 'Shooting the Statues'), the instrumentation fun and expansive and the composition building with height and fluidity. It has a sense of innocence, youth and jubilance that is sorely missed throughout the rest of the running time (though that isn't to denote the rest as anything less than great).

It's not the most adventurous of efforts, and Bouhafa doesn't always provide much progression for his compositions, but what he does achieve is to provide an immensely sentimental collation of work that represents the location depicted in the visual format with cultural accuracy as well as fun, devastation and pain. The evil of the story features brooding melodies that slowly evolve into restrained fits of dark anger; timpanis and bass drums rolling out beats which echo throughout all the mix. The central character's deliberations, difficulties are represented with slow and carefully constructed phrases which provide emotional bursts of energy. All the same, there are moments where Bouhafa's work is especially impressive, the pace and beat of their pieces variable and entertaining. This is a well-rounded, however simplistic album, that whilst not wholly compelling, is utterly worth a listen due solely to the sheer diversity of the instrumentation and the emotive value. A great score by most standards! You can purchase Timbuktu on Amazon here.