Check it out... if you're a fan of the bombastic, basic chord progressions oft-times associated with the sound of RC composers

Skip it... if numerous references to compositions by Balfe's own Remote Control collaborators prove too monotonous and derivative for your taste 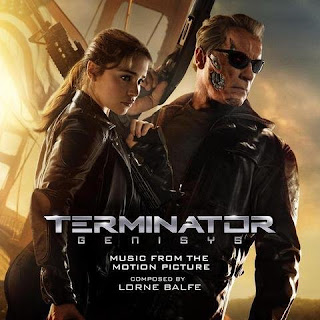 "Terminator Genisys is unabashedly orthodox when it comes to its sentimentality, but Balfe is competent enough when it comes to action that it would be hard not to find at least something to enjoy."

After the creatively dismal and critically rebuked Terminator Salvation, the Terminator franchise, originally pioneered by James Cameron's award-winning and delectable vision, went into yet another brief state of hiatus before being revitalized with this year's universally panned Terminator Genisys. Despite being led by the deft hand of Alan Taylor (Thor: The Dark World, Game of Thrones), the film, muddled in presentation and visually despondent, has disappointed both newcomers to the series and long-time fans. Not even the presence of Arnold Schwarzenegger, who opted out of participating in Salvation due to his doubts about the screenplay, can aptly imbue excitement into an inherently faulted film. This fifth feature in the franchise serves as another instance where audience expectations have not been met, further contributing to the unreliability of each new installment. Accompanying the turbulent nature of the film series are a range of scores, arranged by various composers, that have always been received with moderate aversion; whether it be the grating synthetics of Brad Fiedel's initial two offerings, the lacking melodic sensibilities of Marco Beltrami's Terminator 3: Rise of the Machines, or Danny Elfman's tonally dissimilar continuation for the aforementioned Salvation, there are many who possess a disdain for the Terminator franchise's music.

For Genisys, Alan Taylor sought the skills of Lorne Balfe; a composer whose workload has been exceptionally extensive for the past calender year. Eleven 2015 films have been released with his musical voice attached, and he still has The Captive to come in September. His output is not always the most inventive, nuanced nor versatile, many of his releases critically rebuked for their lack of individuality. But this year has also seen the man compose enjoyable and occasionally brilliant scores for Home, Above and Beyond and Blackwood, the latter most title a particularly well-regarded piece that demonstrated the composer's capacity for dazzling, atmospheric writing. After that positively commendable score, Terminator Genisys comes as a grounding force; a reminder that Balfe is also capable of producing underwhelming material which wholly lacks identity. Genisys is a product of the Remote Control Production influence, the mixing and thematic propensities of fellow RC members discernible within the tapestry of this here album. References to founding member Hans Zimmer's most popular works (The Dark Knight, Man of Steel, Inception) all appear in vast quantity (a number of string swells in the opening track, 'Fate and Hope', feel directly reminiscent of phrases from 'I'm Not A Hero', from The Dark Knight); the action string melodies presently associated with Junkie XL's Mad Max: Fury Road make brief appearances within a number of action tracks in this context. But the most blatantly appropriated methodology is that of Steve Jablonsky's, the loud, roaring and bombastic synthetics found throughout all the Transformers scores entering the fray within the opening few moments of the duration. Genisys feels less like a Lorne Balfe composition, and more a collaborative effort that possesses a complete lack of distinction. Had it been written by any other RC composer, the result would have been predictably similar.

That said, the output isn't inherently bad, per se. The references to other works and the familiar stylistic nuances of the mix mean that it's virtually impossible to miss the sources of stimulus for each individual track, but that doesn't negate the quality of the material on its own merits. Terminator Genisys is unabashedly orthodox when it comes to its sentimentality, but Balfe is competent enough when it comes to action that it would be hard not to find at least something to enjoy within instances of such. The recording is sublime, no matter the quality of the written material, and the mixing and mastering accentuates the size and magnitude of the orchestra. The electronics are successfully weaved into the organic elements, and the usual criticisms of the reliance on percussive elements that allows arise during discussion of a modern RC score are disposable, Balfe working hard to articulate the string and brass sections accordingly. The successive action tracks, 'Work Camp' and 'Bus Ride', both possess a rich sound quality that makes them simply infectious. The chord progressions on offer within these and many other action pieces aren't particularly advanced in terms of technicality, but they are dizzying in content; at his finest intervals, Balfe loads up the score with an extensive instrumental palette, adding intensity and vigour to what could have been a cut-and-paste score. Despite the plethora of unoriginal references, Balfe does manage to instill within his work some jubilant, energetic fun, which is more than I can say about a number of his contemporaries, whose output recently has felt dry and under-cooked.

At the end of the day, Balfe has been offered a stock recipe by his colleagues, and his considerable compositional proficiency has allowed him to render his concoction an applaudable recreation. It's not at any length distinctive, and its personality feels separate from Balfe's own musical character, but taken at face value, it is relatively entertaining. I am stuck in the middle of two groups; one, a collection of individuals who triumph the sound of your usual RC score, and the other the exasperated detractors who resent the lack of creativity this group promotes. My inherent cynicism aside, I do rather enjoy Terminator Genisys. I'm not going to pretend that I appreciate its generic chord structures and schmaltzy thematic material on an intellectual front, but I find it hard to rebuke, solely for its sound and rousing instrumental spectrum. I can't help but hum alongside the brass section as John Connor's David Arnold-esque Americana theme blares during 'John Connor', and the string section's pained performance within 'If You Love Me You Die' seems to elevate cliched material by providing adequate doses of sincerity and anguish. So despite the meal looking and tasting similar to those prepared by a range of other chefs, you can't disregard the effort that went into arranging the various materials included into a cohesive product. Technically sufficient, but undeniably faulted. You can purchase Terminator Genisys on Amazon or iTunes, here and here.