____
Check it out... if you're interested in what could be termed a more intellectually satisfactory, melody-driven and entertaining Social Network

Skip it... if you're opposed to successful synthesis of numerous, dissimilar genres and styles, Steve Jobs a score filled with contrasting concepts from the onset
____ 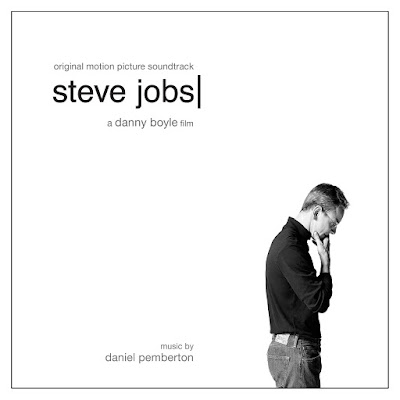 "Here, his capacity for creative and perceptive composition is realised, and packaged in a bundle that showcases all the wonder lying within."

For the second time in as many years, Hollywood offers audiences a look into the life and personality of celebrated visionary Steve Jobs; the man responsible for the Apple brand and company. His influence on modern culture and society is near-unparalleled, devices of his making having altered the way we interact with our fellow human beings. In 2013, the first large-scale cinematic depiction of Jobs' life, Joshua Michael Stern's Jobs, was released, to overwhelmingly negative reviews. Criticised for its drab performances, overly-sentimentalised plot, and conventional roots, the film was critically mutilated, before being quickly removed from the public conscious. 2015's Steve Jobs promises to be an entirely different affair, the Danny Boyle directed feature provoking wide-spread appraisal, much of it addressed towards the subtle and intelligent performances, and Aaron Sorkin's witty, engaging screenplay. Considering the film has already accumulated notable award buzz, it is no surprise that Daniel Pemberton's rhythmic, dazzling, and entertaining score for the picture has been discussed at length by film music commentators and analysts alike as a possible contender for the Best Original Score category at next year's Academy Awards ceremony. Wholly worthy of commendation, Pemberton's efforts for Steve Jobs are sharp and astute, and help to further the composer's growing reputation, bolstered previously by his work on this year's The Man From U.N.C.L.E; a well-received homage spy score. Whilst U.N.C.L.E was a solid, nuanced pastiche that offered an immensely fun ride, Steve Jobs is a piece of music that promises to be as influential as some of its biographical brethren come before; think The Social Network. This is a magnificent composition.

Pemberton's precursory works have exposed a composer full of technical aptitude; his ability to entwine together textural and melodic elements in cohesive fashions is a valuable asset to any film composer's repertoire, and pair that alongside knowledge and skill within a vast range of genres, and you have a writer whose potential is virtually unbound, if given the right project. Steve Jobs is that project. Here, his capacity for creative and perceptive composition is realised, and packaged in a bundle that showcases all the wonder lying within. From heavy electronic manipulation, to discordant symphonic textures, to stunning orchestral crescendos; Steve Jobs has everything you could ever desire from a Pemberton score and more. And that's only when you're discussing its value as a solo album; in the context of the film at hand, it is gifted a wealth of thematic substantiation and meaning. The metaphor of a conductor guiding an orchestra through a performance is cited all throughout, making blatant reference to Jobs' role in both the film, and his own company. Pemberton weaves a vast tapestry of ideas that extend beyond your basic leitmotif, to fully explore the characters of the visual content.

The plethora of ingredients that permeate the length of Steve Jobs begin with the dissonant consistency of the opening track, 'The Musicians Play Their Instruments...'; here, the ensemble tunes themselves, the first of many instances where the "conductor" analogy makes an appearance. Pemberton follows this unusual track soon after with the forceful 'It's Not Working', a cue defined by its central, pulsating ostinato, that is fitted with enough nuance and gradual development to warrant approval. Electronic instruments fly in and out of the mix, surrounding the undeniably catchy synth beat that characterises this polarising and hypnotic four minute doozy of a piece. It's so far removed from the fast-paced jazz wizardry of U.N.C.L.E that it's quite perplexing on first listen. The track lacks any undercurrent of melody, relying solely on the callous nature of the rhythmic components. It seems to bring out the perfectionist attitude that Jobs was so famous for; Pemberton is sonically replicating the process the protagonist went through when editing his creations. Through the incorporation of minute variations, he establishes a sense of perpetual growth that lacks anything that feels truly weighty.

The converse of 'It's Not Working' is the fabulously poppy 'Jack It Up'; a piece which takes the percussive essence of the prior track and "jacks it up" with a two-note woodwind riff that adds a sense of life that was purposefully suppressed on 'It's Not Working'. It's a track which immediately provokes comparison to Trent Reznor and Atticus Ross' 'In Motion', thanks to the ostinato format of the piece, but it overshadows this track in sheer inventiveness; the wide array of nuances and variations that litter the cue's duration offer a sense of definitive progress, and maintain a listener's attention all throughout. From the introduction of a modern drum loop, to distorted buzz-saw basslines, 'Jack It Up' is the kind of woozy, infectious piece that attracts attention from the general public, but doesn't forsake melodic integrity in the process.

The "conductor" concept returns to prominence later on in the score with 'The Circus Of Machines I (Overture), 'The Circus Of Machines II (Allegro), and the aforementioned 'The Musicians Play Themselves...' direct subsidiary, '... I Play The Orchestra'. Pemberton establishes a classical influence with these cues, and his dynamic, vibrant and sweeping orchestrations allow a listener to easily visualise the music in the context of the film; the image of Jobs moving about in a frenzied manner, hell-bent on perfecting whatever he feels he needs to perfect, is one that immediately springs to mind, thanks to the initial staccato bursts of stringed energy within 'The Circus Of Machines I (Overture)'. These elegant symphonic elements take on a new light in some of the album's more emotional of instances, such as on the gorgeous 'Russian Roulette', the Interstellar-esque 'The Nature Of People', and the score's stand-out moment, the ten-minute masterpiece that is 'Revenge'. Balancing periods of minimalism with the most bombastic of orchestral composition, 'Revenge' finds Pemberton at his most chilling. From shocking piano drops to soaring swells of the whole ensemble, Pemberton evokes the styles of Philip Glass, Abel Korzeniowski and Marco Beltrami (some of the most prominent chord progressions are reminiscent of Beltrami's work on The Giver) in one of the album's most astounding moments.

The composer also makes references to the nostalgic sounds that make up the years and decades that the film covers. The boisterous synthetics that form 'The Skylab Plan' hearken back to the sounds we associate with the late 80's, and the forward-driven, distorted pattern that makes up much of '1998. The New Mac' is reflective of the piece's title year. Pemberton manages to successfully merge together these disparate styles in a manner that feels cohesive and purposeful. Steve Jobs is full of conflicting ideas that manage to gel harmoniously under the watchful gaze of the composer; he compliments industrial pop with lively classical writing, and atonal atmosphere with melodic symphonic passages. He loses points for the conventional and dull 'Remember', and the lack of emotional stimulation on 'Child (Father)', but for the vast majority of the running time, Pemberton offers no less than seriously impressive music. Whether you are a casual listener or an avid collector, Steve Jobs is bound to cater to some measure of your tastes, and is a delightfully inventive piece of music. You can purchase Steve Jobs on Amazon or iTunes, here and here.

Additional notes about release: the album comes with an additional two songs; 'Grew Up At Midnight' by The Maccabees, and 'Shelter From The Storm', by Bob Dylan. The iTunes copy has a digital booklet.