____
Check it out... if you're a fan of the style that composer Hans Zimmer cultivated for the highly controversial Man of Steel

Skip it... if what Zimmer concocted for Man of Steel disagreed with you, for both he and Junkie XL double down here on what made that score so contentious
____ 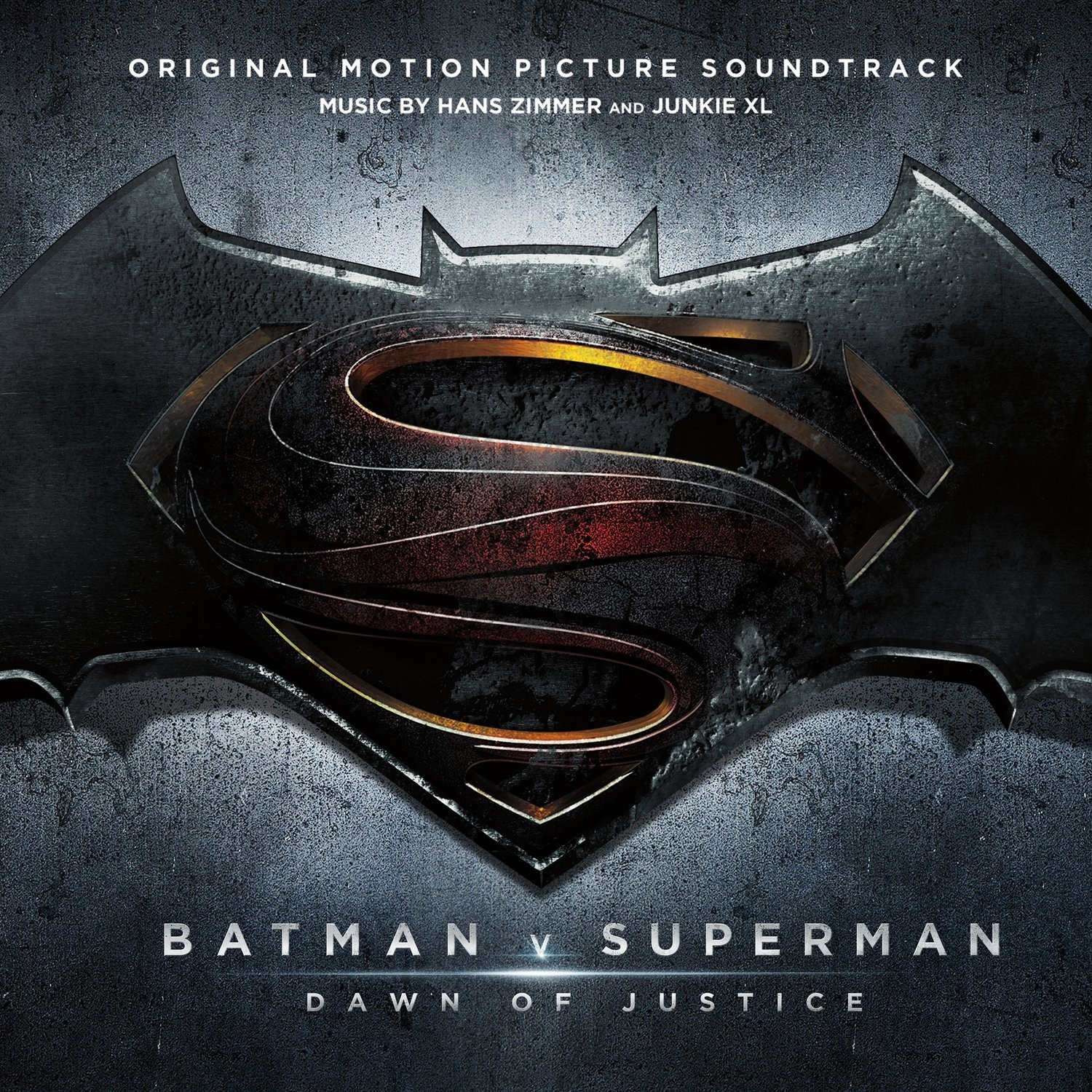 "This is a divisive album, filled with divisive music, composed by divisive composers."

NOTE: THIS REVIEW WILL NOT CONCERN ITSELF WITH DELUXE BONUS TRACKS.

If Batman v Superman: Dawn of Justice, the latest installment in DC's cinematic universe, is proof of anything, it's that the world of cinema is full of absolutes; at least in today's market. Mediocrity does not represent indifference or adequacy; mediocrity's connotation, with regards to modern film discussion, is "horrendous", or "appalling". Referring to a film as "good" means that you proclaim it as a masterpiece, and revere it as a form of higher art. There is no longer a middle-ground; if you want proof of this, just visit the IMDb message boards surrounding this feature. Sure, you'll find small passages of intelligible dialogue between commentators, strewn about at an inconsistent regularity, but the vast majority of the posts that litter these message boards feature mindless argumentation, penned by both needlessly sensitive fans and detractors of the film, who seem to only be capable of dealing in definitive viewpoints. Batman v Superman is nothing exceptional, but it's certainly nothing significantly terrible. It starts strong, but it ends poorly. Its cinematography is sporadically gorgeous, but frequently feels lazy. The performances from Ben Affleck, Henry Cavill, and Gal Gadot are all sublime, but Amy Adams and Jesse Eisenberg overwork the material, and come across as melodramatic. The action is relatively entertaining, but lacks awe. It sits on the fine line between good and bad, and at the end of the day, it's nothing that will markedly influence superhero films in the years to come, part its own sequels. It's frankly astonishing to see people come out and criticise/acclaim this feature with adjectives that clearly illustrate a complete, 100% lack of objective observation. Film is a subjective, personal medium, that much is known; but for the movie-going community to (mostly) abandon any pretense of impartiality is somewhat irritating to see. As Dickens once said, "[the] nosiest authorities [have] insisted on its being received, for good or for evil, in the superlative degree of comparison only."

The same could be said of the score to this feature. You could be forgiven for misinterpreting some critics' reviews as hyperbolic satire, whether the writers are proponents or disparagers for composers Hans Zimmer and Junkie XL's work. But this is the reality; scores with such relentless, all-encompassing hype are bound to generate emotional responses that may or may not prove reasonable. The amount of one-star and five-star ratings floating about for Batman v Superman is astounding, but to a degree, understandable. This is a divisive album, filled with divisive music, composed by divisive composers. When I was first listening to this record in its entirety, I was simultaneously sending my live, unfiltered train of thought directly to my friend and fellow writer Vikram Lakhanpal. Looking through those initial comments and Vikram's subsequent responses, there's one thing that's abundantly clear; I cannot convince you that Batman v Superman is a good score if your mind is set against that opinion. As I rattled on about how much I was in love with the first four tracks of this mindbogglingly long juggernaut of a release, Vikram provided criticism. As I offered remarks like, "the more subtle rendition of the "Flight" theme is amazing [in 'Day Of The Dead']. The solo string work is great," Vikram responded with, "You're more easily moved by the Junkie Adagio than I am, it seems." It has never been so clearly evident to me that music is an inherently subjective form until now. Whilst I applauded the new leitmotifs, Vikram criticised the mix. While I salivated over reprises of Zimmer's Superman themes from Man of Steel, Vikram expressed remorse over how dull he found much of the album. The simple truth is this: those who enjoyed Hans Zimmer's work on Man of Steel will find an abundance to enjoy in this context. Those who did not enjoy that record will detest this here with all their heart. No amount of bickering will change that. With that extensive disclaimer out of the way, here is how I feel about Batman v Superman: Dawn of Justice.

Melodically speaking, Batman v Superman is an exemplary work. In terms of technicality, we are presented themes which are relatively straight-forward in construct; yet they prove memorable, and stand out from the rest of the material on offer. The old Superman themes from the previous score return; the Clark Kent passages, best explored on 'This Is Clark Kent' from Man of Steel, are given a splendid presentation on the fourth track, 'Day Of The Dead', before a transition into the rousing "Flight" melody arrives to end the cue in a satisfactory manner. 'This Is My World' begins with the earnest piano motif that defines Man of Steel's 'What Are You Going To Do When You Are Not Saving The World?', its major chord progression developing into a reprise of the original score's 'If You Love These People'. A slowed down reiteration of an eight-note, bombastic refrain from the same track arrives as a dramatic statement filled with ferocity, pain, and emotion, before a solo vocalist helps to lead-in to another stunning, subdued performance of the "Flight" theme. The strings are bountiful; the choir is harmonious; the piano is resonant. I find it hard not to be sucked in by Zimmer and Junkie's work in these instances.

Batman's new identity is characterised by two concepts, both introduced during the opener, 'Beautiful Lie'. The first, a piano melody that begins in the major chord, before developing into a tortured, string-accentuated minor chord motif, is a gorgeous idea that accurately exhibits the pain of Bruce Wayne's sudden transformation from a beloved child, into a damaged orphan. The gradual ostinato that permeates this opening track is driven by this tune, and it proves captivating. The second concept, an Alien-influenced horn refrain, demonstrates Bruce Wayne's solitude, and represents the character and inner-turmoil of Batman as a whole. Both melodies capture different facets of the character's personality and experiences well, and manage to elicit remorse from the listener. But the best of the new thematic concepts presented in Batman v Superman is that for Wonder Woman; her slick, electric cello-based leitmotif, first performed in 'Is She With You?', appeals shamelessly to the methodology that Zimmer and Junkie have been developing over the course of their respective careers. It is unabashedly cool.

The film's presentation of Lex Luthor forces the two composers to take an intentionally ostentatious approach to the production's primary antagonist. Luthor is musically identified by his rumbling grand piano and Austin Wintory, Assassin's Creed Syndicate-esque strings, which first appear in 'The Red Capes Are Coming'. For those irritated by the gloom and seriousness of the rest of the score, you can rest assured that the over-the-top nature of this theme will, at the very least, pique your interest.

One of the most widely loathed elements of Man of Steel returns with a passion for Batman v Superman; the notoriously loud percussion. Here, its presence occasionally feels unjust, as on the album's action centre-piece, 'Black and Blue'. But it serves its purpose well enough over the course of the score, punctuating major instances of melodic drama, to stress their magnitude. The drums present all throughout 'Is She With You?' establish a sense of momentum and pace that would be absent without them. When they drop out for a solo statement of Wonder Woman's theme, the moment is made all the more dramatic by the sudden omission of the percussion, before some jarring snares thunder back in, further emphasising this specific point.

The biggest qualm many have concerning this score seems to be regarding the mix, which is, admittedly, often mediocre. On 'Beautiful Lie', the opening brass and percussion crescendo blatantly clips, and it consequently sounds atrocious. On the latter half of 'Tuesday', there is little-to-no clarity for the synths and brass; they growl away in the background, their melodic properties obscured underneath a haze of what can only be referred to as sound. 'Black and Blue' features both adequately produced action, and completely anonymous, incoherent, grumbling bass. But it isn't all bad; the piano in 'Beautiful Lie' sounds crystal clear, and the various instruments that join to accompany it during the track's near-four minute length never forsake the definition of the mix. The ever-present, atmospheric reverb that characterises Superman's themes never overpowers the more harmonious orchestral elements during the course of the album. Zimmer and Junkie find their best balance between dissonant aura and melody on 'Problems Up Here', the final segment of which features a variety of choral, string, and brass passages operating above a heavy, claustrophobic ambiance, all in an immensely effective way. On the whole, the mix is sufficient for the most part, but has its fair share of faults nonetheless.

Despite what the title indicates, the action is not the selling point for this album; it's the slower chunks that truly connect, at least with me. The action displayed in tracks like 'Must There Be A Superman?', and 'Do You Bleed?', does very little. I don't believe that's primarily because a great deal of this action is semi-generic; I believe that's because it feels redundant after a certain point. Relentless sound desensitizes eventually. But when Zimmer and Junkie allow their material to breath, as it does on 'Beautiful Lie', 'The Red Capes Are Coming', 'Day Of The Dead', 'This Is My World', and portions of the finale, 'Men Are Still Good (The Batman Suite)', the real magic is exposed. So I would ask that listeners try to approach Batman v Superman in as objective a way as they possibly can, because I believe that there is good to be garnered from its plethora of material. But lets be honest; nothing I say will sway you one way or the other. With such an anticipated release, it's unlikely that my voice will convince you that this score is either good or bad. If that's the case, my only advice to you, my valued reader, is that you do not look upon this score with absolutes and superlative adjectives in mind. I've been there before myself; when I first awarded Man of Steel a perfect rating, I was being heavily influenced by the less critical, mainstream acclamation. I regret what I said then, and have thus tried to more objectively analyse Batman v Superman. I'd ask that you try and do the same as well. You can purchase Batman v Superman: Dawn of Justice on Amazon or iTunes, here and here.

Additional notes about release: there is a deluxe version of the album, which features a further five tracks ('Blood Of My Blood', 'Vigilante', 'May I Help You, Mr. Wayne?', 'We Were Hunters', 'Fight Night') in supplementation to the standard edition's 13 tracks. The digital release comes with a digital booklet.