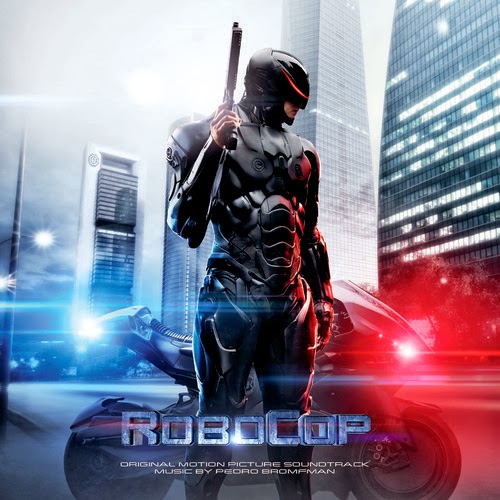 Remakes are in abundance at this point in time; last year we had the disappointing film, The Secret Life of Walter Mitty, that gave us a stilted performance from Ben Stiller, and an uninteresting story to follow. Yet still, relatively unknown composer, Theodore Shapiro delivered a very beautiful, exciting score which enthralled many, including myself. Carrie and The Lone Ranger were also in the ranks for remakes in 2013, both of which garnered negative reviews. Both, though, produced some very solid scores, the better of the two being the former; Marco Beltrami's Carrie. It seems that despite the lackluster efforts of producers and directors, remakes can produce some fairly adequate, interesting scores. I can certainly remember enjoying Carrie immensely! Robocop is Sony's next remake attempt, and it's set to most surely fail. The modernized version of the 1987 classic has been garnering negative reviews for the past few weeks, and it's release was met with disappointment; despite the fact that no one, certainly not myself at least, was expecting this to actually soar. Despite it's cast, Robocop will surely fail to prove to us, once again, that remakes can turn out well! But, with a cruddy remake, like I pointed out, can come a half-decent score. Composers who have the opportunity to create music for remakes can take inspiration from previous themes, and build upon them. It makes for an easier writing experience, as well as an easier thought process.Pedro Bromfman is a man whom you quite probably haven't heard of before, as didn't I, before listening to this. I was expecting someone like Christophe Beck to step in and helm the production of this score, but alas, that was a misled and silly wish. Bromfman is taking hold of one of the more important scores of the year, so let's see how he did.

The first question that springs to mind when talking about this score would have to be "Is it as good as 1987's Robocop, composed by Basil Poledouris?" The answer to that is a quick and universal "No!" From the first piece, Mattox and Reporters, you can quickly see how the rest of the score is going to pave out; synthesized music, distorted sounds, mixed with a fairly flat orchestral effort. When you have a composer like Hans Zimmer, it works; Zimmer knows how to use artificial sounds to their best effect. Bromfman though, does not! His music is repetitive, boring, and above all else, one dimensional. So much of this score feels like filler; only small portions feel like anything that really stands out above the rest. Sure, there is volume and catchy rhythms and melodies. But these are short and far between, and it makes for a constantly repetitive experience. Every piece feels like it's rehashing itself, over and over again constantly. Sure, it's fine if you want to use osinatos every once in a while, but constantly, all the time? No, you just can't do that! And the synthesizers; they're horrid! I simply can't stand Bromfman's unpredictable, random and irritating use of synthesizers! This partially reminds me of Jukka Rintamaki and Johan Skugge's scores for Battlefield 3 and 4, both scores which I thoroughly despise, the latter being only slightly more bearable. Both had too much a reliance on distorted, artificial sounds, which seemed almost random in the scheme of things. The same can be said for Bromfman's work here; his use of artificial sounds seems incredibly random and strangely placed. Some pieces have small reliance on it's importance, whilst others, such as the dreadful piece Fixing Robocop, dedicate a vast portion of their running time to put towards synthesizers. It's such a badly utilized tool, that Bromfman should certainly stay away from anytime into the future.

The main theme, performed in Title Card, is an orchestral effort that whilst short, is quite satisfying. It's fun, full of life, and doesn't necessarily rely on them damned synthesizers Bromfman loves! The only problem with the theme, is the fact that it only gets one shining moment in the entire score, which for me, is a big problem! It's a terrific theme, and probably the best few lines of music in the entire score, so the fact that it gets 50 seconds to shine is quite an issue! We do have various other themes that pop up, within Mattox and Reporters, Code Red and If I Had A Pulse, but these are fairly repetitive, and unlike the main theme, have much too many spotlights. This is a balancing issue that should've certainly been noticed by Bromfman and his producers somewhere along the line; the best piece of orchestral work here is a short piece, which will certainly garner more attention and notice than any of the other themes, yet the more linear, boring themes are constantly reused, to give the feeling that Bromfman is starting to lose his inspiration. It's a cock up, anyway you look at it.

The orchestral effort, to add to the horror that is the synthesized components, is quite abysmal. Again, everything is so incredibly repetitive; Bromfman has to continually replicate every new riff and rhythm he creates, as to make up for running out of ideas. Bromfman occasionally uses his set of brass instruments to create something heroic and vibrant, but these are too far between. For the most part, Bromfman has infused a heavy dose of edgy rock within the score, using electric and bass guitars, and a classic drum set. It's not good, I assure you that! Vallon's Warehouse, the 15th piece on the card, is full of this irritating rock music, which isn't catchy or fun in the slightest.

The score will occasionally slow down and allow itself breathing room, as seen in the piece If I Had A Pulse. The action riffs ceased for a small while, and Bromfman allowed time for real development in the score as a whole, and it was a pleasant change. Doesn't last very long, of course! Various pieces also instill some quieter, but intense rhythms and beats that don't totally rely on synthesizers. They're Going To Kill Him is one of those pieces, that begins with a quiet but fast paced rhythm, which was a pleasant departure from the repetitive, slow, heavy synthesized music. Of course, the same rhythm made a repeat showing in the next piece, Rooftop, as has happened numerous times within the score! Based on what we received in If I Had A Pulse, I would've like to have seen more quiet music; character driven melodies.


Conclusion:
Bromfman's Robocop is a boring endeavor, which constantly repeats itself and doesn't have many shining moments. Various riffs will surprise and delight, yet these are few and far between. It's best to stay away from this disaster; both film and score.