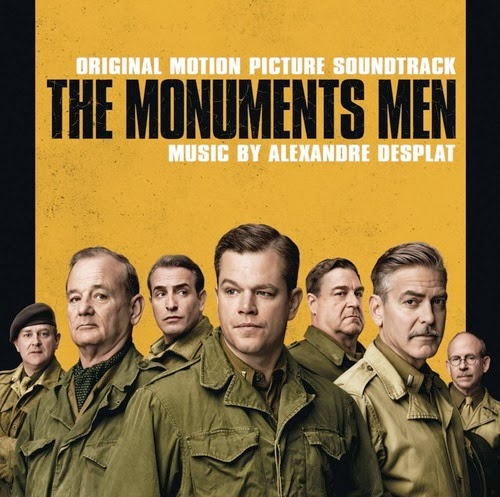 Films with huge, star-studded casts have a very up and down history; so many fall down in the wake of things. The Monuments Men is a film directed by George Clooney, starring himself, among other big names in Hollywood, such as Matt Damon and Bill Murray. It's sure to garner some big press with those names on the bill, although the film has opening to mixed reviews. The Monuments Men is an historical drama, and for the scoring of the film, Clooney recruited Alexandre Desplat, of Skyfall, Harry Potter and Argo, a man who has a taste for classical music. Based on his filmography, I'd say it was a fantastic decision to recruit Desplat; the man is a very capable composer, and really delivers when necessary. Despite the little hiccup that was Philomena, a score which didn't impress me, I still reserve hope for the composer here. Let's see if that hope was in good stem!

The Monuments Men is a score that reminds me of Williams in his prime; ripping it up with huge scores that have that bombastic, bold quality that I see in most of his music. The Monuments Men is just that, and a little more! Desplat has infused his usual classical vibe here, that we often see in his other scores. For a film like Argo, I never saw that as working wholeheartedly, whilst here, it works perfectly for the film's World War II setting. I also see a lot of inspiration drawn from Harry Gregson-William's fantastic score for Chicken Run. It has that cheeky feeling to it, for a vast majority of the play time. It's quite enjoyable to listen to!

This is really easy music to sit down and listen to, unlike so many of the scores that are released nowadays, which require your full, undivided attention until the end. The Monuments Men doesn't require any effort; it's just a very simple listening experience. I didn't feel it an effort to go and listen to, as it was so much damn fun! Writing a review on it is even easier! This is one of Desplat's best work, simply because it isn't a grind to get to the other side. Argo was a very well composed score, no doubt about it, yet I found it hard to sit through to the final piece, without pausing the music and leaving it for a while, before returning. I want to find time, on the other hand, to listen to The Monuments Men more often, because it's just so irresistible!

Like so much of Desplat's work, this score is brilliantly composed, as is one of his traits. Every piece is filled to the brim with well placed brass, piano and strings, that all mesh together very well. When the entire orchestra comes out to play, Desplat makes it worthwhile, and it's incredibly satisfying. He enjoys a slow, but steady pace; we see an abundance of emotional, slow pieces, highlighted by some incredible piano solos. My favourite piece on the card, Heilbronn Mine is a slow, but very affecting piano-based piece, which I enjoyed immensely. Nothing is delivered in half measures here; all the themes and material is expanded upon, even within the seemingly short 1 hour long running time. You'd think an hour would be long enough for me, but not in this case! I'd love to hear another hour of the fantastic piano solos! When it comes to the brass, trumpets most notably, Desplat really shines. The brass section sounds so bold and distinct here, and some of the riffs they deliver sound almost as if they've been plucked out of a 60's war score. Desplat has really managed to instill the nostalgia! Desplat as always, has delivered on the composition of the score; it's very well written, and very well performed.