Check it out... if Brian Tyler's score simply didn't serve up enough complex, thematically appropriate material for your taste, and you want to find some thoroughly involved pirate music.

Skip it... if Deriviere's effort for Remember Me didn't impress you in the slightest, despite it's complex ingenuity, or the lack of memorable themes presented here doesn't have you excited. 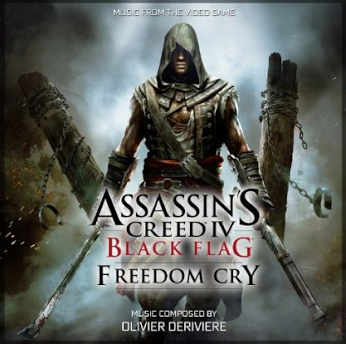 "Whilst beautifully composed and intelligent from beginning to end, the lack of memorable themes does effect what could have been a brilliant score."

When an impressive composer like Olivier Deriviere is gifted the opportunity to deliver the score to one of the more anticipated video game expansions of the year, people gather round and listen. After Deriviere's blockbuster breakout for Remember Me last year, he has had eyes all over him, expecting big things for his future. And more often than not, your next big scoring opportunity after the big breakout is not something that is expanding upon work done by business giant Brian Tyler, who is currently garnering the attention of some of the biggest motion picture companies in the entire world; companies like Marvel, Disney, Paramount and New Line Cinema. His work for 2013's outstanding game Assassin's Creed IV: Black Flag, the sixth installment in the heavily acclaimed Assassin's Creed franchise, received high honors from myself, and various other reviewing sites, though negative rulings came through every now and again, most notably James Southall's review, which ruled a 2 and a half stars out of 5, a disappointing total for a score I believed so much better. Nonetheless, this year Ubisoft has released an expansion to the latest game in the series, entitled Freedom Cry, and so therefore this requires it's own set of music. For that job, Ubisoft enlisted the help of Olivier Deriviere, fresh of the success of last year's Remember Me, which had him nominated and even winning various awards from review sites all over the web. His experimentative yet assured style no doubt had the producers at Ubisoft enthusiastic for his work, but what about us, the listener? Does Deriviere's work stack up to his work for Remember Me, or Brian Tyler's work for the original game? Let us find out!

Whilst Brian Tyler's effort was a piece of bombast fun that worked to build my love for the composer, Deriviere takes a drastically different turn, one that may turn off some listeners, and enchant others. Discarding the glorious and obvious thematic material Tyler worked upon throughout Black Flag, Deriviere has explored more elegant and thought provoking music that proves to be arguably the most impressive pirate score that we've ever heard. But impressiveness does not necessarily equate to enjoyableness, as I found out with last year's The Desolation of Smaug, which was a technically astounding album release that lacked the emotional impact of the prior installments into the franchise. Deriviere's music, as I mentioned, is utterly impressive, no doubt about it, though for me at least, it doesn't have the emotional power, or bombast grandeur that made Black Flag so damn enjoyable. Black Flag was out there, and used recognizable themes that could be enjoyed in all their obvious glory, and whilst many found that a drawback, I saw it as a great addition to an otherwise unimpressive score. Black Flag dragged for far too long, that is undeniable, but fortunately, Tyler's impressive and bountiful themes made for a fun listening experience, one that I come back to often. I can't see myself coming back to this installment, as whilst it's technical bravado is valiant, it's just not memorable enough. It's in most ways the exact opposite of Remember Me, funnily enough; whilst Remember Me was anything but contemporary, and utterly memorable, Freedom Cry sticks to the orchestral flare that is to be expected of pirate scores, yet fails at creating something that will be remembered even a year on from now. It's not bad, make no mistake. It's just not that good either.

Thematically, the average listener will be struggling. I myself am finding it hard to distinguish any themes from the strong written material. Based on other's interpretations though, many believe the main theme to be a Haitian song, introduced in our opening piece The Root. And that's another issue I happen to find within this score; the use of the seemingly Haitian-inspired songs. The album dedicates near 18 minutes of time towards Haitian songs, and whilst effective within a cue alongside Deriviere's work, as is the case with the opening theme, it gets old quickly, and most will turn off the album after the instrumental work has completed. It's not necessarily bad music; it just doesn't work within the context of such an album as this. Haitian music seems the wrong direction for such a game as Black Flag, as it sounds almost tribal African. The pirate realm is dominated by Caribbean influences and locations, and whilst the Haitian influence is accurate in theory, it's execution is questionable to say the least. I never felt like I was listening to pirate-influenced songs, sung in the Colonial Era. Whilst the rest of the material is quite damn impressive, it's this Haitian influence that bugged me throughout, and required addressing.

Despite my gripes, I can't deny the beauty and variety that this score provides that Tyler's work lacked. Deriviere is a genius when it comes to writing an effective score, and whether or not you find his themes obvious, you should be able to appreciate his constant brilliance. Whether it's a blindingly well executed string passage, a Caribbean-styled percussion highlight, or just plain inventive and exciting action riffs, Deriviere excels in finding the most ingenious ways of exploring the pirate world in musical form. Tyler's score worked masterfully for thrilling sea action and simply can't be surpassed in that retrospect, but Deriviere's flowing and tense action cues still shine on their own merits. The choir, whom perform the irritating songs at the end of the album, actually deliver some quality work within the score, furthering the engrossing aspect of everything provided. The music as a whole is less bombast glory that we now expect from our pirate scores, and more a relaxing yet tense endeavour, which takes standard action cues and builds upon the lesser explored elements. In sum, if you're sick of Hans Zimmer's approach to the genre, then Freedom Cry should certainly have you yearning for more. It's less obvious in the way it approaches themes, and whilst that constantly infuriates me, I can understand why it's an appealing trait for someone else. If Tyler's score didn't click for you, this may very well work over any disappointment felt for that effort. But for me specifically, this was an impressively composed, beautifully executed, and masterfully arranged on album release that didn't harbor the accessibility or fun that I believe a pirate score should have. It shouldn't be the norm, that all pirate scores have to have thematic material which your average listener can simply whistle along to, but in the context of what Deriviere has given us for Freedom Cry, I wanted more convenience with this main theme, and all subsequent themes. Disappointing, yet brilliant nonetheless. You can purchase Freedom Cry on iTunes here.