Check it out... if you yearn for a James Newton Howard release which boasts the orchestral grandeur and textural complexity that such projects as Lady In The Water managed to achieve.

Skip it... if you'd much rather hear the synthetic droning that we were exposed to within Catching Fire, that doesn't harbour near as much creative ingenuity as this here project. 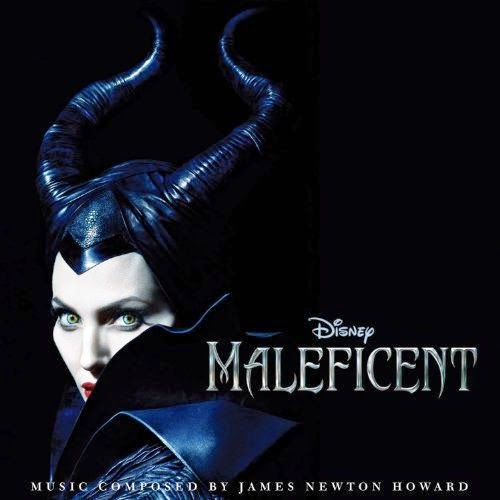 "This is arguably James Newton Howard's best work since Lady in the Water and The Dark Knight; high compliments indeed."

Along with reboots, a retelling of a classic story with some sort of drastic twist has become a sort of trend of the 2000's. Frozen did it last year, with the sister saving the female protagonist, instead of the true love saving the female protagonist, and this year, we're getting a look into the Sleeping Beauty villainess, Maleficent, and getting asked the question, "Was she all that bad?" That's right people; another film where the villain appears to be misunderstood! Haven't seen that before, have we! Nonetheless, with Angelina Jolie helming the title role, the film will undoubtedly reign in big figures at the box office, despite any issues that first time director Robert Stromberg will encounter throughout production. For the scoring of the film, Stromberg has recruited industry giant James Newton Howard, common collaborator of M. Night Shamalamadingdong. Apart from his collaborations with Shyamalan, Howard's scoring career seems to have taken a downwards turn fairly recently, providing less than fantastic scores for the past 10 or so years. Fortunately though, Howard's latest project has him teaming up with Disney once again, providing the score for yet another retelling of a classic tale, the previous film being his work for 2012's abysmal Snow White retelling, Snow White and the Huntsman. This time, Maleficent is the project he's set to compose for, and with choirs at the ready, pencil on paper, and a vast orchestra set to go, Howard gifts us one of the stand out scores of the year, so far.

Maleficent is arguably Howard's best work since Lady in the Water and The Dark Knight; yes, that is exactly how I'll start off this review. Whilst there are glimpses of subtlety when utterly required, Howard, for the most part, allows this score to stand at the forefront and dazzle without restraint, which for what has been provided is a very good thing. His composition for the film is without fault, with glorious battle cues, sensational thematic concepts, and some beautiful instrumentation being stand out traits within this sensational score. Those whom claim the old fashioned orchestral score is going out of fashion should take a look into this release and re-evaluate their stance on this region of the industry, for Howard's intricacy is unparalleled, even by composing giants of these days like James Horner, Howard Shore, and somewhat lesser known Abel Korzeniowski. It's as if Howard took the often impressive action cues from After Earth, combined that with the grace and subtlety of The Last Airbender, and finally embraced the compositional finesse that was found within Lady in the Water. Put all of that together, and you having something like Maleficent; something that should impress all of score listeners. Whether it's down to the scope of the music, or the instrumentation, Maleficent has something for everyone.

The one cue I thoroughly need to examine and mention is the first cue on the card, and very much the best, Maleficent Suite. It sounds as if it's been constructed solely for album use, and it provides us a rundown of the themes in play throughout the score, from Maleficent's array of thematic material, as well as some astounding female choir phrases, some of the most outstanding brass work of the year as of so far, and some surprisingly touching piano motifs towards the end. Is it the most outstanding cue of the year? Quite possibly, I will admit. It's the most ambitious and memorable, that's for sure; and in such a year when My Enemy is also on the shortlist for best cue, awarding the most memorable title to any other cue is quite an achievement. And whilst this piece could've simply been an array of themes thrown together in a non-coherent mess, Howard collates them so as to fit together in an understandable and logical sequence. Every theme presented is hum worthy and awe inspiring; nothing to fault in the thematical sense, which is something that I've found Howard often achieves. Even his messy releases quite commonly provide decent or above average thematical ideas that have been executed quite well, at least in my experience; Maleficent is above and beyond anything else Howard has done in a thematical sense.

Other cues worthy of mention include the gorgeous Maleficent Flies, which showcases one of the delightful vocal themes, performed by an insanely good female choir; Battle of the Moors, which showcases some of the more intense and powerful written material; Maleficent Is Captured, a nearly 8 minute long orchestral extravaganza, which rivals the already mentioned Maleficent Suite in sheer brilliance; and finally The Queen of Faerieland, which is a sweet send off to the orchestral score portion, and leads into Lana Del Rey's Once Upon A Dream. The vast quantity of the pieces presented on album are without fault, with exceptions made to most of the love cues, or those representing the apparently shoehorned Prince Phillip, which doesn't really suit a lot of the tone of the score. In fact, the cue Prince Phillip follows one of the strongest action pieces on the card, The Christening, a 5 and a half minute long piece of orchestral gold, and we are left reeling off a brilliant cue with something far less so, a piece which holds no adventure, action, intrigue or emotion. The rest of the love cues are completely unmemorable, which is a stark contrast to most of the material provided here, which is for the most part, as I said, faultless.

Whether or not you're a fan of Howard's previous work, this album should bode with anyone and everyone. This is undoubtedly Howard's best work since The Last Airbender, and is a juggernaut of a score that poses little issues. You know, I was really looking forward to awarding Desplat the trinity of awards this year; Best Score, Best Composer, and Best Cue, but it seems the man has had Best Cue stolen off him by Howard. Maleficent Suite is above and beyond anything else I've heard this year, and many more replays are soon to come. Whilst faults can be found, and the contrast between various cues are a little extreme, Maleficent is a beautiful album that should be held to great esteem within the Disney scoring canon. James Newton Howard may have disappointed some with Snow White and the Huntsman, but no one should be disappointed with this colossal, beautiful, and moving triumph of a release. You can purchase Maleficent on Amazon here.