Check it out... If nostalgic throwbacks are always a delight for you, and good composition, and incredibly satisfying and powerful thematic material matter, in your mind.

Skip it... If you've never been a fan of Alexandre Desplat, or don't enjoy his heavy use of bass in particular, as it's on show quite often here. 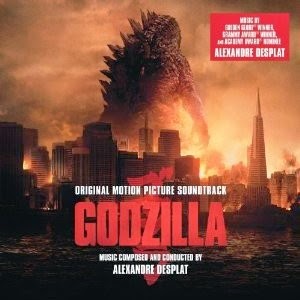 "This is a terrifying, beautiful and emotional throwback score, that has me once again acclaiming Desplat's ingenuity!"

The reboot seems to be in high commodity nowadays, with production studios often opting for the nostalgic effect to have audiences packing to seats, to see old characters reborn. And whilst it is often a total failure, both in critical and commercial realms, some do peak the suspicions of the film world. 2014's Godzilla happens to be the latest to fit into that category; helmed by a seemingly capable director in Gareth Edwards, and fitted with an equally capable cast, including Bryan Cranston and Aaron Taylor Johnson, Godzilla looks to reinvigorate audiences' taste for the giant kaiju. After 1998's travesty, directed by Roland Emmerich, many were turned off on seeing an Americanized version of the classic Japanese film. Fortunately, though, Legendary Pictures persisted with gaining the rights to the character, and in 2010, Legendary announced that a Godzilla film was to be made, and released in 2012. At first Guillermo del Toro was rumoured to be directing, but after his denial of the rumour, the spotlight was shifted onto British film director Gareth Edwards, the director who had recently, at the time, released his first feature film, entitled Monsters. After that rumour was confirmed, though, news from the reboot was quickly stilted; Legendary kept most of the production shut off from the prying eyes and ears of those on the internet for a good while. At the end of last year though, we got our first look at the film, in a teaser trailer that sent every film fanatic crazy for days on end! And now, here we are, less than 10 days away from the premiere, and the internet is abuzz with news, information... score releases. Among all the hype, few look forward to the score; though, as a score fan, I have been following this production intensely. When Desplat's name was released as the composer in August of last year, many were in utter denial, with few hailing this as a competent decision. Though, after the release of his brilliant and fun score for George Clooney's The Monuments Men, many have changed their opinion on the man, including myself. I'd never been a fan of Desplat's, that was until that score found it's way into my ears, and from there, I've loved the man. He has his fair share of disappointing scores, but that's not to degrade his compositional skills, which are high class. Nonetheless, with my taste for Desplat in the positive range, even after the disaster that was The Grand Budapest Hotel, I was excited for what could be provided for us in Godzilla. And what did Desplat turn in at the end of it all? Well, a damn near perfect score, that's what.

Boasting a gorgeous orchestral performance, weaved in with heavy, but quite effective bass, Alexandre Desplat's Godzilla is one of the best scores of the year, so far. It's everything that I expected, and just a little more. It combines the modern tone that we received from the first trailer, with utterly nostalgic brass riffs, interesting solo moments, as well as the introduction of lesser known instruments, such as a most noticeable bamboo flute, and the Japanese taiko drum, which I felt was a great way to call back to Godzilla's heritage. Desplat realises his vision for Godzilla, and fully embraces it; destruction and peril, at it's most stylistic and 1980's-like. We've known how good a composer Desplat can be from his scores Argo, Harry Potter and the Deathly Hallows Parts 1 and 2, and more recently The Monuments Men, but I don't think we've seen him this inventive and constantly experimentative. His sound production skills have seemed to increase ten fold between his prior scores and this one, as well as his compositional skills; thematically, this is maybe even superior to The Monuments Men, a score which I hailed overtly, and even hinted at a possible nomination for Best Score; it was really that good! But Godzilla trumps even that effort, for it's scope, it's vision, the fact that's it's such an absolutely fun listening experience, whilst staying intense, engrossing, and intoxicating. It's only been out for 3 days, and I've already listened to the score twice, and feel like I've barely scratched the surface on what really is within; there's so much to discover, and it continually calls me back. There's just so much to love here, for everyone! Whether you're into your Hans Zimmer like me, or you very much enjoy your older monster scores, or your older scores in general; you should enjoy this!

What makes Godzilla unique in such a day and age for scores as this, is that whilst it's tempted often to retreat in the easily accessible doom score genre, it never does, and retains thematic integrity throughout. By doom score, I mean the kind of score that harnesses such a tone that spells utter loss of hope, that doesn't instill near enough emotional force to really impact upon the listener. Inception's horn of doom began the doom score trend, and soon enough, composers were adapting that concept of incredibly deep and forceful brass, bass and synth, into entire pieces. Whilst I didn't mind the horn of doom, I didn't think such pieces were exactly inspired, original, or at all even bearable. Before long, though, many composers were taking the doom pieces, and adapting them into entire scores of work, and so became the norm for apocalyptic styled scores. Fortunately, every now and again, we get a score that fits into this genre that breaks out of that containment, and instead vies for something a little more respectable, and that would have to be Godzilla, in this case. Riddled with ingenious ideas, and a wild, ambitious direction, this is as fun a score as it gets. The atmosphere is all at once, from the first piece, unforgiving, brash, and a beast that steamrolls it's way through the piece. The monster's theme, heard first in Godzilla!, is one of immediate presence, and it takes no time for you to realise who Desplat is attempting to represent. It's a glorious theme, one of Desplat's finest. Riddled throughout the opening pieces, and other Godzilla-centric cues is also the electronica tone, which is most obviously establishing the human element; Godzilla seems the reckoning carnage that can't be stopped in musical form, whilst we humans and our technology seem like buzzing bees; it sounds as if the synthetic material is desperately trying to repel the bombastic side of the score, yet it fails on almost all accounts, as was the intent of Desplat, no doubt. Still though, the human element does break through every now and again, making way for slow, emotional moments, which break up the intense and fast paced speed of the rest of the score. The opening to Back to Janjira is just that; a slow, beautiful piano solo that takes my breath away every time I listen to it. This combination of both slow and emotional, and bombast glory makes for one hell of a listening experience!

I'm not one to often thoroughly insist on purchase of an album, but if there is one thing you are going to buy this year, make it be this one! Godzilla is a rare spectacle, one that I was worried would not lead up to my expectations, but ultimately surpassed them greatly. It does not overstay it's welcome, with it's only hour long running time, though now I wish for more; I'm desperately hoping for a complete score sometime into the future. This is currently front runner for score of the year, and Desplat is now front runner for composer of the year. Enjoy this piece of gold my friends, because I fear you won't be receiving much quality monster genre music into the future, based on the direction we're heading. This is pure, unadulterated brilliance. You can purchase Godzilla on Amazon here.