Check it out... if a combination of Hans Zimmer's terrible Black Hawk Down, Johan Skugge and Jukka Rintamaki's atrocious Battlefield 3, and Henry Jackman's piss poor Captain America: The Winter Soldier sounds like a promising premise!

Skip it... if droning, simplistic, repetitive, and uninspired "music" sounds like something you'd rather avoid. 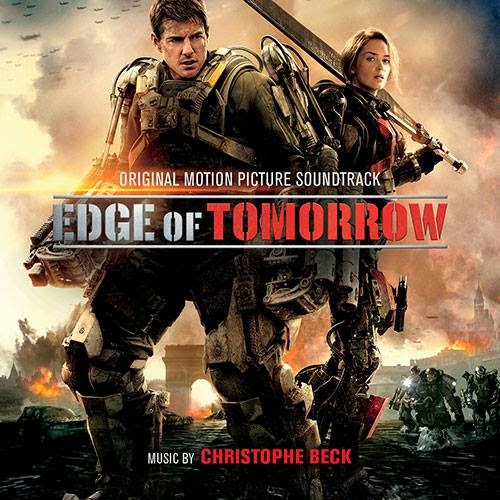 "It's as if Hans Zimmer's Black Hawk Down got mixed with Henry Jackman's Captain America; that sounds like an absolutely horrid combination!"

After a 4 year hiatus, director Doug Liman has returned to deliver us one of the better time travel related films of the past 10 years, though calling Edge of Tomorrow a time travel film is a bit of a stretch. It's more like Groundhog Day with aliens! Thanks to outstanding an screenplay, brilliant performances from both stars of the film, Tom Cruise and Emily Blunt, and some pitch perfect direction, Edge of Tomorrow has received an astounding amount of critical acclaim. The score on the other hand... not so much. With Christophe Beck helming the musical aspect of the film, expectations were minimal as it was. Frozen was an effective score that worked well within the film, that really didn't have too much replay value, and Percy Jackson and the Lightning Thief was a predictable yet enjoyable score nonetheless. Still, nothing overly impressive. So when his name appeared for this project, which had undoubted potential, many questioned the decision. His experiments into the action genre had never been particularly impressive, and for the majority of his career, he's been centred around comedies or children's flicks, some encompassing both those descriptions. Does Beck have what it takes to provide an enjoyable, memorable, and above all else, exciting action score? Well, lets find out.

As a fan of Hans Zimmer, I feel I have the responsibility in stating that I blame him for this atrocity. The bar for action scores now requires that composers provide synthetic, repetitive scores, with a great quantity of atmospheric sound effects; all thanks to Hans Zimmer. These qualities all plague Edge of Tomorrow with a vengeance. Ultimately, though, what really ruins the score for me, and for anyone in general, is the lack of originality. I feel like I've heard this score a number of times before, even after the single listen! It's as if Hans Zimmer's Black Hawk Down got mixed with Henry Jackman's Captain America: The Winter Soldier; that sounds like an absolutely horrid combination! To add to these comparisons, the use of synthetic effects are completely overused. This entire score feels as if it was made on a computer; the complete lack of actual, proper orchestral instrumentation is quite remarkable, and near unparalleled in all the scores I've listened to in my time. Beck at least has taken time to infuse strands of percussion into the score, but even this feels synthetic. Rushed, non-energetic, and hastily inserted, it doesn't really add any life to the score. Whereas an album like Man of Steel managed to bounce the energetic percussion off the synthetic portions well and naturally, Beck's attempts all sound forced. His composition is so damn poor, it's a wonder he's even been credited with composer! Beck sat down to write an action score, and ended up with a lackluster, boring, unimpressive and heartless piece.

The thematic material-can I call it that?-is completely devoid of any subtlety or foreshadowing, to add to the mess that is the entirety of the score itself. Maybe Beck can somewhat make up for our suffering through this vomit-inducing turd by providing a theme, or set of themes, that prove that he is more than just another Zimmer wannabe, when it comes to action music? Well, no; apparently, that is beyond his skills as well. Themes here are either so blatant it's ridiculous, or completely hidden within the mush of this disaster of a score. I'm surprised the Horn of Doom wasn't featured as a theme. Actually, hold that thought... I believe it was! Google defines a theme as, "an idea that recurs in or pervades a work of art of literature." The key word here is recurs. The Horn of Doom is perhaps the only memorable aspect of this score, though that isn't necessarily for the greater good; the "technique" is used so often that it could be called the primary theme. A smart, intriguing, and involving Tom Cruise character's theme is... the Horn of Doom? Because subtlety is for weaklings! Random volume spikes are underrated and help add to a score! Proper, exciting action music is far too overused; we need more droning, uneventful music, which harbors the exact same tempo and combination of riffs and phrases throughout every cue on this piece of crap! Is there anything remotely emotional or character driven here? One cue alone, entitled Again, slouches away somewhat hesitatingly from the brawny, idiotic synthetic material that Beck seems so fond of, yet the action can't be stilted there. Beck insists upon adding synthetic and electronic material to the humorous or light-hearted music, so as to not allow us any time to breath. Let us hope this is not the case with the score's use within the film; if the score is any indication, emotional content shall be spared for Liman's film.

If there is one thing to be happy about, let it be the running time. At only 45 minutes long, you shan't be stuck with this score for too long. It's surprising, considering the film lasts nearly 2 hours. So, good job Beck, for allowing the score to go on for as little time as possible. He has that much restraint, I guess. All in all, I can't imagine anyone liking this. This is the opposite case to Under The Skin, another score which I hated to a point where it was almost so bad it was good; I can somewhat understand why someone would enjoy that score. Edge of Tomorrow, on the other hand, is just plainly generic crap. It's nothing new, it's nothing impressive, it's nothing that requires a second listen. Without the comedic touch, Christophe Beck seems to look a fool. He's obviously out of his comfort zone, but even so, recycling the Horn of Doom until the listener's ears are bleeding, and working around that effortless sound effect to provide a score and a grounding is just damn lazy. Edge of Tomorrow has it's small shining moments. It has it's unique moments. But these are all condensed into a 45 minute long album which provides mindless synthetic "music" for the majority of the running time. If you want to hear enjoyable mindless action music, look towards The Dark Knight Rises. Even so, you don't need to give this score any second glances. You can purchase Edge of Tomorrow on Amazon here.