Guardians of the Galaxy Score Review

Check it out... if you're willing to receive a score which takes a great quantity of inspiration and lead from Brian Tyler's Marvel scores, and whilst providing a great deal of fun, does little to establish Bates as a truly capable composer

Skip it... if the customary Bates composition and electronics are far too harsh or unnerving to make for good listening experience in your mind or ears 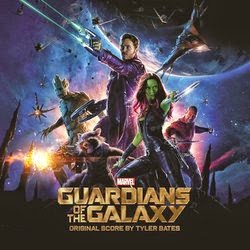 "In regards to Bates' discography, this is an effective and fun score, though it's heavily flawed for something coming out of Marvel."

Looking back a year ago, I'm sure I could've approached any of my friends and posed them the question, "Do you have any clue what the Guardians of the Galaxy are?" and I would've gotten a confused face. None of my friends, even those who had been reading comics fairly often, had any damn clue what these Guardians of the Galaxy could possibly be, and they would've answered my question accordingly. Flash-forward to today and you'll find that a good majority of the teenagers you could find in any given day would be able to give you a description of the new smash Marvel hit, Guardians of the Galaxy, without blinking an eye. Directed by James Gunn, the film follows 5 men and women who are tasked with saving the entire galaxy. Yes, it's rather self-explanatory. Already, Guardians has become a smash hit, breaking August box office records during it's release last week and accumulating a total of $94 million in domestic gross over the weekend. Though, not only has it found itself with a great quantity of commercial success; Gunn's film has managed to gather serious critical acclamation, with the great majority of Rotten Tomatoes' reviewers certifying Guardians as a fantastic film, providing it with a 92% approval rating at the time editing. All in all, as far as Marvel films go in the realms of critical and commercial success, Guardians is currently reigning supreme in comparison to all the other Marvel: Phase 2 films, those being Captain America 2, Iron Man 3, Thor 2, and now Guardians of the Galaxy.

At the present time, though, Tyler Bates' score to the film is receiving far less acclaim, from both casual listeners, to reviewers and to collectors everywhere. If Bates' name doesn't ring a bell, allow me to reintroduce you; Bates is not only one of Zack Snyder's most frequent collaborators, but he is also a rather poor composer whose line of work has included some of the most embarrassingly unoriginal and plagiarized music of the modern era. Bates' most easily recognisable piece of work, 300, is not only a poorly structured and often ear-piercing score, but also strangely reminiscent of Elliot Goldenthal's Titus score. Far too reminiscent... to the point of which it's actually considered plagiarism. That's right, friends; Bates literally copied and pasted entire themes and motifs from Elliot Goldenthal's Titus and placed them into his own 300 score, passing those same themes and motifs off as his own. And I use the term "placed" in a very literal sense; Bates made, quite often, no changes to entire themes that Elliot Goldenthal had composed himself, before slotting them right where he and director Zack Snyder saw fit. To no one's surprise, this has earned Bates a reputation within the scoring community that has seen him consistently frowned upon by fellow composers, as well as reviewers and collectors alike. Bates has done little to have our opinion of him changed after he released 300, with the scores The Day the Earth Stood Still, Watchmen and Conan the Barbarian following that disaster; all scores which received less than satisfactory responses from those who took time to analyse and review them. So with the announcement of such a composer as Bates for a project like Guardians of the Galaxy, which had the potential to shine on a musical level with it's combination of 80's and 2000's influences, many were rightly infuriated; the man who shamelessly plagiarized great portions of Elliot Goldenthal's work had been gifted the opportunity to score a film which many are considering one of 2014's most anticipated releases? Do Marvel have no shame?

Well apparently that is the case, for despite every cry of despair, Marvel refused to budge on their decision. And so here we arrive at the release date (or roundabouts) for the score, and Bates' name is labeled proudly at the forefront, almost mocking every one of us who still spit at his shoes as he defends his decisions to steal work made by others. Though in this case, fortunately, it appears as if Bates has not actually plagiarized a great deal of another composer's work, and in fact actually composed something this time around. Congratulations Bates; you're moving in a positive direction! It would also appear that Guardians happens to be Bates' most enjoyable score since... well, ever, really. In terms of improvement from the disgustingly handled Conan the Barbarian score, released in 2011, this is a huge step for our composer. Ambiance is not nearly as prominent here as it was in Conan (though still quite irritatingly noticeable), and it at least feels as if Bates is trying to reflect the space setting that the film occupies throughout the majority of it's running time. Cues like The Collector really do allow you to feel the vast expanse of space, which is a credit to Bates. Though is Guardians the masterpiece that I so desperately wished for? Most certainly not! Those who more often than not take issue with Bates' lack of originality will find much to ridicule here, as Bates virtually tries to replicate (depending on the situation) the splendor that Brian Tyler managed to instill in his Thor: The Dark World outing, or the fun and bombast theatrics that Tyler incorporated for Iron Man 3. In both circumstances, Bates looks like the amateur, as his music is neither more enjoyable than Iron Man 3, nor more glorious or over the top than Thor 2. In terms of a Marvel: Phase 2 score, Guardians is certainly not the worst, as that crown is undoubtedly going to swing towards Captain America: The Winter Soldier; unfortunately, though, it simply can't match the impeccable standards set by the master of pompous fun, that being Brian Tyler.

Don't discount the amount of fun you quite possibly will have with Guardians though, as there are periods of truly glorious music. The final few cues, from Guardians United, are filled with fast paced, exciting action music, as well as some well executed slower, more emotional moments. The Groot material, representing one of the 5 characters in the Guardians group, in general is often astounding; a word I'd never thought I'd hear myself say in regards to a piece of music composed by the likes of Bates. Groot Spores and Groot Cocoon are both outstanding pieces of music, which provides both more impressive orchestral instrumentation and composition than any of Bates' previous work, as well as a more fluid combination of both artificial material and organic music. To add to this, the choral efforts are some of the finest that Bates has ever provided, adding to the stunning and heavenly quality of these Groot-specific cues. You can find more of this sensational vocal material in some of the more emotional cues, such as To The Stars, which sports some rather beautiful (another word which I'd never consider using in regards to a Bates piece of work) instrumentation, including a fantastic array of piano work. Later in the score is the mesmerising Sacrifice, which must serve as some sort of a death theme; though do not fear for spoilers, for I can not confirm nor deny that, as I haven't seen the film as of yet. The cue finds moments of both uplifting heights, as well as emotional, saddening lows, and so what is achieved is a emotional build up to a triumphant climax that feels utterly satisfying.

As well as the emotionally climatic cues that really pay off, Bates rewards us with some stunning action pieces, providing us with some incredibly fast and energetic music that doesn't relent until the final beat. The Kyln Escape stands as the crowning cue in regards to action music, presented as the longest piece on the entire album (weighing in at 7:23 minutes long), and it delivers some of the most smile-inducing material of the score. Whilst most certainly not as memorable as any of the action material that Tyler provided for both of the Marvel films he undertook, Bates' action music hurls enough energy and variety to have you tapping your foot along in time with the beat. Unfortunately though, I haven't truly addressed the negatives that Guardians holds within, and they are numerous. First and foremost; why are there 5 cues which clock in at under a minute each? The score for The Fault In Our Stars set a precedent for cues which clock in at an unacceptable length, though this comes far too close to that score's record for comfort. How much quality material can you insert in a 50 second cue? Well, based on the cues in which this seems to occur, not a whole lot. Most of these cues are filled to the brim with ambiance or just cut out too quickly to actually deliver any impact whatsoever, so they contribute little to the entire product. It's an immediate, irritating flaw that I can't move past.

Other flaws include that of being far too much lackluster and downright atrociously mixed electronics, as well as the previously mentioned lack of originality. See the cue The Destroyer for examples in regards to both of these issues. Both of these problems plague the often-criticised Remote Control albums, and it's where most will draw big comparisons towards; the electronic element almost begs you to find similarities between this and other recent Remote Control scores like Divergent and The Amazing Spider-Man 2. The problem, though, is that both of those scores were relatively enjoyable to listen to (The Amazing Spider-Man 2 in particular), whilst Guardians can often be a drag. It has it's select moments of sheer beauty, passion and brilliance, which are all instilled in those highlights which I mentioned previously, but these are shrouded in and amongst a lot of misty electronics and some downright confusing themes. In regards to the thematic material, which I haven't mentioned nearly as much as I normally would or probably should, I will account that towards not seeing the film; there is much that simply doesn't make sense to me on a thematic level, having not seen the visual medium. What thematic material is clear, though, is mostly poor. The villains music is all dissonant and electronically-based, but in the worst way. Look towards the cue Ronan's Theme to see this kind of horrid description in force. All of this leads to a lot of really difficult listening, and being that the pay-offs in some of the bigger and more impressive cues aren't all that spectacular, never does Guardians feel fully rewarding or satisfying. Ultimately, Bates' work is quite possibly his best since... well, his best ever, really. But in terms of emotional satisfaction that can be found within the album, Guardians is lacking, though it isn't completely absent. If you're interested in hearing a composer try to tackle the Brian Tyler style, but with unease, than this may very well be for you. Guardians of the Galaxy is available on iTunes and Amazon here and here.