Check it out... if you wish to delve into a thoroughly enjoyable, well composed, perfectly orchestrated album, full of rich material that holds a great deal of classic old orchestral grandeur about it

Skip it... if you'd much rather an album of brooding, subtle music, as Hidden Kingdoms is rather upfront in regards to it's boldness and energy 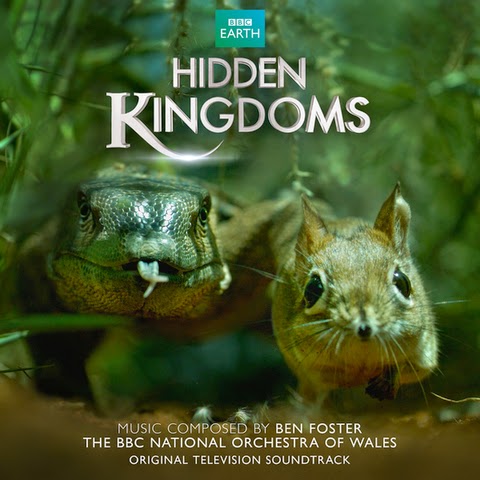 "There have been few scores released this year that have been as colourful and exciting as Foster's Hidden Kingdoms!"

BBC Earth's 2014 mini-series, Hidden Kingdoms, was a 3-part series that was released earlier in the year. It documents a number of various animals, all small in size, and how they perceive the rest of the world in it's largeness. Unlike many a nature documentation series, which all attempt to capture the most believably realistic and true-to-form footage possible, Hidden Kingdoms embraces the idea of story-telling using pre-destined stages and various visual effects. Many critics and audience members have seen this as a step backwards in nature documentation, and this has led to the mixed consensus regarding the series. Though whilst it's controversial in regards to the use of human-designed sets and scenes, many an audience member have found that this contributes to a greater sense of narrative, as well as a more cinematic feel to the overall project. It has also been somewhat criticised for it's overly dramatic tendencies, which many would consider out of place for a nature documentary. Though I would argue that nature can often be a very hectic and dramatic thing, you may take it how you will. Nevertheless, most audience members will be lured in by Stephen Fry's contributions to the series, though it will be the visual component of the television show that either keeps the viewer in their seat, or has them flipping the channel away.

Whilst the visual identity certainly lends itself to the show's more dramatic propensity's, some of this could be accredited to-no, should be accredited to-the orchestral score for the show, provided by Ben Foster, most commonly associated with orchestration of the latest Dr Who and Torchwood scores. Here, though, the conductor steps away from the podium and seats himself in a position to of which he can compose this time around. His score for Hidden Kingdoms has received quite a large quantity of praise, and for good reason; this is a bustling, vibrant score, full of colourful and exceptional instrumentation, not so often seen in modern composition. Whilst I must admit that I do rather love electronic-based scores, such as last year's Oblivion, and even the recent John Debney television score, Houdini (which I will undoubtedly review in good time), it's great to see something which is orchestrally based and full of ideas and energy. Foster's imagination runs free all throughout the running time of this sensational 79 minute long album, and in the 48 tracks available, Foster manages to evoke a number of keen and effective emotions, always representing the onscreen action with a great deal of vigorous vitality that I struggle in comparing to any other 2014 score, in both film, game and television mediums. How To Train Your Dragon 2's fluid and powerful action cues certainly provided a great deal of enthusiasm, though it never reached the level that it does here. Desplat's Godzilla was a grand orchestral powerhouse of a score, though it's solemn mood is no match for some of the varied and invigorate instrumentation that lies within Hidden Kingdoms, all of which is fun to listen to. This is just a delightful, innocent little score!

In regards to the thematic identity of the album, many of the leitmotifs don't feel central to any given animal, but more so the locations of the stories that occur all throughout the series. The series covers 6 different stories throughout it's nearly 3 hour total run time, and so therefore 6 different locations had to be covered within the musical component of the project. The first portion of the score covers the African-based portion of the story, filled with varied wooden percussion; most prominently the bongo, as well as some fantastic flute. For a flute player, I'd like to congratulate Foster for actually giving the flute some serious run time, as I know firsthand how difficult it is for my instrument to be heard above and about the rest of an orchestra or band. Here, though, the flute is given some outstanding moments to shine, all contributing to a cheeky and delightful first section. Arriving after the ecstatic cue "Life", which seems to have been used to break up these two portions of the score, is the Sonoran Desert-based material, which utilizes the electric guitar, as well as some old Western-styled violin runs. A reprise of the theme from "Life" occurs as the next thematic idea of the score runs into gear, that being the North American portion. This section is far more diverse whilst also being geared further towards classical orchestral instrumentation than the previous two locations. We see fast-paced brass and percussion, all quicker and wittier than before. The use of the marimba is a lovely addition to the percussive identity of this location, as are the darker and more sinister string runs placed throughout. The cue "A Burglar" is a particular stand-out here, with it's classic spy-like sound about; it's an intelligent and funny cue, based on it's placement and subject matter. This is quite possibly the darkest and most enthralling section of the score, often utilising deeper and more mournful brass than what has been and what will be seen in due time.

We are then transported to the Borneo component of the score, which is far lighter than the North American portion, again utilising the flute to full effect, alongside some other light instrumentation. The cues "Life In The Trees" and "The Forest" serve as the highlight for this section of the album, with their delightful, fun jungle-like music. Darker tones are heard throughout various cues, including "Three Little Pigs" and "Forest Giants", which continue the use of the light woodwinds, though throw in some slow and somewhat scary string runs, as well as deep brass. This portion as a whole is filled with some of the more diverse and varied music of the score, with a definitive instrumental identity not so clearly seen throughout. This isn't a negative per-se; the lack of consistency in regards to a singular instrumental idea lends itself to a number of fantastic musical concepts being explored, all exhilarating and beautifully executed. The Brazil section of the score seems to throw itself at our feet with the exciting and absolutely delightful "The Streets of Rio" and from the gorgeous trumpets to the quick and snappy flutes, there is energy bustling throughout! Metal percussion rings throughout the section, especially in the cue "Ant Colony", and this leaves an old Goldsmith-like sound to be heard, which is most certainly not a bad thing. The final location to be explored is Tokyo, and so we get some wonderful marimba, as well as some ethnic flutes, male chorus chants, and some... electric guitar? "Beetle Roll" is a cue which combines a western sound, including this aforementioned electric guitar, with a Japanese soundscape, and it makes for a fantastic near-two minutes of entertainment. The rest of the section is filled with some more modern electronics, though they never overwhelm the obviously-orchestral heart of the score, and blend in well with the tone of the Tokyo identity. These electronics can be assessed most prominently in "Bright Lights", a cue filled with more excessive dramatic music, though this excessive quality doesn't prove to ail the cue in any way possible; it's still a stunningly well executed piece, with instrumentation that ranges from all over the orchestra, as well the already mentioned use of electronics. The rest of the Tokyo section is filled with some blissful music, most of which tugs at the heart.

Perhaps looking into each individual section of the score was a little excessive in my review of the album as a whole, though I saw it necessary in this case. There's so much variation over the scope of the 79 minutes that Foster has provided on album, that to cover it all I believe going in depth is so very necessary. Also, it's a whole heap of fun to analyse this score in it's entirety, so why wouldn't I? Hidden Kingdoms is a mish-mash of quality orchestral composition at it's finest, and released in a year of which I can say that about so many scores (How To Train Your Dragon 2, Godzilla, Maleficent, just to name a few), it's quite an achievement. Foster has undertaken bold instrumental choices for each section of the story, and has smartly provided musical identities for each location, so you can get an idea for where the story is headed just by the music. Any score which manages to establish a location and premise inside your head primarily thanks to the varied and calculated instrumentation on offer deserves praise for that at the least, though combine this thematic intelligence with the grandeur and enthusiasm that all the performers seem to harbour for what they're playing, as well as some downright catchy writing, and you have one of the most absolutely gorgeous and fun scores of the year. Foster is rarely a composer, and does not often get to receive great acclamation for his work. Here, though, Foster should certainly step out into the spotlight, for this is a brilliant work of art that I shall surely come back to often into the future. You can purchase Hidden Kingdoms on Amazon or Silva Screen Records, here and here.