Check it out... if an aggressive electronic approach, filled with ear-piercing bass pulses is the kind of score which you're interested and excited for

Skip it... if a lack of thematic construct and genuinely enjoyable music leaves you desiring more than John Debney and co-composer Sebastian Arocha can provide 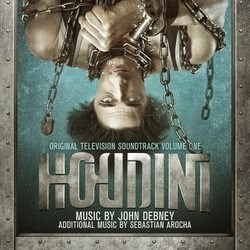 "Houdini's most prominent positive is also it's downfall; it's brutal and unforgiving electronic instrumentation may be Debney and Arocha's undoing in this context."

Houdini is a History Channel mini-series, premiering September 1st (funnily enough, the date this review is being written), and stars Adrian Brody as the famed escape artist and illusionist, Harry Houdini. The series, as billed by History Channel, "delves deep behind the curtain into Houdini's life through his stunts, his visions, and his mastery of illusions." All in all, it seems an intriguing piece of entertainment that I'm certainly willing to check out in the near future. This is primarily down to the fact that Brody's name is listed as one of the key credits, as I've been a fan of his for quite some time; though I may need to hold out viewing, as critics and audience members alike are currently in deliberation and debate, as mixed reviews come flying in through the door left, right and centre. Currently, the series seems to be weighing on the positive side, though based on some of the more extreme examples of various critic and audience member's reactions, this is surely going to dip towards the opposite side of the spectrum. One component of the series that has received a wide array of acclaim from critics, though, happens to be John Debney and Sebastian Arocha's score, split into two volumes, released simultaneously. Debney is currently in what seems a lull, certainly in regards to this year after the excruciatingly boring Draft Day, released on April 1st. Houdini seems an opportunity for him to amp up the stakes, apply some varied instrumentation, and deliver some excitement. Arocha, relative newcomer to the spotlight, has composed little solo work during his career, instead primarily collaborating with other composers, including Mychael Danna and the aforementioned John Debney, who he has returned to score alongside for Houdini. An unknown collaborating with a composer whose year has been, in essence, quite abysmal. This is sure to be fun.

Houdini is somewhat a fun listening experience, in an excruciating, ear-numbing kind of way. It's partially entertaining when the often used electronics assault your ears with questionable fast-paced rhythms and phrases. This is most certainly not the boring, uninspired Debney that we've seen recently, but a man hell-bent on providing something so wickedly unique and 'original' that it all turns into a huge, incomprehensible mess at various points throughout the 1 hour and 1 minute running time. There were periods at which I was reminded of the intolerable mess that was Trent Raznor and Atticus Ross' The Social Network, a score which many would consider a fine example of how not to execute a score based heavily around pulsing electronics. When any said album begins to remind me of a score which reduced me to emptying my stomach in a bucket, I believe a problem is arising. And whilst Houdini starts with an energetic flair, with pace and power riddling the entirety of the opening cue "Houdini Flash Forward", it starts to fizzle down to more disappointing levels as the album trudges on, as the electronics become less insistent on providing logical and enthralling phrases, and simply serve as your basic ambiance, filling in the background and pulsing inside your ear. Anyone irritated by the low bass pulses explored within any given Alexandre Desplat score will undoubtedly find great fault with near all the electronics and use of bass here (and even some of the violin and cello use), as it's constantly fluctuating in volume to unprecedented levels, pulsing with low tones and insistent pace that do nothing but harm the ears.

Whilst the first little portion of the score, from cues "Houdini Flash Forward" to "Travelling Shows" demonstrate the capacity for how well Debney and Arocha can use electronics if they're attempting something exciting or bold, the saddening reality hits in the cues "Father Gets Fired" and "Proposal/Wedding Night", as the electronics begin to throttle the lighter moments and push their own weight upon them all. It's hard to find a moment of fleeting orchestral instrumentation, without a heavy ambiance layering over the top, projecting a synthetic feel to the music. Authentic instrumentation, in it's rarity, also seems to be the far better executed component in Houdini; the late 1800's heavy violin, cello and broken piano sound that we became accustomed to thanks to the likes of Zimmer (namely his score for 2009's Sherlock Holmes) is explored here in all it's stereotypical flamboyancy and vigour, and when Debney commits to the idea, he generally delivers some reasonably entertaining and fun results, as demonstrated within the cue "Hitting The Road". His use of metallic percussion is also another trope which is consistently used in scores that support visual mediums representing this late 1800 time period. Again, it's a well utilised style that exacts some fantastic results, though it's ultimately underused when compared to the amount of electronics in play here. Whether it be entirely virtual sounds, or the bass pulses mentioned previously, Houdini is riddled with absolutely hideous synthetic material, all disgustingly conceived. As much as I was desiring something far less conventional from Debney, especially after Draft Day, his attempts to produce something 'out-there' render results which leave me scratching my head, whilst desperately seeking out headache medication. What compels a composer to completely disregard restraint to this nauseating extent? A desperate stylistic decision? The director's own desires? Whatever the case may be, it doesn't make an at all enjoyable listening experience on album.

The assortment of poorly written synthetic material is large and wide, spread throughout near the entirety of the score, though there are flashes of genuine intelligence and energy. As I've mentioned a few times already, the first few cues on the card do hold promise for what is to come, with a great deal of enthusiasm displayed throughout their running times. As the score trudges on, the electronics become more and more lumbered, delivering poorly constructed riff after poorly constructed riff, all of which do no good for your ear drums as they thump away with little-to-no hesitance whatsoever. There are brief periods of relief, where Debney constructs a proper phrase, and attempts to provide musical coherency instead of aimless thumping; unfortunately, even these cues are often unbearable, and require you to reduce your volume substantially so that your ear drums don't burst instantaneously from the unnecessary forcefulness of the 'music' in question. "Bullet Catch For The Kaiser" is a cue which I not only resent, but also strangely enjoy. It's prominent electronics aren't overtly painful, though to describe them as pleasant is far off the mark. At least Debney has provided a rhythm here; moving in a positive direction, one cue at a time, it seems.

I haven't even delved into the lack of a prominent thematic construct, which many will be hard-pressed to find and latch onto. Through my various listens, a number of motifs are certainly noticeable between cues; "Bullet Catch For The Kaiser" and "Carriage To The World/Falling Back To Earth" seem to share a common electronic rhythm-pulse, though with slightly different instrumentation. Leitmotifs are hard to come upon, though they are certainly existent throughout the score, with reprises of these leitmotifs often consisting of slight-to-great variation, including the aforementioned slight variance between instrumentation, a change in pace, or a difference in which octave the theme is being performed in. This will obviously leave many dissatisfied, yearning for some consistent thematic material that ranges all throughout the score, and in all honesty, I'd have to add my voice to that chorus of anger; is it so hard to properly reprise a significant prior theme in all it's glory? Whatever the case, it's an issue that I hope Debney and Arocha address within the second volume of this series. Speaking of the composers, what exactly did Arocha contribute in regards to this project? All the listings I've seen for this score, whether it be on Amazon or Soundtrack.NET, I haven't found Arocha's name in high prominence. I'd like to be able to distinguish as to what was composed by whom, though I fear I'll never get that opportunity. Nevertheless, one could say that Houdini: Volume 1 is more of a disappointment than Debney's Draft Day was; at least that turned out a relatively pleasant listen however unoriginal or uninspired. Houdini's aggressive electronics here constitute for a poor listening experience that most audience members will undoubtedly rebuke for poor construction, limited thematic ideas and a disgusting album presentation. If the electronics could be toned down in the next installment, perhaps I could award Debney some much needed acclaim; unfortunately, Houdini: Volume 1 is another disappointment from this often capable composer. You can purchase Houdini: Volume 1 on Amazon or iTunes, here and here.