Check it out... if you're a fan of Paul Haslinger and his love of synthetic instrumentation, for his fans may be the only people capable of treasuring such a score as this

Skip it... if you're tired of cliched and unoriginal crime-thriller scoring, a genre riddled with consistently generic music, with No Good Deed proving to fit comfortably into this description 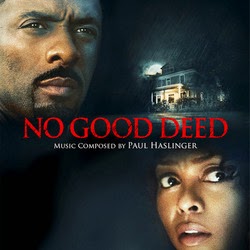 "If I could describe No Good Deed in a single word, it would be 'indifferent'"

Released to critical dismissal from reviewers near universally, director Sam Miller's third theatrical feature, No Good Deed, stars Idris Elba and Taraji Henson. The film centres around Elba's character, Colin, a criminal who escapes from his confines whilst he is travelling back to prison after being denied parole. Colin finds himself at a young woman's abode, sweet talking her, before certain events suddenly expose the truth about the murderer and his evil ways. The overall consensus from critics and audiences alike seems to be that this is an overtly derivative, poorly executed thriller, full of characters with little substance and personality; so from that summary, I'd very much suggest skipping over this title, despite it's relatively big name stars. One could consider the potential for another collaboration between Elba and Miller a recipe for success, especially after their collective well-received efforts on the BBC crime drama Luther, of which Miller directed many an episode. Unfortunately for fans of Elba and Miller, this potential seems to have been squandered, though not necessarily due to their own doing, but more so due to the efforts of screenwriter Aimee Lagos who penned the film. Her predictable and cliched storyline didn't lend itself to any positive feedback from reviewers, those of whom are tired of old and repetitious material, and reasonably so; the crime-thriller genre has of late been riddled by unoriginal mess. In regards to the music of this aforementioned genre, there has always been a mixed attitude from the scoring community. Crime-thriller scores seem to have a reputation for splitting our relatively small group of individuals in half; for example, the score to 1991's The Silence of the Lambs, composed by industry giant Howard Shore, is commonly considered a mixed bag. Filled with unnerving instrumentation and compositions (an intention of Shore's that worked undeniably well within the visual context he was writing for), one could consider Silence a thoroughly ambitious and well executed score, composed for particular purposes that were met. Nevertheless, a portion of the audience could and has displayed intolerance for it's often simplistic structures, something that commonly plagues scores composed within this genre.

For No Good Deed, composer Paul Haslinger was recruited, and his results within the context of the film are unknown in my experience, due to not having the film released in my country or in my local area as-of yet. Unfortunately, a vast majority of film critics conducting their analysis of the picture have consistently missed it's mention throughout their reviews (which irritates me to no end; when will film reviewers begin to properly credit composers for their work, especially for a film belonging to a genre whose very nature requires creepy and tension-building musical cues?), leaving me with very little knowledge of the effectiveness of the score in it's intended context. Fortunately, as is blatantly obvious by the fact that I'm here discussing he score today, the promotional score album was released earlier this month, allowing me an opportunity to take a listen. Haslinger's desire for the score was to mix classic film noir elements alongside music/sound design effects, to create a tension-ridden and often foreign soundscape; something unknown and threatening for the audience. Haslinger commonly incorporates sound effects into his more contemporary works, often mixing acoustic guitars with heavy synthesizer-use, so this description he has given off for No Good Deed doesn't sound too dissimilar to some of his prior works. This design approach was even used for one of his more recent and popular works (though this score was composed under his band's name, Tangerine Dream), Grand Theft Auto V. Though in that context, restraint was conserved throughout, and it led to a surprisingly satisfying and enjoyable listen. No Good Deed, on the other hand, seems to be a consistently unfettered score, filled with some of the most annoying and dreadfully unoriginal uses of electronic instrumentation I've heard in a good while. Much of the 26 minute long score is particularly unrelenting in it's unabashed presentation, with Haslinger unafraid to simply pump the audiences' ears with outrageously disjointed and uninspired music. If I could describe No Good Deed in a single word, it would be 'indifferent'.

Instrumentally, there is very little to comment on, apart from a rather generic palette of stringed instruments, the basic Haslinger acoustic guitar/sound effects meld and bass drums galore. Timpanis are also quite apparently used throughout the duration, often to decent effect. In regards to these instrumental choices, the score doesn't stray too far away from conventional and generic crime-thriller territory, exploiting little but the basics of this genre. The first cue, 'On This Day', is even rather enjoyable in it's execution, however simplistic in it's structuring. An atmospheric mood is quickly established, formed using slight ambiance and strings over the top of deep and rumbling timpanis, rolling away in earnest. The main phrase of the cue, a 3 note string and percussion motif, presents itself in basic form, slightly restrained though ever enjoyable; it's a fantastic scene-setter of a piece. It's from here though that the score begins to trudge in a downwards direction, with the synthetics being let loose to abuse the rest of the live orchestration. Everything in regards to the electronic component of the score becomes outrageously excessive in it's use, from synthetic percussion to strange and unnecessary sound effects, all of which add only discomfort for the listener. The motifs and melodies undertaken in the majority of the score are relatively simplistic and unintelligent; repetition is a common element of the composition. Though as I've made mention, it's the instrumentation which breaks the score into an unconvincing and particularly excruciating listen, one that will leave you feeling irritated and pained.

As the score continues, we are led into the second cue, 'The Parole Hearing', which opens with a relatively light tone, replaced shortly after with a dangerous and cautious atmosphere, due to the use of the less-restrained ambiance use alongside heavy cellos. It is here where certain listeners should be able to garner resemblances to other scores within not only this genre, but other various categories of film. The cape-fluttering sound effect technique, used effectively in Zimmer's Dark Knight trilogy, is exploited for it's use first within the aforementioned second cue, and then utilised time and time again afterwards. The comparisons to Zimmer's Batman trilogy seem to be unparalleled in regards to my own experience with this score, though other listeners should be able to draw their own separate comparisons; nevertheless, I'd say it's undoubtable that Haslinger's 'inspiration' formed from other, far more accomplished scores, does not just take the shape of smaller, less fundamental components of the score, but more so some of the largest thematic and structural components of the work; many a cue's main motif seems to have been derived from another composer's work. The third cue, 'The Accident' is even more comparable to Zimmer's work for The Dark Knight, thanks to Haslinger's use of strings and timpani, accompanied by building ambiance undeniably similar to the former's work. Other examples of this comparison can be found within the cues 'It Is All A Game', 'Why Are You Doing This?' (which is, funnily enough, what I was subconsciously asking Haslinger during my various listens) and 'Fight For Life'. All the cliches that accompanied Zimmer's Batman scores are here in numerous quantity, from dramatic string ostinatos to 2 beat timpani riffs, all the way to consistent synthetic uses, though Haslinger's incorporation of the artificial instrumentation is dreadfully poor in comparison. No enjoyment can be extracted in any form from No Good Deed, part the first cue's somewhat intense setting of the scene, which works reasonably well. After this cue has concluded, though, one should be prepared for some utterly abysmal atmospheric drivel.

Haslinger's implementation of various modern instrumental and thematic cliches is not limited solely to Zimmer's Dark Knight trilogy, but also to a great variety of Zimmer and associates' trademarks; for example, the Horn of Doom appears briefly but noticeably during "It Is All A Game", one of the most irritating cues on the album. The previously mentioned ostinatos appear constantly, threatening climatic satisfaction; instead, we're simply teased with insistent building and repetition which never seems to pay off in the long run. John Paesano made faults in this regard for his most recent release, The Maze Runner, though to a lesser extent, and that was released but a week ago. If you've read my review of this aforementioned score, it should be clear to you of the extent of my intolerance when it comes to unsatisfactory 'climaxes' in the music. No Good Deed truly tests my patience when it comes to this component of scoring. Haslinger's reluctance to properly deliver a fluent melody in it's own right is completely limited by, what seems like, a limited creative direction. There is nothing to suggest a story or a reasoning for the 'twists and turns' the score takes; it's just simply repetitive phrases played over and over again by the same instrumentation, all of it simply disgusting to the ears. The synthetics and bass pulses are absolutely brutal in some portions, leaving the listener with little option but to turn the volume down. The recent Houdini and The Knick scores, composed by John Debney and Cliff Martinez respectively, both exhibited some astoundingly poor uses of bass pulses and synthetic use, though again, to a far lesser degree in contrast to No Good Deed. A great deal of restraint concerning these instrumental decisions could have gone a long way in producing a score which was far more frightening, as was the intention, than painful.

Strangely, I've never felt this blatantly angry about a score released this year since Under the Skin, though I feel slightly hesitant to say that Levi's work was utterly without merit, considering I've now, since writing my review of the score, seen the music work in context. However, whilst Under the Skin may have worked wonders in the visual medium it was composed for, I can predict little good will come of doing the same for No Good Deed. This is a poorly constructed, unoriginal and disgustingly hideous score; one that I will surely never get around to listening to again. I'd almost consider giving Haslinger credit for minimizing the punishment one would have to endure to sit through this monstrosity of an album, as the total running time of the score sits at a short 26 minutes. Unfortunately, that's 22 minutes too long; the score is saved from being a complete and utter waste of time by the opening cue, 'On This Day', and the closing piece, 'Terry's New Beginning' (the main female character's name is actually, funnily enough, spelt 'Terri'). Both cues seem to follow relatively generic structures and pacing, though they manage to evoke some sort of noticeable and easily defined emotion, something the rest of the score can't seem to execute; the former piece initiating fear and danger, the latter evoking calm and peace. The rest of the album is garbage, plain and simple. Perhaps if you're a fan of Haslinger's prior work in this genre and those in close proximity to such, than this is worth a look; though for those who've not yet been introduced to the work of this otherwise talented man, I'd suggest looking at anything but this; his collaborative work is far more enjoyable than this unoriginal and conceptually faulted twaddle. You can purchase No Good Deed on iTunes here.