Check it out... if you have an unreasonable desire to be assaulted by some of the most obnoxious and disgustingly arranged television compositions of the past year

Skip it... if the promise of more grueling electronics, uninspired instrumentation and composition, as well as a lack of any memorable material isn't a great pitch for an improvement over the prior score in the series 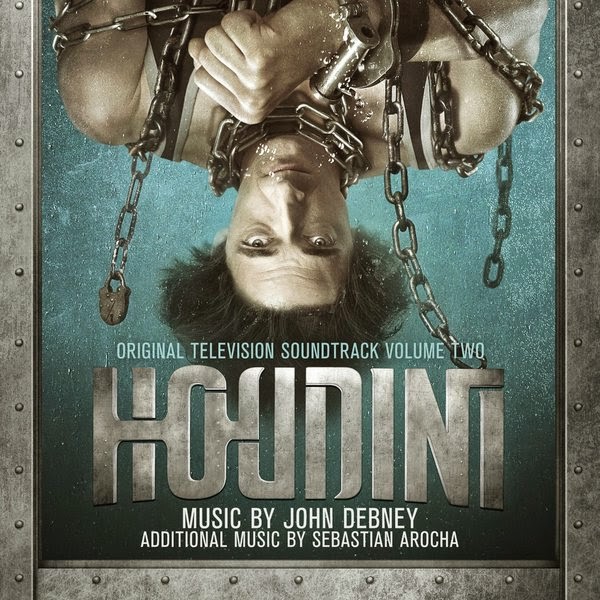 "The same composer who gave us Lair and Passion of the Christ has delivered Houdini: Volume's 1 and 2; it's almost sad to think about it this way."

The first episode in History Channel's Houdini miniseries accumulated a total of 3.7 million viewers, proving to be the biggest cable miniseries opening of the year so far. This is still a far cry from the highest opening of previous years in regards to miniseries', as 2012's Hatfields and McCoys produced an outrageously large 13.9 million viewers opening night, and last year's Bonnie and Clyde (whose score was also composed by John Debney), which produced a total of 9.8 million viewers on it's opening. Nevertheless, this should be considered an achievement by History, considering the critical and community consensus for the series is still currently mixed. The IMDb score has reduced significantly since before the first episode aired, and critics of various establishments and websites, including the Los Angeles Times and Variety, have awarded the show negative reviews. This isn't to say the series is universally panned, though; there are certainly those who have stated that they enjoyed the television series, applauding Adrien Brody's performance primarily, though giving credit to the rest of the ensemble, as well as the convincing depth that the screenplay achieves in regards to the titular character. All in all, it's been a fairly poor reaction for a project which seemed to sport a great amount of potential leading into it's release. The second disappointment in this debacle has been the score to the miniseries, provided by John Debney and Sebastian Arocha (though Arocha's contributions seem quite minimal). As I made quite clear in my review of the previous volume in this series, Debney and Arocha's efforts did not sate my desire for something respectable, enjoyable and variable from Debney; a man whose output has been relatively poor in the previous year or so. Houdini: Volume 1's poor use of electronics and lack of strong motifs or beats made for one of the more intolerable television scores of the year to date. Can Volume 2 in the series prove a far better listening experience? Can this finally redeem Debney in the eyes of score collectors everywhere?

Unfortunately, the answer to that question would be a resounding and universal 'no'. Not enough has been improved from the previous installment for this to be considered even remotely impressive; in fact, in some cases, Debney has taken steps back in his composition of this here title. "How can one take steps back after the atrocity that was Volume 1?" I hear you all asking me, denying the notion. It's quite simple, and Debney has proved as such, thanks to his undeniably poor instrumentation which seems to lean more heavily on distorted bass and electric guitar than ever before, as well as that same ole' great big lack of memorable or even comprehensible phrases or motifs. Add to this a great deal of ambiance, an onslaught of heavy and clunky bass pulses, and a predictable array of material, and you have one of the more disappointingly underwhelming television scores of the year so far. Houdini: Volume 2 is a mess of a listening experience, something that has been a common property of both these scores, and provides little to no satisfaction, from beginning to end. There are, again, certainly flashes of momentary brilliance, where Debney seems to realise that a good and strong electronic rhythm would actually play out reasonably well in a certain instance. For example, the first cue "Houdini Night 2 Main Title/Houdini Recap" promotes an energy and power that is scarcely heard throughout the rest of the remaining album, and certainly shines as a high point. Cue 16 "Canon Ball Introduction/Canon Ball Survival" is also another one of these cues, in which Debney's capabilities as an electronic composer truly shine through as competent and impressive, and allow you a glimpse at his full potential. If only he had the audacity to apply this to the rest of the running time; perhaps we would've encountered a result worth credit. Unfortunately, Houdini: Volume 2 is just an overexposure to mindless and painful electronic dabblings.

Despite the continued overuse of electronics, not all is dealt with to a poor standard. Again, the orchestral instrumentation, whilst limited in it's use, is still exceptional and one of the few favorable components of the score. The metallic percussion is found more commonly in the first half of the album, though it's use fizzles as a contemporary drum kit moves in to take it's place for the second half of the score; though unfortunately, the kit feels completely undermined by the brutal and unnecessary volume the synthetics sport all throughout. The entertaining string and piano portions, in retrospect, seem reduced in quantity in comparison to the previous installment in this series, though they still serve as one of the high points, instrumentally, of the score. These strings and piano arrive in a small amount of cues, including "Harry Strays" and "Moms Death/Mothers Funeral" to my great amusement and delight, breaking up the unsympathetic electronic pulsing to deliver some genuinely intelligent composition (intelligent in this context, in which pretty much a basic 4 note ostinato could be considered an intellectually advanced phrase). "Harry Strays" seems to be a cue of actual emotional dexterity, which appears to be an unheard-of concept in this series, as Volume 1's emotional complexity and depth could be compared to the amount of enjoyment I deducted from my explorations of Mica Levi's Under the Skin; absolutely non-existent. Whilst the cue starts as an electronically-based piece of music, it begins to unravel as more-so a piece of varied string and piano instrumentation; it displays heart and exploration, something missing from the majority of this album.

This same thing occurs during the surprisingly beautiful "Bess Goodbye/No Escape", a cue whose first half poses a great deal of resoundingly touching piano work. Of course, the cue almost entirely blunders when the second portion of the title kicks in; this being the No Escape segment. The electronics amp up, and it almost undermines the careful precision undertaken to actually produce something of depth and direction. It feels as if the first half of the cue is actually contributing to something within the story, on a deeper level than "Houdini is being awesome and doing illusions... and stuff." That's about as much as I could decipher in regards to the series' plot line throughout both albums, up until the few moments where Houdini seems genuinely heartbroken or affected. The title of the cue, undoubtedly a spoiler for the series, doesn't even seem required to tell a story about the main protagonist. It seems subtly but effectively clear that he is currently experiencing an emotional tribulation, and Debney's usual direct style dissolves into something more reminiscent of an emotional cue from, say, Marco Beltrami's recent The Giver. I feel somewhat hesitant to compare this atrocity in any shape, way or form to the infinitely better The Giver, which managed to prove Beltrami's capabilities in subtle and emotional composition. Though exclusively for this one small patch of music, I feel it is necessary. This stretch of music is impressive. This stretch of music is an incredibly component display of Debney's true capabilities.

Though it's consistently disappointing to think of "Bess Goodbye/No Escape" as the extent of Debney's capabilities in regards to his material on offer here. It's a strong piece of music, though it's not truly a remarkable, complex composition that enthralls. It's just simply a powerful cue, made more prestigious than it is worth only by the fact that it is surrounded by worthless electronic drivel. And I mean literally surrounded, as the cues that sit prior-to and after this are all full of poorly rendered bass distortion and pulses that don't add anything except soulless beats and numerous headaches; either this or shallow string and piano cues, overpowered with nonsensical ambiance that detracts from any of the emotion Debney attempts to infuse within the music. It's all painful and non-satisfactory. This is the case with near-the entirety of the second half of the album, as strange sound effects litter the ambiance-filled background, and coherency, comprehensibility, and general intelligence is thrown out the window. It's all quite shallow, to say the least. "Lady Doyle Is A Fraud" is a perfect example of such intolerable nonsense, as the distorted electronics, basic pacing and predictable direction renders a result which proves to be anticlimactic and irritating. The first half isn't that much greater, though, with it's own fair share of substandard compositions. From "Tub Full Of Ice" to "Doyle's Backstage Visit", both cues with an unnecessary quantity of synthetics, the bad outweighs the good by spades consistently, and wholly or primarily positive pieces of music are rare.

To add to the irritating lack of growth since the first score, Debney's thematic ideas and reprisals are about as extensive as one could imagine after the first volumes' lack of memorable or particularly pleasing leitmotifs. Various short and unmemorable components from the opening cue, "Houdini Night 2 Main Title/Houdini Recap" are repeated throughout the rest of the score, though often with underwhelming results. A reprisal of one of the main phrases from the opening cue is heard in "Master of Illusion", though it required me multiple listens to be able to decipher such a connection, seeing as how underplayed it seems to have been used. The "Houdini Suite" reprises a number of motifs from the score, though again it underwhelms and no immediate connection between specific cues can be drawn. A casual listener will undoubtedly miss the thematic material entirely, fearing Houdini hasn't been represented by a singular leitmotif throughout the entire duration. And perhaps Houdini, in actual fact, hasn't. Debney's ideas for the character seem to be so aimlessly scattered in different directions that it makes identifying the main character within the musical sense almost entirely impossible. The protagonist is always just another phrase, muddled in amongst the rest of the unoriginal and disgustingly poor material, and for a miniseries following such an inspiring, interesting and conflicted character as Houdini, this is most certainly a big no-no. So, in conclusion, Houdini, both Volume's 1 and 2, are some of the more intolerable television music albums produced in the previous few years. With such a composer as Debney, responsible for gorgeous pieces of work like Lair and Passion of the Christ, it's most certainly a disappointing result. It's an instrumentally lackluster and single-minded arrangement of music, unlistenable quickly after it begins. If I was to suggest either of these over the other, the first volume would win my hand, for being slightly more varied than it's subsequent installment. Nevertheless, both scores should occupy little to none of your time, for I fear for any given listeners safety; as a reviewer, I feel I have the responsibility of warning you against initiating a listening experience which will undoubtedly produce headaches and other irritations. Buyer beware. You can purchase Houdini: Volume 2 on Amazon or iTunes, here and here.