Check it out... if you're willing to indulge in a 72 minute album of action onslaught, which never holds up until the final note.

Skip it... if you're not interested in listening to a far less glorious attempt at recreating the magic that was Thor: The Dark World, for Tyler just falls short of predictable but brilliant fun in this installment into his discography. 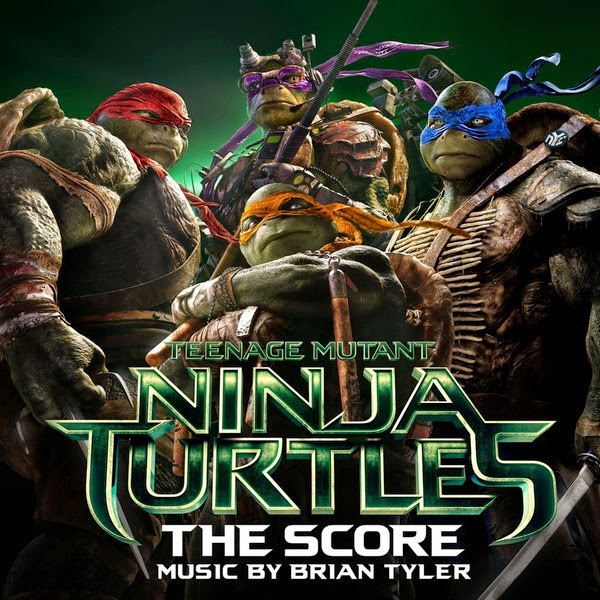 "This score is ridiculously simple and somewhat unoriginal, though isn't that exactly why we come to Tyler in the first place? "

Apart from those who will forever crave more installments in regards to the Transformers films, many were outraged that director Michael Bay would even be touching the Teenage Mutant Ninja Turtles franchise; a franchise which has made up parts of many an 80's or 90's born person's life. Messing with something from someone's childhood, and what makes it so fundamentally memorable will generally bring about a great deal of rage from the film-loving community. So whilst Michael Bay isn't necessarily directing the newest iteration into the Teenage Mutant Ninja Turtles cinematic canon, the fact that his name is on the poster is enough to set some fans to anger. But it appears that wasn't enough for Nickelodeon Movies, the production studio in charge of the project; they wanted to thoroughly crush every single hope and aspiration that any Teenage Mutant Ninja Turtles fan had leading into this reboot for the series. Having Michael Bay have any say in the production or story element of the film is enough to enrage many, but Nickelodeon Movies went so far as to recruit the director of the universally hated Wrath of the Titans, Jonathon Liebesman, and have him sit in the directors chair and take control of this all. The audacity! Do they have no shame? Nonetheless, Teenage Mutant Ninja Turtles premiered recently to lukewarm reception, with critics and audiences alike denoting it as a poorly constructed, mindless action film.

The same could be somewhat said for the score, composed by Brian Tyler, a man who has recently had quite a lot of success; his scores for Marvel juggernauts Iron Man 3 and Thor: The Dark World, whilst predictable and unintricate, were particularly crowd pleasing and enjoyable to listen to on repeat (which I have done many a time). Add to that his sensational score for Assassin's Creed IV last year, and you can see that the man is currently on a roll of delivering fantastic action score after fantastic action score. Tyler fans were pleased to hear announcements for a number of different projects for 2014, all of which have pretty much been released this week; Tyler has a knack for releasing individual scores quite close to each other in any given year. His first score for the year of 2014 is this; Teenage Mutant Ninja Turtles, which seems to lend itself immediately to Tyler's often cliched but effective style. And that appears to be exactly the case with Teenage Mutant Ninja Turtles in it's final form: this is a fun score, though it is clearly flawed with simplicity and a lack of originality. From the theme to a great portion of the action music (which is numerous), much of this score feels like rehash from a better product; cite Thor: The Dark World for example. Certainly in regards to the main theme, Thor: The Dark World proves a far better listening experience, due to it's greater array of material, and the higher quantity of organic instrumentation.

Though it should not be mistaken that I'm discounting the amount of addictive fun that I had throughout Teenage Mutant Ninja Turtles; listeners should be warned that the mistakes and missteps made here are quite numerous. First and foremost, the amount of ambient electronics are inexcusable. Take for example the cue Adolescent Genetically Altered Shinobi Terrapins, which attempts to create an emotional and touching portion of music in the latter half of the cue with some solo piano. The biggest issue with this "emotional and touching" solo piano is that it's completely drowned out by the infuriatingly loud and prominent electronic ambiance, whose presence is most certainly not required. This little habit of inserting ambiance into emotional moments was noticeable in Hans Zimmer's The Amazing Spider-Man 2, though Tyler takes it to a new level here, and it's both unbearable and unacceptable. This is a most confusing issue, an issue which I certainly didn't think would come into play in regards to a Brian Tyler score; Tyler is more often than not a very organic composer, fond of live instrumentation over electronics. And whilst live instrumentation is certainly far more prominent than any quantity of electronics in play here, the amount of time that electronics are actually in play is far more than any other recent Tyler composition. This is a somewhat disappointing fact for someone who appreciates Tyler's use (or lack) of artificial instrumentation.

The most common issue taken with any given Tyler work can be used as an argument against this score in tail, as well; the fact that this is quite a simplistic, brass-based effort, consisting of a minimal quantity of themes. As someone who hasn't seen the film, I can't classify too many of the themes in play as specific character leitmotifs or general leitmotifs for good or bad sides of the equations, though I will do my best; the main Turtles theme can be found in the self-titled Teenage Mutant Ninja Turtles cue, and it's your basic 4 note Tyler theme, though it's execution is rather splendid. I'm certainly going to be revisiting this theme far more than the theme from Thor: The Dark World, which I already believe is a fantastic piece of composition, despite it's simplicity. The villain theme can be found most prominently used in the cues Shredder, Teenage Mutant Ninja Turtles and Adolescent Genetically Altered Shinobi Terrapins; it's another relatively simple 3 note theme, though it's far more enjoyable to listen to than any of Tyler's more recent villain themes. What appears to be a Turtles family theme appears in that already mentioned latter portion of the cue entitled Adolescent Genetically Altered Shinobi Terrapins, and for all it's ambiance issues, it is a genuinely heartwarming segment of music. Other themes are not currently discernible to my ears, though with more listens, that may very well not be the case; though other themes seem quite unnecessary with how much Tyler continually reprises the same Turtles theme, over and over again, until you somewhat resent it. Don't get me wrong, for I love the theme in all it's entirety at the beginning of the score. It's when Tyler cuts it into as many instances within the album as possible that it becomes irritating to the ears, and you begin to find it annoying every time it pops up for a brief 5 second portion. We get it Tyler; you love your main title theme! It's just we don't love it so much as to applaud every time it makes an appearance throughout the rather excessive running time.

Yet no matter how much I make the impression that I detest the simplicity and lack of originality on show, I can't help but tap my foot along to any of the addictive and fun percussion or brass riffs that play throughout Teenage Mutant Ninja Turtles, however illogical it seems. The key behind all the simplicity and repetitiveness between scores in regards to Brian Tyler has always been that his music has been what some would consider nostalgic fun, with just the right amount of blatancy and brass to fulfill such a description. And if anything, this score only furthers that belief of mine and many others, as it showcases all those properties. Anyone coming into this score should know from the onset that this isn't going to be some artistic renaissance for Tyler; this will be the same kind of score you received with Thor: The Dark World and Iron Man 3, with the only plain and major difference being that the action here seems far more constant than anything seen in those 2 scores. This seems due only to it's use in context; apparently, the film displays a great deal of action. The music could very well attest to that. It's also not too much of a problem, there being so much action music, as so much of it is executed with an air of style and grace that seems to come with each and every Tyler release. The places the score rushes off into in the heat of battle are all interesting and engaging, and leave you wanting more. The constant flurry of brass, strings and percussion, beating away to strong and particularly irresistible beats makes for a reinvigorating and enjoyable listening experience that, whilst not very intelligible to many, will provide a great amount of plain, simple fun for many an audience. 6 minute battles between the basic good vs. evil are generally incredibly entertaining, from the ecstatically energetic Splinter Vs. Shredder, to the addictive and varied Adrenaline, and they make for some of the most enthralling portions of the score. So no matter how much I criticise the film for it's creative and executional simplicity, the fact is that I enjoyed great portions of the score, and had myself a merry time.

Ultimately, isn't that exactly why I listen to Brian Tyler scores? This score is ridiculously simple at times and somewhat unoriginal, though isn't that exactly why we come to Brian Tyler? We want to escape the more intelligent and detailed action music, and wish to indulge in something that appeals to the child in all of us, who simply craves the most loud, simplistic of themes and cues. It's not to say that all of Tyler's music is completely mindless, as that is certainly not the case with any of his work, including this score; it's just it lacks a certain intricacy that leaves everything feeling so abundantly blatant. Is that necessarily a bad thing? In my books, certainly not! You don't need to incorporate the most intricate passages of music into your score for it to be considered a success, or even at all entertaining. Thor: The Dark World is a primary example of such a thing, as is Teenage Mutant Ninja Turtles. Does this album have as much replay-ability as that score? Certainly not! I can imagine this getting repetitive and boring after a certain amount of replays; though at this point in time, I'm relatively happy to go back and re-listen to this score again and again. Those who find it hard to enjoy any of Tyler's more recent action work should stay away, for this is everything that embodies any one of his average action music extravaganzas. Expect nothing more and nothing less, and you shan't be displeased. Teenage Mutant Ninja Turtles is available on iTunes and Amazon here and here.