Check it out... if you seek a slower but more compositionally-nuanced, intellectually sound modern thriller score than your usual fare, Child 44 a welcome departure from numerous cliches and trends for the genre

Skip it... if a seemingly boundless quantity of suspense-ridden build-up doesn't sound like your cup of tea, the score slowly but surely picking up stead over its duration 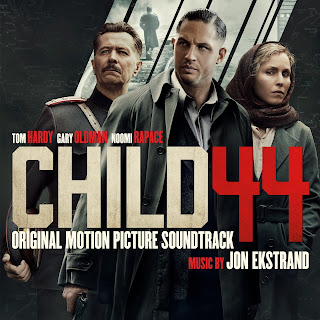 "You can almost visualize the story expanding before your very eyes, Ekstrand so conscientiously elaborating on these characters and their discoveries that it's mesmerizing."

Jon Ekstrand's dark and gloomy portrait of 1950's Soviet Russia in his score for common collaborator Daniel Espinosa's latest thriller, entitled Child 44, proves to be one of the most instantaneously engaging works of the year so far; quite the surprise, considering both the titles and composers I am comparing him with. His meticulous aptitude for gloriously detailed sound-design, paired with strong rhythmic pulsations, staccato string ostinatos and compelling metallic percussion patterns makes for an absolutely astounding palette of colours and flavours. The film for which it was composed for, revolving around a disgraced agent who joins forces with an army general to capture a serial killer murdering children, is a gloomy affair, though this has unfortunately not conjured critical appraisal, the entire endeavour reputed by the vast majority of critics circulating the Internet and abound. Espinosa's direction has been criticised, as has been the unconvincing material, some of the editing and the pacing, but this did not stop the relatively unknown Jon Ekstrand from providing an exceptional score; one that captures grit, darkness, dread and foreboding suspense in its relatively extensive length.

The score's opening third is a fever-pitch, lightweight assortment of electronic fluctuations and string arrangements, the mood subdued but nevertheless permeated with a towering presence that never alleviates its grip on the listener. Ekstrand treads carefully, restraining his lyrical inclinations enough in these more sombre of instances to provide a murky and intense range of instrumentation and compositional nuances that prove suitably compelling. Ekstrand's primary tendency within the score revolves around subtlety and astute establishment, the bombast tendencies of many of his more prolific contemporaries overshadowed in this instance by an intriguing blend of piano melodies, rich violin work and understated thematic concepts. This latter element is perhaps to the score's detriment, as whilst Child 44 is generally consistent (to an agreeable extent) in regards to sound, it contains few truly notable thematic identities that shall stand out to an average listener. 'Opening' establishes a carefully cultivated methodology, full of expertly executed solo string passages, and perfectly encapsulates the mood of the entire score. A distinct romantic identity for the male and female leads, played by Tom Hardy and Noomi Rapace respectively, is introduced in 'There Is Only You', and it serves as the most definitive concept on offer throughout the duration. Suspense and mild action is the norm for the album, but Ekstrand never allows these constraints to degrade the quality of any of his potential output. His bass-heavy mix is extremely versatile and full-blooded, an admirable quality for a thriller score; so many thriller scores nowadays feature stagnant mixes, filled with dreadfully lifeless brass and piano work. Child 44 is a rampant, finely-tuned ordeal, that rarely lets itself fail technically nor narratively.

All the same, as with any project, there are exceptions to this rule; a lack of proper gain equalization within 'Brodsky Betrayed' means the first half of the piece feels small and non-existent in comparison to its eventual climax; similarly, the guitar within 'Are You a Spy?' feels unbalanced and far too loud for the rest of the mix, overpowering everything else in sight. Qualms of this nature are rare though, Ekstrand and his collaborators taking means to present a work which is mostly faultless in its final arrangement. Specific highlights from the running time include 'Volsk', with its unnerving and sentimentally-charged string swells; the long and brutal 'Alexander's Death'; the gorgeously well-paced, meticulous and striking 'Captured', and the profusely menacing, slowly building but undoubtedly satisfying 'Vlad's House'. In between, Ekstrand lays the groundwork to achieve narrative bliss, the score developing in a steady but reasonably-paced fashion, elaborating on events with pristine clarity. You can almost visualize the story expanding before your very eyes, Ekstrand so conscientiously elaborating on these characters and their discoveries that it's mesmerizing.

At the end of the day, it's nothing profoundly unique, but it does execute its job most efficiently. Whilst not always captivating, and sometimes even overbearing in its instrumentation and mixing (see 'A New Home' for a prime example), Child 44 comes off as an intelligent albeit slow induction into the plethora of 2015 thriller releases. Whilst it's most certainly not a score that one shall revisit often, it does contain enough intellectual and emotional resonance to rivet, enchant and shock with its eventual outcomes. You can purchase Child 44 on Amazon or iTunes, here and here.