Check it out... if you seek a score which possesses subtlety, elegance, emotional resonance, impactful thematic concepts and genuine tension; all from the oft-times disappointing Lorne Balfe

Skip it... if you possess an innate disdain for anything Remote Control, as Blackwood indirectly takes influence from numerous composers, though to a far lesser extent than Balfe's usual fare 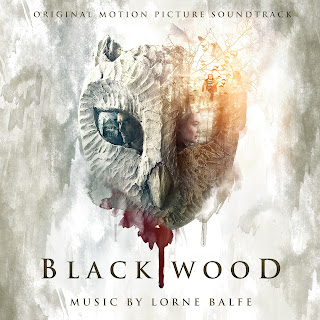 "Elements of romance, mystery, drama, thriller and horror perfuse the near-hour long running time, and it makes for a reasonably diverse listening experience that never fails to at least partially maintain one in rapt fixation."

Spectral visions pervade the conscious of college professor Ben Marshall in Adam Wimpenny's 2014 thriller, Blackwood. Destined for obscurity from its onset, this little known film was released to dismal critical reactions during August of last year, scorn from all corners of the Internet and abound dissuading any mainstream recognition, to the dismay of some of its fans. Whilst appraised for its production design, cinematography and ambitious goals, the film failed to deliver within its finale according to many critics and audience members, and adheres to a plethora of horror conventions and tropes that feel horribly dated. These issues are commonly seen infiltrating modern thriller and horror fare, screenwriter's now seemingly lacking the sufficient creativity to match the technical prowess of the genres. Meanwhilst, Lorne Balfe's orchestral score, finally released on album just shy of a year following the premiere of the visual content, has seen very little attention, whether negative or positive. This is a surprising detail, considering the composer's recent output, his workload at present overtly extensive in quantity. Despite any qualms about the quality of many of his recent scores, one can not doubt his enthusiasm for the craft of film, television and video game composition, the amount of score releases from the man in the past twelve months indicative of his zest for music. This year has already seen such albums as Above and Beyond, Sons of Liberty, The Last Man on the Moon and Manny released, most to relatively moderate acclaim, and he still has Terminator Genisys and Jerry Jameson's Captive to come. Despite his multitude of recent production, nothing has actively astounded the scoring community, many remaining unmoved by his compositions. Blackwood should serve as an appropriate exception to that rule, as here, Balfe's full propensity for subtlety is teemed with genuine tension and meticulous variety. Despite a number of cliches permeating the carefully established atmosphere, Blackwood remains a grand and inventive composition, that should stun both the man's advocates and detractors. Considering I am oft-times part of the latter group, I find no better pleasure than offering this praise.

Balfe's penchant for experimentation within his scoring, namely with regards to mixing and sound design, has often lacked substance at its core, and his individual stylistic nuances lack exclusivity, his most typically exploited methodologies coming off as substandard simulations that emulate the mannerisms of many of his more successful and prolific contemporaries. These include Cliff Martinez, Clint Mansell, Brian Tyler, Ramin Djawadi, and undoubtedly and most blatantly, common Remote Control collaborator Hans Zimmer. He replicates their synthetic tendencies constantly, and his melodies often possess conventional, simplistic and underwhelming chord progressions, generally headed by either electronics or a string ensemble. Even his more accomplished works from 2015 have lacked a vibrance or speed that could have better distinguished them from the crowd of copycats that litter film composition nowadays. His last truly astonishing work was last year's The Penguins of Madagascar; a somewhat orthodox approach to the subject matter he was gifted, but a score that was nevertheless expansive, ambitious and undeniably versatile. Uptempo brass concepts melded with woodwind trills, whilst strings flew about in all manners of direction; it was the most frenetic Balfe has ever been, and as such, remains an entertaining album to revisit.

Revitalizing his tired usual compositional inclinations, Balfe has successfully concocted his first truly impressive album of the year with Blackwood; an amalgamation of forceful string leitmotifs, atmospheric sound design and celesta implementation. Taking influence from numerous genres, the score stands out as one that doesn't necessarily cohere to the tropes and conventions of any specific category of film composition. Elements of romance, mystery, drama, thriller and horror perfuse the near-hour long running time, and it makes for a reasonably diverse listening experience that never fails to at least partially maintain one in rapt fixation. Balfe paces himself exceptionally well over the duration of the album, highlighting a range of emotions, events and characters with pristine ease, nothing here feeling particularly overwrought; a contrast to many of his previous efforts, whom were teeming with excessive sentimentally or lacking in elegance. There are certainly instances where the score seems to halt in momentum, yet these begrudgingly tedious and uninspired movements in the flow of the work present themselves less than one would initially anticipate. Still, they are present; 'First Night in Blackwood', as an example, features a consistent, droning note that lasts for upwards of a minute, detracting from otherwise outstanding ideas that appear throughout the piece. For those uninterested in enduring long and monotonous periods of derivative despondency, you may also seek to avoid the tracks 'A Masked Boy', 'Worry' and 'An Explanation', all of which feature prolonged durations of meaningless drivel (that said, the latter two pieces are comprised of some genuinely terrifying and startling concepts, so take a listen to them both at least once).

Instrumentally, Balfe mostly succeeds at evoking the orchestra's full potential, namely in regards to the string section and the piano, whom both are relegated appropriate opportunities to shine. The way Balfe manipulates the violins and cellos, specifically within 'Olivia Warner', to create a juxtaposition between bass-orientated intrigue and despair and general lightheartedness, is perhaps his most impressive achievement in this context, and worthy of ovation. The most surprising feature in terms of the instrumentation is Balfe's rhythmic devices, employed here to astonishingly effective results. The precise and timed nature of these elements feels eerily reminiscent of Zimmer's organ, synthesizer and piano pulsations within last year's brilliant Interstellar; see the opening half a minute of 'I'll Rip Your Throat Out' for an example of such. Balfe focuses on high-pitched woodwinds to capture a feeling of desperation, remorse and panic, which serves as an amiable and applaudable contradiction to the norm within modern horror, which commonly relies on staccato and tremolo violin repente entries to mesh with horn, cello and timpani drones to fulfill a base requirement for a general unsettling atmosphere. This stratagem can work relatively well in the context of film, but remains hopelessly inadequate as music itself. Balfe accesses both treble and bass sections of the orchestra, and molds it (when he decides it necessary) alongside an undercurrent of synthesizers, to produce a tension-ridden soundscape that avoids numerous cliches of the genres it is inherently tied to.

That doesn't mean the album wholly avoids tropes which often populate the lengths of other horror releases; 'Worry' features a dreadfully excessive jump-scare soon after the 4:00 minute mark, that explodes without any semblance of subtlety nor intelligence. That said, in moments like these, it's hard to wholly blame the composer, as he was undoubtedly pressured by either the director or the producers to adhere to the common principles of modern Hollywood horror scoring at specific intervals, this instance being just one of them. These insignificant lulls in intellectual dexterity aren't all that common, and so I anticipate they shan't hurt a listening experience too much for the average individual. Ultimately, the biggest concern anyone should have with the score is the mixing and recording of the whole album, which is reasonably inconsistent in quality. Much of the first third of the score is reasonably well recorded, the celesta the only voice which feels markedly out of place; it's immediately apparent within the opening track, 'Harry's Story', that the instrument is either not being recorded in the same room as the rest of the orchestra, or it is being recorded separately. 'Their Precious Hero' features another celesta melody in its latter half which doesn't feel as compressed as its string and piano brethren, and it stands out like a sore thumb. There are also minute periods where the instrumentalists can be heard moving about, and a buzzing seems to take hold of the recording. But, again, these faults are only witnessed within minute periods, and rarely exceed anything above half a minute in length.

Thematically, Blackwood is one of Balfe's most admirable works, a number of defining identities littering the soundscape from beginning to end, and describing an easily discernible story and character arc. The primary celesta theme, introduced within the aforementioned 'Harry's Story', is a particularly addictive leitmotif, the underlying intrigue of the melody partially bolstered in prominence by the deceptively cutesy high-pitched sound elicited by the instrument itself. The motif is repeated within 'Olivia Warner', 'Their Precious Hero', 'An Explanation', 'Four Chimes' (in this instance, the motif appears subtly underneath a female choir and a beautiful string crescendo, before exploding out into the forefront alongside the timpanis, all to gorgeous results), and 'Blackwood', and it proves suitably adept. Other relatively important thematic concepts include a 4 note motif best expressed within 'I'll Rip Your Throat Out', another 4 note string ensemble chord progression, explored most diligently throughout the finale, 'Blackwood', a three note piano identity, found in the opening to 'Olivia Warner', and a 4 note piano leitmotif, seen during 'First Night In Blackwood' and 'Paying a Visit'. There are also a range of woodwind melodies that pervade the running time, and their breathy mixing allows them to add another textural component to this already well seasoned and diverse effort.

The highlights of the score are the final four tracks, which cement Blackwood as one of Balfe's most dexterous, intelligent and worthwhile albums yet. 'Four Chimes' features brutal percussion, insistent celesta, piano arpeggios and some gorgeous string melodies. It is followed by the slow yet strangely compelling 'Some Aren't Meant To Be Together', and the unparalleled standout of the score, the penultimate 'Cadenza'. The latter features a solo string performance of the 4 note motif seen within 'Blackwood', the subsequent piece, and it is stunningly sombre, intricate, atmospheric and gloomy. Balfe's capabilities in regards to synthetic composition, gradual development, thematic incorporation and sound design are best showcased here, and it serves as an appropriately intelligent, climactic resolution to the album.

One could detract points for the various similarities to other works strewn amongst the running time, but this seems unnecessary, as none of these statements prove particularly irritable nor substantial enough as it is. In all honesty, the vast majority of my gripes with the release stem from nitpicking; when I stand back and appreciate the album as a whole, it's very difficult to sizably criticise. Most of the qualms I usually have in regards to Balfe's usual stylistic approach are not applicable in this context, Blackwood possessing individuality, subtlety, compositional elegance and raw evocation. It's easy to replay, it is grand in ambition and execution, and the average listener will come to easily embrace the gorgeous and easily identifiable thematic material. Whilst lacking in some of the ostentatious and captivating flair of The Penguins of Madagascar, Blackwood succeeds in eliciting emotion, brooding with determined force and exhibiting legitimate tension. It is a triumph for a composer who often evokes little more than disinterest from the scoring community. This is a bold step forward for Balfe stylistically, and I desperately hope he continues on this route for Terminator Genisys. This comes highly recommended. You can purchase Blackwood on Amazon or iTunes, here and here.

Additional notes about release: a digital booklet is available when one purchases the album from iTunes.