Check it out... if you're appreciative of bountiful, beautiful fantasy composition, Javiar Navarrete providing as such with this rampant, thoughtful and sentimentally-charged foray

Skip it... if an innate distaste towards western/eastern orchestral hybrids prevents you from appreciating intelligent compositions that aptly service the emotional and narrative requirements of the cinematic context and a general listener's own inherent desires 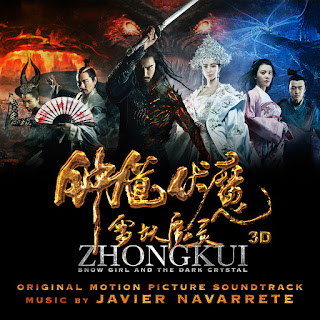 Javiar Navarrete, one of Spain's most prolific and well-known film composers, returns to the big screen after a two year hiatus to deliver Zhong Kui: Snow Girl and the Dark Crystal, a splendour-wrought, fantasy driven masterpiece that reigns as one of the years most purely engaging, thematically dense and enjoyable listens to date. Navarrete is familiar with the genre of fantasy, his most beloved and acclaimed score, Pan's Labyrinth, having been composed with the same dazzling scope, instrumental grandeur and leitmotific intricacy as Zhong Kui. Thus, the composer and subsequently his compositions feel at home with the vast and booming sound incorporated within. The film, a primarily Chinese-led production, directed by Academy Award winning cinematographer Peter Pau (whose work on Crouching Tiger, Hidden Dragon has been since cited as some of the finest visual work of this century) delves into an adventure that spans the width of a range of gargantuan realms that include Heaven, Hell and Earth. Whilst the film hasn't been received very positively, the score has seen a great deal of appraisal swept towards Navarrete; a composer who is no stranger to critical acclamation.

Compositionally, Navarrete's work is at once comparable to the grandiose magnitude of Howard Shore's Lord of the Rings, John Powell's How To Train Your Dragon series and any number of Horner fantasy exploits, yet it has a tactile peculiarity about it that feels individual. This is not a score which feels as if a western composer is emulating the mannerisms and instrumental variety of an easterner, but more so a hybrid that combines contemporary western orchestration with eastern percussion, tempos, flutes and other forms of instrumentation. Immediately striking, the relatively understated but nevertheless evocative central motif is presented forthright within the opening, entitled 'In Heaven'; Zhong Kui consequently develops its individual components patiently and efficiently. This same theme is subsequently restated numerous times throughout the duration, and Navarrete, intelligently, is never content to leave it as it is. Constant development enunciates the composer's desires to make this feel as if its a living, breathing soundscape, full of personality, development and growth. Navarrete, an individual who understands the necessity of a driving force, adds purpose to his oft-times overwhelmingly frenetic writing, the string counterpoints and arpeggios that fly in all directions held together by his primary melodic concepts and soaring violin statements. Nicholas Dodd's orchestrations add to this feeling of definitive direction, his work exquisite, from beginning to end. The mixing and mastering remains virtually perfect, every element in the recording allocated appropriate amplification, equalization and gain, making for a dexterous and lively atmosphere, uninhibited by technical concerns. Rich in allure, Zhong Kui is a truly mesmerising score, and despite its extensive 71 minute long length, rushes by. Navarrete adds yet another impressive album to his respectful discography. You can purchase Zhong Kui: Snow Girl and the Dark Crystal on Amazon or iTunes, here and here.

Additional notes about release: the iTunes purchase comes with a digital booklet.