Check it out... if you seek more of the sporadic madness featured within The Penguins of Madagascar, or the sincerity of Above and Beyond, both found here alongside some of Lorne Balfe's most accessible and fun action writing

Skip it... if constant reprisals of a single, distinguishable central theme distract you from the underlying technical competence of any given score, as Home is structured in such a manner for much of its length 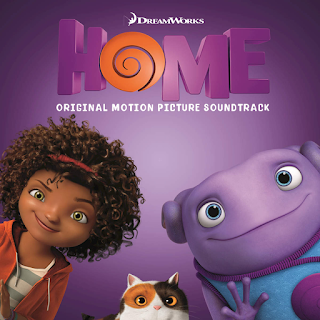 When it comes to quantity in regards to releases, few have outmatched Lorne Balfe's efforts in the past six months. A seemingly endless stream of mostly serviceable albums have seen the light of day, thanks to the insane efforts of one of the industry's most dedicated, enthusiastic and consistent composers. And despite the debatable quality of these works in terms of melodic intricacy, thematic dexterity or individuality, he very rarely delivers a score that is wholly without merit. Home is a score that doesn't stray too far from any of his most characteristic animation methodologies, yet remains positively endearing and entertaining. Fluent, heartwarming, and filled with catchy leitmotific concepts, the score possesses nothing overtly inventive, and feels particularly reminiscent of Balfe's own recent The Penguins of Madagascar; a far superior score when considering speed, accessibility, comedic timing and general exuberance. Still, Home remains an easily lauded, worthwhile, if not wholly impactful work, that should sit easily on your shelves, if you choose to purchase it. Its concise length makes for easy listening sessions, and the enthusiasm of the performances alone transform what could have been only a well-intentioned animation score into an oft-times bombast, exciting and frenetic foray, that whilst never veering too far away from convention, is consistently appreciable.

Balfe's primary leitmotif for the score, a five-note brass (generally) progression, repeated in numerous registers, is immediately introduced within the definition of frothy; the opening track, 'Symphony of Oh'. The sheer versatility of the theme remains one of the scores defining attributes, and if Balfe hasn't ingrained this insatiable tune into your conscious by the end of this aforementioned track, do not fear; his persistent and never-ending reprises in the subsequent cues shall do the trick. The score suffers a brief instance of respite after this opening, where all excitement is virtually drained from the duration, and strange recording and mixing qualities become evident; for example, why does everything sound so excessively large within 'Gratuity's Apartment'? Could the reverb dial not be pulled back a little, to allow for a more natural soundscape? All the same, the score fires back up during 'Two Fugitives', and seems to slow down rarely afterwards. The furiosity of the work is insane, Balfe meshing together successfully multiple layers of instrumentation, yet never discounting coherence; there is always a cohesive, thematic direction for both the general sound and melodic components of the score. The jazzy vivacity of 'Frolicking in Paris' is gleefully enticing, and despite being a poor album-ender, remains an exceptionally well-composed piece on its own terms. The highlight for the work is undeniably 'Smek Down'; an onslaught of delightfully energetic progressive motion, that gracefully balances both menace and heroism intrepidly. The first minute features a darker sound palette, before a key and register change allow the main theme to explode into action, and change the tone remarkably efficiently, without upsetting the tempo too drastically. The piece then shifts into durations of sentimentality, all without losing the same kind of vigour it possesses in the opening minute and a half. Moments of genuine resonance are surprisingly abundant all throughout, namely from the unexpectedly sincere latter half. The string and percussion work within 'Knock-Knock' proves irresistibly beautiful, and the general crescendo of 'Returning the Shusher' is delightfully well-arranged, the eventual introduction of the brass section in the final half of the piece the real kicker. Balfe covers all the necessities required of him, and does so with fantastic array of zest. Despite a number of tracks detracting from the general vitality of the effort ('Gratuity's Apartment', 'Saying the Sorry' and 'Sad-Mad'), as well as a number of minor motific statements for the female protagonist of the tale that underwhelm significantly in comparison to the primary theme, Home remains a generally entertaining escapade that shall enchant you with its rambunctious energy, even if it proves partially lacking in terms of structural prowess at certain instances. Give this at least one whirl before you dismiss it. You can purchase Home on Amazon or iTunes, here and here.