Check it out... if you possess an adoration of melodic, affecting romantic composition, Craig Armstrong's latest work one of his most emotionally impactful

Skip it... if you typically disregard scores with a prominent classical influence, Armstrong's beguiling writing accurately grounded in the time period of the visual content in this context 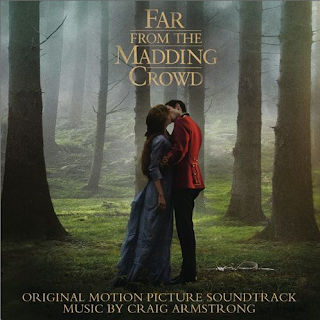 When it comes to romance, few composers can match Craig Armstrong; his lush soundscapes and stirring string arrangements beckon gushing praise from the masses, and his writing always feels passionate and sincere, two qualities sorely lacking in the vast majority of modern romance albums (see: The Longest Ride as a recent example). Armstrong is provided a canvas of spectacular proportions with 2015's Far From The Madding Crowd. Directed by Thomas Vinterberg (who rose to international acclaim with his heralded 2012 drama, The Hunt), the film is an adaptation of Thomas Hardy's 1874 novel of the same name, and has garnered a great deal of critical and communal acclaim. For his score for the title, Armstrong utilizes classical influences to infuse a period-sound, and thus, he is afforded a wide range of lyrical options to achieve the soaring, older sound required of his work. Whether assessing the album based solely on technical wizardry or emotional impact and resonance, Far From The Madding Crowd stands out as one of the year's most dense, intelligent and harrowing releases so far. Armstrong introduces us to the world we are to preside within for the fifty-six minute long album with 'Opening', a captivating, serene, string-based composition, that immediately captivates. Influences range from various classical pieces, to Dario Marianelli's magnificently evocative Atonement, to the delightfully invigorating work of Abel Korzeniowski (most notably his magnum opus, Romeo and Juliet). From the moment one presses the play button, they are swept away into a world full of intimacy, avidity and pain.

Armstrong's thematic devises are all relatively straight-forward, yet remain as emotive and touching as anything he has produced before. Motifs grounded in a rustic impression imbue the score with a beautiful, large sound, bolstered in size by mixing that seems to accentuate and articulate the intended locale of the visual content (Victorian England). The recording feels unobstructed and free to impart the necessary sentimental qualities, and it makes listening to the score invariably easy. Luscious and expansive string melodies take up much of the duration, but small instances see them discarded for a more boisterous mood; the Eliza Carthy Band (fiddle) and Saul Rose (melodeon) play features on a number of tracks, including 'Dribbles of Brandy', 'Swiss Boy', 'Michael Turner's Waltz' and 'Jenny Lind Polka', and they infuse jubilance into an album of underplayed drama. The highlights of the score are those which have a heavy cello undercurrent, adding a feeling of trepidation and despair to the already conflicted string section. 'Fanny and Troy' features a gorgeous two note motif, played on all manners of higher-register instrumentation; from violins, to violas, to airy flutes. It is made memorable by an apprehensive quality that permeates the performances. Underneath this melody lies a cello ensemble that adds a foreboding sense of danger. It's an exceptionally affecting track, and highlights Armstrong at his finest. We are also treated to hymns of the highest calibre, 'Jerusalem the Golden' and 'O Come, O come, Emmanuel', performed by The Dorset Singers and the Yeovil Chamber Choir. 'O Come, O come, Emmanuel', another stand out of the duration, feels oddly reminiscent of 'Funeral Canticle' by John Tavener; an absolutely stunning cue utilized within Terrence Malick's The Tree of Life. It's exquisite, to say the least. For all the score's compositional elegance and expressive ardour, it doesn't lurch into blatant romance until the finale, 'Far From The Madding Crowd Love Theme', which proves to be one of the scores most astounding inclusions. It's nice to find a restrained yet plentiful romance score; one that never feels excessively melodramatic nor underwhelming, both adjectives which aptly describe the disappointing state of the modern romance composition. Craig Armstrong exhibits this genre's unrelenting potential, and Far From The Madding Crowd serves as one of his finest displays. You can purchase Far From The Madding Crowd on Amazon or iTunes, here and here.