Check it out... if you triumph visionary work which intends upon doing something entirely contradictory to genre conventions; 808s and Heartbreak being the epitome of unconventional

Skip it... if you are unwilling to depart from the same Ye who gave us the soulful College Dropout or the melodic Late Registration, and are sternly against new-age West productions 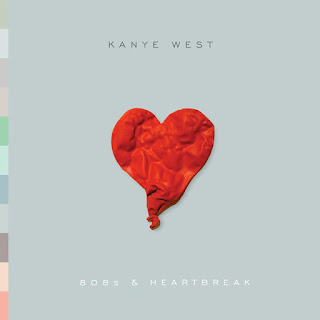 Pulsating like a heart; embellished with the sound of a cardiac monitor; lost in the world, drifting aimlessly. It all begins with a synthetic crescendo, before fulminating into a lumbering and expressive chord progression. The bass drum rumbles underneath the melody, acting as a force of primal antagonism. Perverted confessions of violence tarnish any goodwill we reserve for the vocalist, his requests for reconsideration in the face of reproach and rejection never truly convincing. "When I grab your neck, I touch your soul." He offers statements so intentionally jarring that it's startling. Who is this disheartened, volatile and dejected soul, spouting vitriolic lampoons as if he was high on the immediate effects of heartbreak?

Through a haze of synthesizers, heavily manipulated percussion and sonorous cellos emerges what is now considered one of the pinnacles of artistic expression and influence. Lush melodies are substituted for minimalistic composition in an attempt to evoke the most melancholic reaction possible. A meticulous attention to detail is still evident, the artist's productions as sonically rich as one has come to expect. But his soundscapes are more sparse now. Despite the long and arduous ostinato that permeates the entire duration of 'Street Lights', the whole track remains as it was from the first note; laden with emotion, regret and emptiness. 808s and Heartbreak is just that: an ode to the bottomless pit that is remorse, delivered by a man unbound by genre nor convention. In it, Kanye West, the world's most prolific egomaniac doesn't just admit his faults. He offers his detractors a knife, and allows them to shred his clothing and pierce his chest. He is stripped bare before the world, and before himself. Through his art, he explores the myriad of temptations, flaws and self-accusations that have only been touched upon briefly during his prior outings. This is not the retro-Ye we are used to. The death of his beloved mother, Donda West, and his split with long-time girlfriend Alexis Phifer have affected him too greatly to be dismissed. They have changed him, and that change requires admission and vexation. New-age Kanye abandons pretense; this is the composer's pain, reflected through music. Welcome to his heartbreak.

What separates his despondency, and thus this album, from all other attempts at communicating personal sorrow is the way he represents his anguish. West successfully manages to convey the rigorous, unrelenting self-derision that accompanies heartbreak so profoundly. The thumping endlessness of opener 'Say You Will'; the dismal atmosphere of 'Welcome To Heartbreak'; the brooding bassline of 'Love Lockdown'; the wavering synthetics of 'Coldest Winter'; West seeks to define what true desolation feels like. He invokes both the universal sentiments that accompany gloom ("It's 4 a.m. and I can't sleep/Her love is all that I can see"), as well as the more personal complexities that characterise West's own turmoil ("Seems like street lights glowing/Happen to be just like moments passing/In front of me"). In the album's most refreshingly honest instances, the artist sacrifices cheap melodies and chord progressions for ambiance and sound-design. He has fallen to the bottom of a dark and all-encompassing chasm, and there are no opportunities for light-hearted fluff. He shuns the clean execution of Graduation, and emphasises the rough, aggressive edge of a range of synth fluctuations, live tribal drum recordings and the titular 808 drum patterns. All these stylistic inclinations help to define the trajectory of the album as individual.

Even when West veers into more orthodox territory, as he does with 'Heartless', 'Love Lockdown', 'Paranoid' and 'Robocop', there's something that remains admittedly desolate about the record. 'Heartless' churns away with methodical purpose, a staccato flute melody adding a breathless quality to every beat; at the same time, it feels like West is running out of wind with his singing and rhymes, and he seems to struggle as he moans his lines during the outro. The much-debated auto-tune implementation helps to articulate this austere audial environment, adding yet another layer of woe to this already effective atmosphere. Despite the quality of this track, the album doesn't wholly avoid instances of tonal inconsistency, both 'Paranoid' and 'Robocop', whilst sensational in their own rights, feeling out-of-place in-and-amongst so much despair and contempt. But for the vast majority of the record, West adheres to the bleak methodology he conceives during the opening track, and it makes for an aptly potent and compelling work.

What's most intriguing is how the album develops, and how the mood of the LP alternates from piece to piece. The lonesome, stark tenor of 'Say You Will' morphs into the introverted and dark 'Welcome To Heartbreak'. The soaring string motif that defines the final half of 'Robocop' moves appropriately into the beautiful and accepting, somewhat spontaneous piano embellishments of 'Street Lights'. The dismal and disheartened 'Bad News' is followed by a juxtaposition of a track; the loud, explosive and aggressive 'See You In My Nightmares'. Acceptance of agony in the former song is contradicted by the acidic hostility that distinguishes the latter, as West's frame of mind violently shifts. The record climaxes in a fashion unheard of for the man before or since 808s; forbearance not being achieved. 'Coldest Winter' maintains the dissonant, apprehensive mood of the rest of the album, West lamenting the death of his mother in the most evocative of ways. Even with the addition of a live freestyle in the form of 'Pinocchio Story' as the final track, the artist refuses to resolve his album in a manner that proves definitive. But for West, that's obviously the purpose; 808s and Heartbreak did not resolve his angst, misery and suffering, and to end it on a note that doesn't convey his real attitude would be misleading. This is an album of pitiless devastation, and thus West concludes his work in such a way.

To not allow oneself to be enveloped by the aura of the piece is to dismiss it entirely. The whole record relies on one being able to lose themselves in the remorse of West's plight, and to accept the stylistic decisions made by the composer and his associates as forms of expression, devised to best accentuate what the man endured over late-2007 to the recording stage. 808s and Heartbreak is not the refined masterpiece that would soon come to fruition in the few years after this release, nor is it the bubbling spectacle of either Late Registration or Graduation. What it is is something of a whole different nature. Its Kanye's ascension to the higher tier of music. His influence is so far-reaching that he exacts change within the electro-pop, pop and R&B genres, and he does so for their benefit. 808s and Heartbreak is not perfection, but it is a deranged, powerful and somewhat beautiful variation of such. You can purchase 808s and Heartbreak on Amazon or iTunes, here and here.

Additional notes about release: iTunes offers an exclusive edition of the album, which features video recordings of 'Pinocchio Story' and 'Heartless', as well as a digital booklet.