Check it out... if you have always sought a Horner score that truly abandons his typical compositional methodology, the man embarking on an entirely new sonic direction with Southpaw

Skip it... if the relentless percussive and synthetic pounding of scores like Man of Steel, Ex Machina and Gravity repulse you, for Horner draws inspiration from scores of that ilk for this release 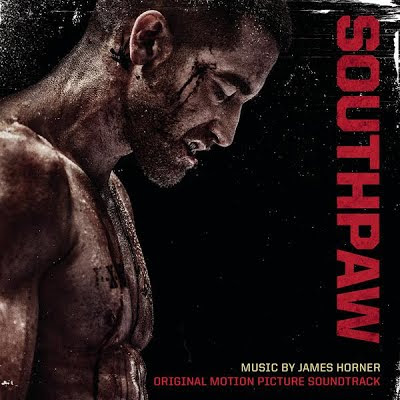 "A resonant, expressive if not somewhat challenging score of an exceptional quality."

On June 22nd, 2015, the scoring community stood rapt with trepidation and fear. A plane belonging to one of the most famed, critically acclaimed and beloved film composers of all time, James Horner, had crashed, and the individual who had inhabited the craft during the incident was unaccounted for. Fans of the composer's work lamented the mere possibility of his passing. When it was revealed shortly after that it truly was Horner in the crash; that he had died, a collective shock gripped the scoring world. Critics grew silent with sorrow; casual listeners expressed condolences for the composer's loved ones; Hollywood stood still. Grief of the highest accord was demonstrated from high and low. Directors who had worked with Horner spoke out about his impact on the world of scoring. Messages of mournful passion, detailing the effect his music had on people littered the Internet and abound for weeks on end. It was truly a period of horrendous melancholy.

With his final score, that to Antonie Fuqua's boxing drama Southpaw, Horner sought to traverse a new sonic route. Whilst he knew not his eventual fate, this release serves as a sort of poetic juxtaposition to the vast majority of the rest of his discography. The sweeping, evocative orchestral colours that have defined his style for decades on end was abandoned for a more introspective aural palette, bass pulses, string ensembles and sound-design substituting for the orchestral grandeur of his usual output. The sheer contrast between Southpaw's brooding and rugged electronic dissonance, and the more traditional melodic and instrumental inclinations of Wolf Totem, another Horner score released earlier this year to roaring approval, is quite astonishing. This is one of the most startlingly individual works from the composer in years, taking direct influence from certain forms of trap music, hip-hop production and minimalistic sound-engineering, a surprisingly courageous leap for a writer of the ilk of Horner. How peculiar is it that one of the most prolific classical composers in Hollywood; a man famed for his soaring string passages, bold brass melodies, choral colours and intricate, dense woodwind writing; have his final score be one more similar to Ben Salisbury and Geoff Barrow's Ex Machina than anything belonging to his own filmography. It is truly an astonishing thing.

Removed from circumstance though, does Southpaw remain adequately compelling, moving and/or entertaining as a solo listen? The answer is a resounding "yes". What Horner has concocted here is nothing short of outstanding; a resonant, expressive, if not somewhat challenging score of an exceptional quality. In one of Horner's most daring escapades, he tackles genres that are usually frowned upon by the scoring community as a means to achieving something wholly distinct, at least by his own standards. Ostentatious leitmotifs, those that have characterised his stylistic propensities for the length of his entire career, are abandoned for dark and pensive themes that explore the pain, turmoil and self-loathing felt by the protagonist of the visual context, boxer Billy Hope. Horner articulates the solemn mood of the feature aptly by applying layer upon layer of synthetic ambiance, muffled percussion and solo piano. In one of his most calculated and subtle of releases, he slowly establishes anger and torment over the length of the album, before allowing it to erupt with cataclysmic fury in small but truly powerful instances. This is a score that needs to be taken in with full awareness and concentration, and felt by the listener deeply.

There are three sides to Southpaw that Horner elaborates on over the course of the fifty-two minute long duration. He introduces us to the first side, that of budding yet restrained wrath, within the initial track, 'The Preparations'. Horner wastes no time acquainting us with the mood of the album, a range of pulsating bass tones and distorted synthetic crescendos greeting us as they serve as a bed for an oddly isolated and solitary 8-note piano motif. The recording is so ripe with reverb that the physical instruments; piano, snares and other tangible percussive devises, all remain distant, whilst the synthetics are placed in the forefront of the mix. The same piano melody recurs within 'A Fatal Tragedy', 'A Cry For Help', 'Hope Vs Escobar' and 'A Quiet Moment...', sometimes accompanied by an underlying quarter-note progression, and always remains as sparse in execution as its preliminary establishment.

A range of secondary motifs, more closely associated to Horner's usual thematic tendencies than the previous concept, serve as the counterpoint to this initial side. They materialize within tracks such as 'A More Normal Life' and 'The Funeral, Alone...', which both sport synthesizer, string and piano passages, some reminiscent of The Amazing Spider-Man, others more closely and easily associated to the lumbering atonality of, say, It Follows. There are certain tracks where the presentation of these concepts feels excessively mawkish, as in the overbearing 'Dream Crusher' and 'How Much They Miss Her', which reprise these more light-hearted ideas in the most blatant, least interesting ways possible. But for the most part, these less heavy themes are offered brilliant developments from beginning to end, Horner subtly detailing protagonist Hope's ups and downs with gradual and minor changes in volume, tempo, instrumentation and performance.

For the more jagged and frenetic of tracks ('Suicidal Rampage' and 'Hope vs Escobar'), Horner's influences seem to directly flow back to the horde of Remote Control composers that litter the airways at present. Rumbling bass (2:54 into the latter track) proves redolent of Zimmer's Man of Steel; particularly the piece 'Terraforming', in a most favourable manner. The percussive elements employed within 'Hope vs Escobar' serve as exactly the kind of discordant form of instrumentation that is so constantly and unfairly ridiculed by modern scoring critics, and they are performed with such fierce aggression that it overwhelms the senses almost instantaneously, in an agreeable fashion. Abrasive electronic leads do not relent during the action pieces, the composer pushing his various tools to the limit in a display of ruthless hostility. All that said, 'Hope vs Escobar' does feature one of the most irritating displays of tonal incongruity on the album, the final two minutes abandoning the gloomy quality of the rest of the track, and switching to a brass register which comes off as insincere.

That said, this is but a small issue in-and-amongst a plethora of truly exceptional material. It's a dismal and introverted fifty-two minute long release, but for those willing to exert effort into focusing on how Horner implements both synthetic and natural sounds into a single cohesive product, it may very well prove rewarding. Southpaw is ambitious, genre-defying, and helps further establish Horner as one of the greatest film composers of all time. It is a dreadful shame to lose the man at such a point in his career; where his creativity seems to be at an all-time high, two exemplary scores released thus far for the year, and The 33 still to come. Southpaw is not necessarily revolutionary, the various components that make up the score having been conceptualised and executed in prior scores by other artists, namely Vangelis and Steven Price, but it's nevertheless a remarkable achievement for this composer. You can purchase Southpaw on Amazon or iTunes, here and here.