Check it out... if you seek a Marvel album that successfully combines a range of different and varied stylistic methodologies not commonly seen within the genre of superhero scoring

Skip it... if your only taste of the superhero genre's capacity has been in the form of DC's more brooding compositional work, as Ant-Man is the direct obverse of that approach 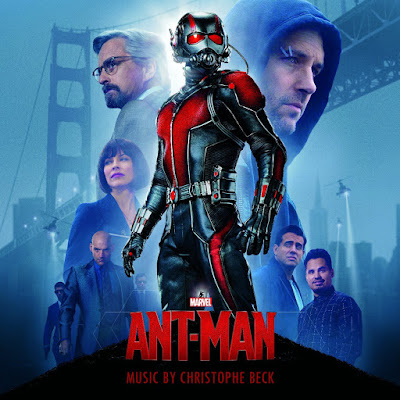 "For both casual and attentive listeners, a wealth of rewarding nuance awaits you with Ant-Man"

After the gamble that Marvel took with last year's Guardians of the Galaxy; a film full of characters and worlds unknown to the vast populous, it's no surprise that the company has invested a great deal of time and effort towards producing a similar venture in Ant-Man. Attracting numerous A-List stars, including Paul Rudd as the titular hero, Michael Douglas as Hank Pym and Evangeline Lilly as Hope Van Dyne, the film has received a moderate quantity of acclaim, critics citing the unabashed and sincere tone as major positives. The feature follows master thief Scott Lang as he is recruited by Dr. Hank Pym to undertake a series of missions under the guise of Ant-Man; a hero who, utilising a suit crafted by the doctor, can shrink in size, wield superhuman strength and control an army of ants. Together, Lang and Pym must stop the nefarious Darren Cross, Pym's former protege, from perfecting the same technology for his own purposes and using it as a weapon for evil. The picture is directed by Peyton Reed, most renown for his work within the comedy genre, and is scored by Christophe Beck.

Christophe Beck's recent resurgence in relevance, thanks namely to the success of 2013's Frozen, has brought more attention than ever to his work; whether that a positive or a negative, one must decide for themselves. His output has always been met with relatively mixed commentary, his capacity for commendable composition and rousing arrangements not always evident thanks to a number of prolific releases that have proven derivative and drab. For every Percy Jackson: The Lightning Thief, Beck offers us a disappointing foray that proves melodically and instrumentally underwhelming (Edge of Tomorrow). He is as unreliable a mainstream composer as they come. That said, in the instances where he succeeds in writing intelligent, entertaining music, he can shine brightly. Such is the case with Ant-Man; one of Beck's strongest outings yet. Filled with uproarious orchestrations, zany string flourishes, infectious pace and delightfully intricate action material, what the composer has delivered here is by far and beyond his most accomplished score in quite some time. For both casual and attentive listeners, a wealth of rewarding nuance awaits you with Ant-Man, the likes of which has been rarely seen before within the Marvel Cinematic Universe's aural installments.

Drawing inspiration from some of the more distinguished heist scores of all time, Beck approaches Ant-Man with a sly sense of humour, an articulate sonic palette and a dazzling range of central thematic concepts, all of which help to establish focus for this oft-times wild and boisterous effort. Led by an outstanding leitmotif composed as a 7/4 march, the album erupts with relentless drive as an eight-note staccato string ostinato and a more fluent woodwind passage manifest to create a stunning principal melody within the opening 'Theme from Ant-Man'. These interconnected ideas are reprised consistently throughout, adapted for brass and percussion performances at various intervals, and serve as the tonal building blocks for the rest of the score. The sheer diversity of techniques utilised to add longevity to the ideas proves humbling, Beck finding new ways to approach the reincorporation of the motif time and time again. He offers abridged renditions; he allows the percussive elements to handle the theme underneath the relevant action; he deconstructs the chord progression to apply sentiments than differ from those of the initial melody. What could have served as a basic throwaway superhero theme, Beck transforms into a marketable, versatile and nimble concept that refuses to yield whilst there is still opportunity to be had for meaningful development.

Up until 'CrossTech Break-In', Beck focuses more on texture, character and thematic development; after this track, he moves towards exploring the action set-pieces as the climax of the film rushes forth. Shifts in mood and style are common, but they never stilt any sense of cohesion the score possesses. Minor synthetic quarter-note riffs embed themselves within 'Honey, I Shrunk Myself' and 'Old Man Have Safe'; an enchanting jazz influence seeps into the work during the trio of 'Ant 247', 'I'll Call Him Antony' and 'Scott Surfs on Ants'; a gorgeous string motif is introduced within 'San Francisco, 1987' and then elaborated upon during 'Your Mom Died A Hero'. Beck's mixing and implementation of electronics can sometimes be found at fault within this opening half of the album, but moments of this ilk don't serve as anything excessively substandard. The real meat of the product comes in during the second portion of the running time, as the powerful 'Into the Hornet's Nest' comes to fruition; the presence of the antagonist, Darren Cross, comes in the form of lower register brass attacks, and a twisting of the original Ant-Man theme, offered its most easily discernible performances during 'A Center For Ants!', 'Cross Gets Cross' and 'Small Sacrifice'. The mass of action tracks during the final act of the score make for a dizzying roller-coaster of a finale, Beck's string lines growing more frenetic from piece to piece, and the woodwind and brass sections flying about in frenzied arpeggios to create a sense of forward motion. It all culminates in the touching, painful and gorgeously rendered 'Small Sacrifice', where Beck delivers what could be the finest three and a half minutes of music he's ever concocted. It's mesmerising stuff.

Details litter the work, and add replay value to an already sensational album. It triumphs over Brian Tyler and Danny Elfman's Avengers: Age of Ultron, released earlier this year to a great deal of acclaim, and serves as one of the most awe-inspiring efforts of Christophe Beck's career. It's held down by some questionable sound-design that feels out of place in-and-amongst the barrage of beautifully conceived symphonic material we are gifted throughout the vast majority of the duration. Tracks like 'Paraponera Clavata' and 'Signal Decoy' come off as slightly too tedious and unfocused for their own good, flow discounted for layers of labourious percussive elements. But for the most part, Ant-Man serves as a thoroughly compelling installment into the Marvel Cinematic Universe's extensive array of scores. Beck has instilled enough vibrant energy and dynamism to make-up for any contentious compositional decisions, and thus earns a stamp of approval. Seek out immediately. You can purchase Ant-Man on Amazon or iTunes, here and here.

Additional notes about release: four songs are included at the end of the running time; 'Borombon', 'Escape', 'I'm Ready' and 'Pink Gorilla'.