____
Check it out... if you're a Thomas Newman fan who enjoyed his previous foray into the world of James Bond

Skip it... if a subdued, somewhat generic, anonymous approach does not suit what you expect from your average Bond score, as Newman abandons the pizzazz that has defined the character and film series for decades on end, much as he did with Skyfall
____ 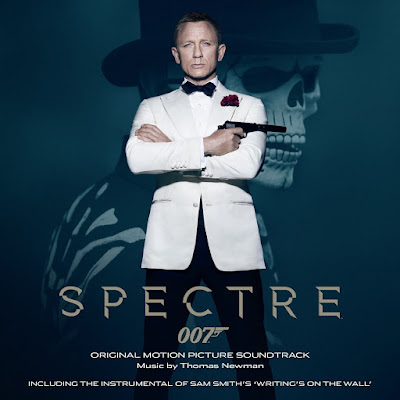 "Spectre does not tread a drastically different trajectory to its precursor, something that it (arguably) required"

After the decisive nature of his previous 007 work, Thomas Newman returns to collaborate with highly acclaimed director Sam Mendes on their sixth film, the latest inclusion into the coveted James Bond franchise, Spectre. The film stars Daniel Craig as the iconic British spy in his fourth appearance as the agent; here, he discovers and investigates the mysterious and wicked organisation SPECTRE. Newman's relatively admirable workload for 2015 has had many anticipating his second entry into the Bond series, despite the lack of acclaim afforded his preliminary effort. Skyfall, whilst serviceable in context and commendable for its rhythmic and structural finesse, was stuck with a dreadful album presentation (though this is debated by many) that excluded Adele's masterpiece of a title song, and a lack of distinguishing character. For a casual listener, the absence of personality or truly commanding, memorable thematic devises would prove alienating, and this led to a sense of anonymity that permeated the score's running time. Part a number of exhilarating, well-executed action sequences and some gripping swells of drama, Skyfall remains a thoroughly disappointing addition to the 007 musical canon.

For many, it should come as no surprise that Spectre does not tread a drastically different trajectory to its precursor (Newman has never come across as an advocate for change in regards to his own music), something that it (arguably) required, as despite a variety of admirably adroit highlights (the gloriously energetic 'Backfire', or the splendid string melody that defines 'Madeleine'), the eighty (!) minute long album does little to encourage newcomers to the franchise to explore further. Given, Spectre offers more instances of genuinely impactful composition than its predecessor, and proves to be a more consistent listen on numerous fronts. But the inconspicuousness that plagued Skyfall's length returns here, prevailing all throughout the duration. Thematic concepts are recycled more often than original leitmotifs are constructed, and thus, individual personality is forsaken in favour of scoring that feels reminiscent of many of Newman's contemporaries. As other critics have mentioned, Hans Zimmer's presence looms over Spectre insistently, dominating the listening experience. And whilst Newman's style is more nuanced and elaborate than Zimmer's own renowned methodology, the general progressions in narrative are eerily similar. Spectre's inability to form its own defining identity is its most troublesome drawback, and minimizes the potential for notoriety and memorability on a significant scale.

It doesn't help matters that the entire album is bereft of the moxie that have made Bond scores so enjoyable for decades on end. Spectre offers conventional action thrills, albeit accomplished to an impressive standard, but subsequently abandons the panache and sophistication of days gone-by by doing so. Composers who have previously worked within the series, namely John Barry and David Arnold, established an approach that gifted them opportunity to explore the musical ideas relevant to popular culture at the time of each separate film's release, but simultaneously provided them ample freedom to implement as much of the classic Bond refinement as they could. Newman's Spectre contains none of the savoir faire that should differentiate a Bond score from the mass of alternative pastiche efforts that litter the airways. If anything, Daniel Pemberton's The Man From U.N.C.L.E, an exceptional 60's influenced composition, feels more akin to the old-school flair that we expect from a 007 score than Newman's legitimate installment.

All that said, strictly speaking, Spectre isn't a bad piece of work. An assortment of sweeping string passages amount to fleeting moments of emotional gusto from Newman's mostly impassive canvas, and take any thirty second-long excerpt from one of the action pieces, and you'll be granted a wealth of detail. The aforementioned 'Backfire' includes choral responses, relentlessly forceful repeating string riffs, fiery percussion, and a general sense of forward-motion that just can't be halted. Despite Newman not incorporating a full-length statement of the classic Bond theme, brief fragments are woven into the tapestry of the album consistently. The most blatant and agreeable reference comes during the climactic 'Westminster Bridge', where a trumpet announces a short passage from the theme triumphantly, before allowing the crescendo that makes up the first two minutes of the piece to continue on its way. Other major peaks include the opening, 'Los Muertos Vivos Estan', with its sly allusions to the old Bond theme, performed on electronics, woodwinds, and even the entire string section; 'Donna Lucia', for its subdued yet dubious opening, which morphs into a gorgeous string motif; 'Kite In A Hurricane', which possesses an icy, synthetic-influenced palette of instruments, that are not alleviated of their inherent tension all throughout the cue's two minutes; and the rambunctious 'Detonation', which may be one of the finer action pieces of Newman's long and illustrious career. These tracks demonstrate Spectre's capacity for outstanding, invigorating composition, and illustrate just how much personality Newman can infuse into his work, if he feels a penchant for doing so.

The problem is that too often, this penchant is non-existent. His plentitude of technical wizardry is not enough to sustain a score which feels like it should be more individual than it is. It doesn't help that the release is so damn long; eighty minutes will elate fans of the film who wish to relive their favourite moments from the feature in musical form, but for anyone else, there isn't enough here to warrant such an extensive length. Cues like 'Crows Klinik', 'Tempus Fugit', 'Careless', amongst others, could be cut either partially or completely from the tracklist, and the narrative would remain unaffected. Spectre is, in all honestly, a good (or, at its finest intervals, even exceptional) action score; but the "007" logo adorning its cover demands a greater level of quality from its composer. Anonymity grips Spectre by the neck, and rids it of any and all distinction it could or may have once held. For fans of Newman and his usual stylistic propensities, feel free to take a look, but for those who expect a Bond score of a comparable quality to anything by Barry or Arnold, look afar. You can purchase Spectre on Amazon or iTunes, here

Additional notes about release: Tambuco, a Mexican contemporary classical percussion group, is featured on tracks one ('Los Muertos Vivos Estan') and eighteen ('Day Of The Dead'). Sam Smith's title song, 'Writing's On The Wall', is not included on the album, but an instrumental version of the song is featured on the tracklist.