____
Check it out... if you're intrigued by scores which successfully amalgamate both modern and symphonic compositional styles to offer unique and compelling listening experiences

Skip it... if you're opposed to scores full of dissonant synthetics, restrained performances, and palpable yet moderated malice
____ 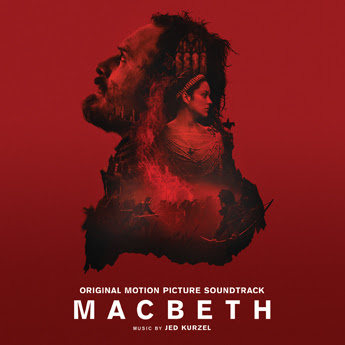 "Macbeth is the definition of polarizing, and is likely to alienate a large portion of its audience"

The unrelenting brutality of Jed Kurzel's score to his brother's adaptation of Shakespeare's beloved play, Macbeth, helps define it as one of the strongest and powerful works of the year to date. Stirring orchestrations, detailed sound-design, and an eclectic palette of instruments are all employed to aptly explore the gloomy and visceral nature of the cinematic context, and thus, the album experience is a perplexing combination of inharmonious dissonance and melodic structure. Macbeth is the definition of polarizing, and is likely to alienate a large portion of its audience; fans of symphonic grandeur will be disappointed by the amount of restraint exercised, and those who possess a disdain for electronic manipulation and synthetic implementation shall be turned off from the first piece. But in a similar vein to Johann Johannsson's score to Denis Villeneuve's Sicario, a wealth of tribal, uncharacteristically aggressive, and demented composition awaits those who feel up to the challenge of embracing such a brooding, atonal record. It's not for the feint of heart, but it is certainly rewarding all the same.

Kurzel treads a narrow line between all-encompassing, never-ending discordance, and slight melodic concepts, and it comes together to offer a punishing listen. The most outstanding and easily discernible instance of canorous-styled composition is gifted to the listener within the first two tracks; 'The Child, Pt.1', and its successor, 'The Child, Pt.2', have a definitive narrative, minor chord progressions from jarring violins, bagpipes, and other Scottish and northern European instrumentation, ascending in a rousing crescendo. The central three-chord progression that the symphonic and synthetic elements build off of speaks only to doom, desolation and unavoidable despair. Whilst the violins cry out with shrill anguish, the cellos offer a gloriously muscular juxtaposition, their deep and assertive presence a force of unwavering belligerence. Seeing as how the film is greatly concerned with the ruthlessness of war and the absence of innocence in a cruel world, Kurzel's reliance on the chorus of desperate strings and tribal percussion feels appropriate, and the execution sets an aptly despondent tone for the rest of the score. The composer offers a different view on the act of war in the third piece, 'The Battle', where a haze of electronics obscure a distant bass drum as it sets a stark pace. In comparison to the prior two cues, 'The Battle' is subdued in size and volume, yet no less hostile. Kurzel's Australian background is telling here, as the cellos and violas perform tremolo fluctuations similar to those which define the sound of the Didgeridoo, a native Australian instrument. Again, it adds a primitive form of antagonism to this nuanced and intriguing piece. The violins that install relative focus into the track have a folk gleam to them that helps establish the location of the film. It's all quite harrowing, the fascinating blend of modern and orchestral instrumentation instilling fear into the heart of the audience.

Compare these tracks to the comparatively absonant 'Inverness', which takes one of the scores more commonly referenced thematic ideas, the three-note motif from the opening two tracks, and clouds it in layers upon layers of flickering, dense strings. 'Epilogue' feels more akin to the vast soundscapes developed by Sigur Rós or Swans, post-rock groups more concerned with timbre and texture than lyricism and tunes, than the average composition produced by contemporary film composers. Macbeth is fueled at its most fundamental level by its central leitmotific concepts, but thrives due to the prowess of its more antipathetic, atonal design elements. 'Murder' is anchored and given purpose by its various melodic structures, but is gifted gravity thanks to its rustling percussive devises, ambiant atmosphere and odd embellishments; a croaking, almost undetectable woodwind here, a brass-like grumble there. These implementations supply an abundance of nuance, and allow Macbeth to stand out as its own individual, unique product.

Without a doubt, there are points where the quality strays from the norm, and the callous sounds that Kurzel has produced are too grating to be enjoyed. The 8-chord melody of 'Spot' is high-pitch and uncomfortable, undoubtedly on purpose, but offers no enjoyment, whether academic or purely audile, outside of its intended context. But for attentive listeners, there is much pleasure to be had throughout the length of Macbeth. The deep, mournful melancholy that permeates the organ on 'Landscapes'; the pained violin of the titular 'Macbeth', which explores the internal conflict the protagonist endures all throughout his plight; the rhythmic, rock-inspired abrasion of 'Turn Hell Hound'; the resonance of the strings on the gloomy yet menacing 'Banquo's Death'; a wealth of highlights litter the length of Macbeth. And whilst its ambitions aren't as bold or audacious as those of comparable efforts-Daniel Pemberton's brilliant Steve Jobs or Johann Johannsson's Sicario, for example-it remains a multi-layered, intelligent, cunning work.

But those aforementioned scores are likely to attract far more positive commendation due to their accessibility; the sounds that make up their tapestry appeal to an audience of greater mass. Where Macbeth's creativity and beauty will allude many is with regard to its demanding structures and harsh sounds. For the squeamish of the scoring community, beware; this is an album which disregards comfort and pleasantries almost entirely. Macbeth is a visceral, detailed, refined work of passion, that illustrates and realises the rises and falls of the visual context's protagonist with immense clarity. Kurzel has never garnered a great deal of attention with his previous efforts, and I desperately hope that with this work, we will see him offered more opportunities to shine in the future. This comes highly recommended. You can purchase Macbeth on Amazon or iTunes, here

Additional notes about release: none