____
Check it out... if you are a fan of Howard Shore’s more intimate and brooding scores or are curious to hear him write for a smaller ensemble, Spotlight being as good a place as any in Shore’s filmography to start.

Skip it... if you have an aversion towards Shore’s introspective scores or anything vaguely reminiscent of Thomas Newman’s standard rhythmic textures. 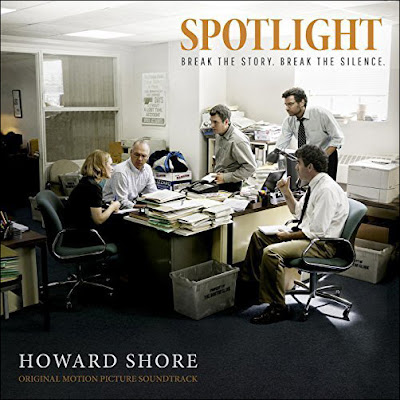 "The score is a mostly somber affair, toggling between two major moods, reflected in the two major themes."

Spotlight is an historical drama directed by Thomas McCarthy. Starring Mark Ruffalo, Michael Keaton, and Rachel McAdams, the film depicts the Boston Globe’s 2002 investigation into the Catholic Church’s sexual abuse scandal, one of many that have surfaced in the past 15 years. After making its rounds on the festival circuit, Spotlight opened to a wider release and mostly positive reception from critics, and may be on its way to many nominations and wins in the upcoming awards season.

Scoring the film was acclaimed composer Howard Shore. Whilst the Canadian had scored a variety of low-budget films in the 80s and 90s, he erupted into the mainstream conscious during the early 2000s with his gargantuan, highly acclaimed work for Peter Jackson’s Lord of the Rings trilogy, racking up the adulation of film critics and music fans alike, his three scores for the franchise having been triumphed as a towering (pardon the pun) achievement. Since then, he has become a regular collaborator with director Martin Scorsese, while making periodic forays back into blockbuster and fantasy territory, including with The Hobbit trilogy and the upcoming Pete’s Dragon. However, Shore has been known to frequently return to smaller-scale films that do not require the symphonic majesty of his Middle-Earth scores. In 2014, in-between Hobbit installments (perhaps to maintain his sanity), Shore penned music for Jon Stewart’s Rosewater, and for longtime collaborator David Cronenberg’s Maps to the Stars.

Spotlight is in a similar vein to these works, as it is led by piano, guitar, and some restrained strings. Listeners familiar only with Shore’s fantasy scores will find it a shock to hear such reservation from Shore. True to its subject matter, the score is a mostly somber affair, toggling between two major moods, reflected in the two major themes. The first is a melancholic theme performed on piano, which represents the suffering of the Church’s victims; it is given an introspective centerpiece moment in “The Children.” The second theme is for the Globe’s journalists and their pursuit of the truth. Although bearing a surface resemblance to Shore’s theme for Bard the Bowman from The Hobbit, it’s used quite differently, as it is played primarily on electric piano with rhythmic guitar accompaniment. It comes across as texturally similar to some of Thomas Newman’s work, as well as Shore’s own The Departed (which, incidentally, is also set in Boston). Whilst never appearing in any grandly defiant or victorious statement, the theme is calm but driving, doggedly accompanying the reporters as they persistently hunt down the truth. Both these themes recur throughout the score, oftentimes with Shore breaking the motifs down to their bare chord structure, such as in ‘Practice and Policy’ and ‘City on the Hill’, before culminating in the excellent penultimate ‘Delivering the News’.

Many of the other (very short) cues offer harmonically pleasing moments. ‘The Directories’ has the most overtly “Newman-esque” sound to it, a variety of different layers interacting before a bit of neat counterpoint between the bass line of the investigation theme and a secondary motif for the journalists. ‘The Sealed Documents’ takes the minimalist approach of repeating a figure while slowly shifting keys into a gentle catharsis, and ‘The Globe Newsroom’ offers a kind of melancholic dignity for the newspaper and the journalists. The aptly named ‘Pain and Anguish’ develops some rumbling discontent behind the repeating piano figure, setting up the electronic distortion of the following ‘Night Mass’.

At just over half an hour, Spotlight flies past, the guitar and piano ostinati propelling the action with a calm but intense focus. As I write this, it almost feels like I’m typing along with the pianist on our respective keyboards. Spotlight does not quite match the excellence of some of Shore’s past dramas (such as Silence of the Lambs, Doubt, and The Departed), but it does yield a pleasant listening experience that, while hardly “entertaining,” pushes the right buttons at the right time. If you enjoy Shore’s other small-scale work, you will enjoy this, and vice versa. You can purchase Spotlight on Amazon or iTunes, here