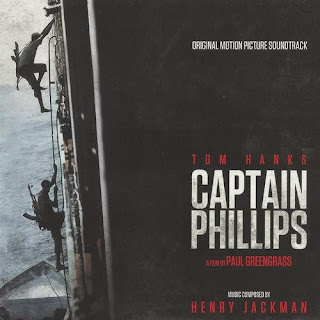 Captain Phillips is the new film from Paul Greengrass, director of movies such as The Bourne Supremacy and Ultimatum, Green Zone and United 93. The film is about a piracy situation occurring onboard a large American container ship, and it has been receiving large amounts of critical acclaim. The film is set to contain high octane intensity and pressure ridden scenes, and this definitely has me excited for the score, which is composed by Henry Jackman, who has done some great work over the past couple of years, with Wreck-It Ralph and X-Men: First Class ranking among his finest. Let's see how this stacks up compared to some of his previous scores!

Choose Your Crew starts us off, with some synth and orchestral, mixed together. It's a very diverse sounding opening piece, and it sets an obvious tone. It's not a dark, but it's definitely setting the mood as treacherous. It finishes quickly. Maersk Alabama begins where Choose Your Crew finishes off, and we hear a lighter tone than the previous piece. Strings are humming away in the background to good effect. Jackman is not sticking to conventional music, providing us with something which is very interesting to listen to. A basic riff is in place, and the piece picks up in intensity, before dropping back down. The piece finishes off with a lighter mood. This Is Not A Drill is up next, our largest piece, and we start with some basic synths. From the onset, strings are to obviously become a big part in Jackman's score. Foreign instruments are heard, before a noise, a vibration like a helicopter rotors are heard. The main theme of the piece kicks in, and a lot starts happening. Jackson is experimenting with a lot of noises and instruments, and works very well in this piece. It's an interesting piece, and it has a lot of good intensity and speed spread throughout. Definitely a standout so far.

We move on to Second Attack. It sounds almost quirky to begin with. The score so far sounds very culturally diverse. When a bass and some synth kicks in, we are led onto a wonderful drum solo. Strings join in, and we have a very powerful piece! Some strange sounds are heard in the background, such as hammering on something like a plastic bottle. The piece is full of interesting sounds, and you should be captivated by the amount of quality sets Jackson pours into this 4:54 minute piece. I'm The Captain Now is our next piece, and it begins softer than our previous piece. I can honestly say that I have no idea whether Jackson is using synths or orchestral instruments. One thing is clear, the intensity is going to pick up very soon. The beat is infectious, but the piece falls flat, with nothing much going on. The final half a minute tries something different, but has no time to do much. Do We Have A Deal Now starts with a soft beat. The background riff is actually quite interesting, I noticed. The percussion kicks in, and intensity and volume builds to a very climactic point, before the piece settles down. We have one more build up before the end of the piece.

Entering The Lifeboat starts fast paced and doesn't settle down. Jackson's beats are all incredibly infectious and catchy, which really keeps you involved in this score. Violin hammers away towards the end to great effect, before we stop, and piano takes place for a short while. The piece ends with nothing much to offer, unfortunately. USS Bainbridge is our next piece, which starts building, before a wonderful rhythm and beat takes hold. More conventional instruments are used within this piece, and they create a wonderful tone. A continuous rhythm later on does seem to ruin the piece, unfortunately, as it is boring and uninteresting.

End This Peacefully starts off with a soft theme, before a strong beat and rhythm begin. Strings such as violins are used incredibly well throughout the piece, and they create a very overwhelming scene. End This Peacefully feels like it has so much to offer us, but it doesn't deliver in it's short 2:44 running time. Failed Attempt is one of the shortest pieces on the score, but it has a lot to offer in the way of smooth rhythm, something that has been missing in the whole score so far. It finishes far too quickly. Two In The Water is up next and it begins with a big bang! It sets the whole tone, and the music keeps a fast pace. Some of the foreign sounds here are really interesting, and work very well with the speed the music sets. The rhythm is very catchy and intense, and shows off Jackson's experimental nature once again! The piece offers a powerful riff towards the end to finish us off on a bang. Seals Inbound starts with a good violin set, but that's honestly all I have to say about it, as it finishes at a tiny 0:24 seconds. It's honestly not even worth listening to that small insert.

Negotiation goes back to simple orchestral riffs to begin with, to great effect. Violins once again, are a stand out in this piece. The 1:23 running time is too short, unfortunately, so I don't get a real good taste. Initiate The Tow has a powerful rhythm to begin with, that builds slowly. The piece ends quite anticlimactically, which is quite disappointing. High-Speed Maneuvers starts with a wonderful percussion beat, and a great intensity. I had to turn the volume up, as it really adds to the piece! This is the piece that a lot of the intensity that so many other pieces didn't have lies. 2:04 is a good running time for a piece such as this. Our final piece, Safe Now starts very simple, with a piano and some basic riffs in the background. It's actually quite effective, the piano. The piece doesn't attempt to do much more than it needs to, and this adds so much more emotion and power to the piece. The strings are so delicate and beautiful, it's hard to fault. What a wonderful way to end!

Conclusion:
The score to Captain Phillips starts off with some exceptionally good pieces, before losing quite a lot of points to boring and uninteresting rhythms and beats. Thankfully, some intensity and emotion is recaptured towards the end, with the final piece really captivating. Jackson is not afraid to experiment, and this is not a bad thing, not in the slightest. But some of these pieces felt much too overwhelming, with an abundance of sounds being thrown at you. Despite these faults, Captain Phillips should definitely be listened to, as it provides some intoxicating beats and some beautiful violin solos. Possibly not Jackson's best score, but one of his more memorable.

Highlights:
This Is Not A Drill
Second Attack*
Two In The Water
High Speed Maneuvers
Safe Now*

Want to see what I'm listening to? Follow me on Spotify at Callum Hofler!
Posted by TheHof125 at 16:23