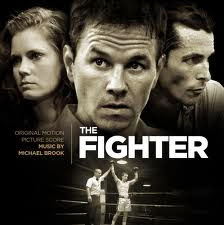 Hello! After listening to The Fighter score, by Michael Brook, I felt the overwhelming urge to write about it! Note to all, this is not a really indepth review, it's simply a highlights and general consensus kind of thing.

The Fighter is done by Michael Brook. The film is about Micky Ward, a boxer, and a small part of his life. It stars Mark Wahlberg, Christian Bale and Amy Adams, and it has to be said that this is one of my favourite films of all time. It's hearty, gut wrenching and gritty and it'll be stuck in your head for days on end! The score, on the other hand, is not so memorable. There are very few highlights throughout the score, and Michael Brook doesn't try to do anything extraordinary. It reminds me, at parts, of the Prisoners score, done by Johann Johannsson, one of my least favourite scores of the year. It's bleak, dull and uninteresting, to my utter disappointment. Brook doesn't try much, and it makes the score quite unmemorable. This score is great for ambient noise, or just some basic music in the background whilst you're doing something else. You shouldn't pay too much attention to this score, or you'll just enrage yourself!

Brook tries to create a very atmospheric score, one that reflects the time period in which the film takes place in. Despite his ambitions, the score falls flat multiple times. There are a few highlights, when the music turns quirky or develops into a proper rhythm, yet these still seem almost irritating. It's a slightly jazzy score, I'll give Brook that, but I'd say even that's a stretch. The score isn't really worthy of a listen, to be honest.

Conclusion:
Why did I do this review? Simply so I could beat this score down, because it had irritated me for 26 minutes too long! The music does work well with the film, I'll admit this, but in it's own context, it should be avoided at all costs. Brook doesn't bring anything fresh or vibrant to the table, and the score doesn't keep your interest almost the entire way through. The bottom line is that this is a poor score and achieves next to nothing.

There will be more of these in the future, to all those interested!