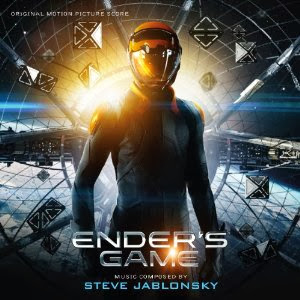 Hello, once again! I'm back with another score review, this time for the Gavin Hood space epic Ender's Game! The film is about our main protagonist Ender, an extremely intelligent teenager, being chosen as a commander in a war against another race. The film stars Asa Butterfield, Harrison Ford and Hailee Steinfeld. The score for the film is done by Steve Jablonsky, who has done scores for other films such as Transformers: Revenge Of The Fallen, Battleship and A Nightmare On Elm Street (2010). I will admit, that list of scores and films is not the best, but lets see if Jablonsky can win over any fans with this score!

Ender's War is our starting piece, and it sets the tone. Fast paced, haunting and quite epic. Jablonsky starts us off with one hell of a piece! The whole brass feels so heavy and powerful, before an almost emotional theme kicks us in the gut! It's a very complex piece, and it will certainly have you tapping along with your foot, I guarantee that! Stay Down builds for a longer period than it's predecessor, and doesn't have a complete feeling to it, that is, until the 0:40 second mark. The piece doesn't do much for me, which is disappointing after such a great start! Battle School has the same epic and rounded feeling to it that our first piece had. It's has quite an intoxicating beat. Move It Launchies starts a little faster than some of our previous pieces, and it has a ticking sound playing off in the background. Adds a little intensity to the whole piece, in my opinion. The piece only lasts for 0:57 seconds, so it doesn't have anything too amazing, but it's very well done. The Battle Room has some beautiful flow to it. It's smooth and very saddening. It has an almost Game Of Thrones theme to it, around mid way through, which I have to admit I love! It's climax is fairly affecting. Great piece!

Mind Game Part 1 is a simple yet touching piece. It's a little delicate, that is until the drums and the synth decide to make themselves known. It goes from pleasant to deep and dangerous in about 2 seconds, which amuses me quite a bit! Mind games indeed! Salamander Battle has the same infectious kind of beat we've heard numerous times throughout the score so far. It's a very heroic and powerful piece, and Jablonsky mixes it up with a lot of emphasis on the strings and drums. The piece has a constant sense of direction, and Jablonsky knows where he wants to go with the piece, and it leads up to a wonderful climax for a lot of satisfaction! Mind Game Part 2 feels much the same as it's first counterpart. It doesn't appear to be going anywhere, to begin with at least. It teases you in a multiple forms, and it's almost a little irritating in that sense. When the major beat towards the end kicks in, which might I add is pretty bloody awesome, I feel a lot less overpowered than our original major beat we had in the first part. Solid piece.

Dragon Army sounds a little Hans Zimmerish, to be honest. I guess Jablonsky must have taken a lot of inspiration from Zimmer, based on the first half or so of this score. The piece speeds up towards the end, and once again, I have to admire the fact that Jablonsky always seems to have control. He knows when to speed up and when to break. He's a great composer, in that sense. Dragons Win feels much the same as Dragon Army did, except the piece takes a lot more focus on pace and brass. Honestly, some of the brass sets are absolutely incredible, some of the best of the year! The piece varies it up in terms of speed and volume, something which it does very well. Bonzo doesn't do much for the majority of the piece, before having a small synth riff. It's quite uninteresting. Ender Quits is our longest piece in the score, sitting at 6:23. It's slow and enveloping over the first 2 and a half minutes, before developing a proper melody, which is haunting and saddening, all at the same time. Piano takes over for a short stint, and it provides a little more depth to the sound. Our next set is quite powerful, and really relies on that piano and strings. The piece doesn't provide much more after this though, so we move on!

Mazer Rackham has a much more interesting melody to it. Almost epic, I'd say, but it lacks a little power. There are many components to this piece, and they form together quite nicely. Enemy Planet is darker than some of our previous pieces. It sounds a little like something from Gravity, by Steven Price. That is until it slows down and lets itself build. The ticking sound kicks in once again, and brings upon a rhythm which feels a little underwhelming to a certain degree. It's awesome, nonetheless, and I approve of this piece! Command School is faster and a more intense than most of our previous entries into the score. The Zimmer inspiration is very obvious here, and that is certainly not a bad thing! The percussion stays very vital throughout the piece. Some heavy synth hits towards the end, and surprisingly, I enjoyed it. I'm not generally a fan of it, but it works well here! Command School is one of the best pieces as of yet. Graduation Day seems to sound a little darker than it's name would suggest. Jablonsky pumps as much epic into the 1:29 minute piece as physically possible, but the running time of the track is a little short for my liking. Final Test is one of our longer pieces in the score, clocking in at 6:03, and it's a lot more energetic and intense than our previous long and haunting piece, Ender Quits. It has a certain building sensation to it, one that is well appreciated. It leaves you anticipating something the entire way through. It has so many twists and turns, which never deviate from the basic beat and melody that has been set the whole way through, so you know there is a point to all of this. The problem is, the ending is a little anticlimactic. It's not a deal breaker, the whole piece being intense and pretty bloody awesome, but it's certainly an annoyance.

Game Over certainly feels like a send off piece, but it's ending suggest somewhat otherwise. The whole piece doesn't seem to have much direction, which disappoints me. The Way We Win Matters is a slow and deep piece. One of the most noticeable and impressive things showcased here are the vocals. There is some real talent! It's about halfway into the piece before things start to get fairly interesting. The emphasis on deep and dark becomes a little less obvious. It lightens the tone up to deliver a very sad, almost heartbreaking set around the final 3rd of the piece. Before letting the piece become a little more jagged and dangerous. Ender's Promise is exceptionally slow and sombre to begin with. A sudden jump occurs which literally sent shivers down my spine! It certainly never really slows down from that point, to my approval. The theme is quite prominent towards the end of the piece, before finishing off with a heroic and uplifting set. Commander is a slow piece to begin with, before the strings take hold. The strings and percussion work very well with each other to create a lighter atmosphere. The piece then rockets off, with a final melody. It's breathtaking, actually. Jablonsky has certainly succeeded in the marvel worthy category.

Conclusion:
Steve Jablonsky has created one of the best score I've heard this year, a certain score of the year contender. It has a wonderful array of beautiful and light cues, mixed with dark and powerful pieces. There is never really a point in which the score gets dull or boring, and loses your attention. And even if it does, Jablonsky manages to pick your attention back up with power and volume, neither overused though. It's a consistently awesome score, and it's certainly a must listen to!