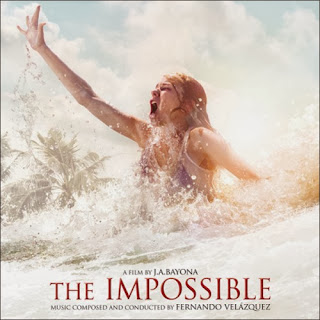 Film Synopsis: The story of a tourist family in Thailand caught in the destruction and chaotic aftermath of the 2004 Indian Ocean tsunami.


Hi! I'm back with another little spotlight for a score that I only recently heard. The Impossible is a film that I saw earlier this year, and I have to say, it is one of the most heartbreaking films I've ever seen. It's emotionally wrenching, and multiple viewings are almost impossible. Fernando Velázquez has the job of creating a touching and dramatic score, and I have to say, he does so to almost perfection! I just couldn't resist sharing this brilliant score with you!

The whole score is incredibly minimal. Velázquez doesn't overdo any of the pieces, and this works to great effect. Emotional music doesn't require heavy synth (Take note Johann Johannson) or an entire orchestra. Grab a piano and you can create something which brings you to tears. That's the message I get from this score! The whole score is so delicate and original, it's almost impossible to compare this to any other work I've heard as of recently. The way he uses vocals and strings is so aggressive in a subtle way. The way the piano cuts through pieces full of loud and obnoxious instruments, almost as if to say "Hey, I'm here, and I don't need to power my way through all the other instruments to reduce you to an emotional state." It all works so well!

The score is only 52 minutes long, so it's obvious that Velázquez didn't set out to create a score that covers every aspect of the film. He saw the essentials, and he provided them. And he does so with near perfection. Every key aspect within the film is seen to, and the majority are seen to in spectacular fashion. He manages to create a flowing and smooth score, despite moments at which he has to make his way from a light, touching and emotional piano solo, to a dark and threatening cello showcase. How he does this with a close to perfection hit rate is beyond me!

I often hunger for speed and volume from a score. Maybe it's because I'm a young 13 year old and I get bored easily, or maybe it's just how I am, how I was born. Whatever the cause, I didn't hunger for anything of the sorts throughout this score. It kept slow and touching for the vast majority of play, minimal volume and pace changes occurring throughout it's running time. Despite this, I wanted more of the quiet and small piano solos, the violin ensemble sets where the music would turn dark and haunting. It takes a strong composer to evoke these kinds of feelings out of myself, someone who has their preferences in music and generally sticks to them. Velázquez is indeed a strong composer.

Conclusion:
The score to The Impossible will rush by, in a sense. This isn't just because the score is a short one. It's the fact that it almost makes you feel like time's stopping. It's just you and the score, and that doesn't downgrade the score to a grind. Velázquez has created something emotional, touching, edgy, dark and beautiful. I want to write more about this score, I really do! But some scores are just so near perfect, that it becomes difficult to pinpoint the best parts, the extraordinary factors. It's more of a personal journey, something that you have to hear yourself to get an idea of the power and and raw emotion this contains. From start to end, your breath will be taken away!

Highlights:
The Impossible Main Titles*
The Best Holiday Season Ever*
Kem Kang Noi*
I Will Bring Your "Pappa" Here
Mom, Guess What I Just Saw Outside?*
Let's Go, No Need To Wait
I Have A Family Too*
He Looked So Happy*
The Impossible End Titles*