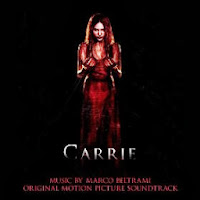 Hello once again! Marco Beltrami has been on quite a run this year! I loved his scores for The Wolverine and Warm Bodies, but dismissed his World War Z score, unfortunately. And whilst I may not have had a chance to listen to his Good Day To Die Hard score, I've heard wonderful things about it! This score is for the film Carrie, directed by Kimberly Peirce, and stars Chloe Moretz and Julianne Moore. The film is a remake of the 1976 classic, and it follows Carrie, a young teenager who is bullied, and finds out she has telekinetic powers. Beltrami has a big task, so lets see how he handles it!

Carrie Main Theme is our starting piece, and it sets the mood perfectly! The theme is very haunting and powerful. The piano and violin work wonderfully together. Beltrami starts us off on a strong note, before settling down with The Birth Of Carrie. The piece sounds like a classic horror film piece, and it's quite nostalgic to listen to! The brass really shines through in this piece, as does the stringed instruments. After Beltrami's World War Z score, it feels as if he's taken a step back from the synth and heavy metal, and gone for something much more contemporary, and it sounds wonderful! It's not exactly original, but it's very haunting and it sets the scene perfectly for a horror score. When Periods Attack is more of a step backwards in intensity, and relies on it's slow piano to begin with, before letting the woodwinds and strings take it from there. Something like a scream suddenly rings out, and it's brilliant on Beltrami's part! These first few pieces really set you up for what's to come, and I'm fully invested in this score!

Carrie On starts off with some slow building music, before picking itself back up with some really creepy music, and ending with an amusing rhythm. The next piece, Headbanger, has some moments which seem to reflect jump scares, and the constant riffs are less interesting than previous pieces. Some interesting noises play in and around the piece, but we finish a little too quickly for my liking, before jumping into Go To Your Closet. It starts off where our previous piece finished, and has some really powerful and dark moments, before settling into it's chilling beat and rhythm. It's a wonderful horror piece, and it builds up very well. Something I really noticed was how well the brass is used, in it's small parts. And that goes toe in toe with the vocals. All spectacular and haunting! Love You Too, Mum has too short a running time, but we are offered some slow piano, and it is a well placed piece. Mind Over Matter has a wintery feel towards it, and takes it back to more modern music. The guitar within the piece is very well done, and it gives it the innocent feeling that a lot of old horror movies contain. This piece reminds me that I'm listening to Marco Beltrami, simply because of the array of sounds and riffs used. It doesn't sound contemporary, which is what I'm used to after listening to a few of this man's scores. We lose a little creepiness towards the end, to my disappointment, but that doesn't take away from the wonderful music that we got to listen to. Beltrami has me won over for the moment!

Sue Gets An Idea starts with some soft, almost delicate music. It's nice to listen to, but not necessarily creepy. Some piano changes this around, and bring the haunting feeling alive once again. The drums and percussion in general add a sense of urgency to the whole piece, and it works very well with the theme of the score. We get a nice and interesting riff before settling down for possibly the third time. Piano ends us, and we are thrown into Shopping, which starts slow. Beltrami is losing the classic horror feel he got so right around the start point, which has me worrying slightly. The piece sounds a little too pleasant, for my liking. I know what is to come, the whole mass murder scene, but it won't have the subtle power of the start. Shopping finishes, with not too much notice, and Levitated Mass begins, with slightly more grunt. It has an overwhelming feel to it, as if the whole piece is grabbing you. The build up really adds to this, before delivering a killer punch! I'm genuinely creeped out, once again. We have been brought back in, I can say for sure. Once again, that almost innocent feeling to the piece kicks in, before the piece finishes. Preparing For Prom has a build up feel to it. It's soft, but it hints that you're in for something interesting. I almost feel slightly cheated, that being that I already know what's going to happen. The strings and violin work very well together, and the piece finishes.

Trapped In The Closet starts with a creepy piano note, before the main riff begins. The orchestral feel has kicked in, and you can almost feel the strings strumming away with intensity. We end quickly, and we get the piece which, to be honest, is the most concerning of them all, Blood Bath. From the get go, we know that this is the piece, the piece in which Carrie starts throwing people about. The percussion and strings work intensely, and they create a very powerful scene. Blood Bath seems to be the set up for our next piece, as it ends at a short 1:11. Beltrami pulled off one of the most important pieces. Now, for the continuation, Kill Em' All, which starts with a incredibly creeping violin set. It gave me the chills. The piece feels, in a sense, slightly crazy. You needn't fear, this is a wonderful thing for a blood bath scene! Kill Em' All captures the creepy mood of the entire score so far perfectly, and has to be one of my favourite pieces from the score!

Driving Her Crazy starts a little too powerful and modern. It almost sounds as if it's a rock piece, to begin with. It certainly feels crazy, as the name suggests, but it feels as if it almost doesn't belong in this specific score. There are some small moments in which the piece captures the haunting and terrifying feeling the rest of the score managed so well, but these are few and far between, unfortunately. The brass does play, once again, a wonderful part in making this piece feel a lot older and grander, which is something that suits this score well. The ending to this piece is incredibly subtle and chilling, which is another upside to this slightly disappointing piece. Heading Home is a return to the cold feeling that I want more of. The piece has some comforting and powerful riffs, but it doesn't seem to reach any heights. Mommie Dearest starts dark, and Beltrami really showcases his vocal talent off in this beautiful piece. It's uses a sorrowing tone for a few minutes, before returning to the fast and terrifying pace that previous pieces had. When the vocals pick up once again, they're much more sinister sounding, to my utter delight. One of the riffs is repeated once too many times, before the piece finishes with a powerful bang!

House Crumbles quickly fills you with the feeling of jeopardy and danger, and the vocals do well to emphasise this point. The piece is quite saddening, for some strange reason. I don't know what I'm feeling exactly! The piece ends with a powerful theme, opposite to the creepiness and subtleness of the first few pieces. It's quite an interesting contrast to look back on. You certainly feel the score coming to an end, with an almost heroic theme towards the end of the piece. The finale is soft but sure. Burn In Hell finishes us off with a harrowing piano solo that lasts a short 1:08. We hear creepiness, power and intensity, all in one piece, which feels slightly too short, unfortunately. The score ends, and I feel a little delight.

Marco Beltrami's Carrie a wonderful score. One that I think is slightly underrated, in my honest opinion. It sounds very much like a classic horror film score, much for the better! Beltrami is one of the composers who does best at experimenting, and creates wonderful pieces from it. This score shows off those traits well, and my faith in Beltrami has been restored, after the dull and uninteresting World War Z score. To be honest, you'll either hate this score, or, like me, you'll really dig it. One thing is for sure, you should certainly check this one out!

Want to see what I'm listening to? Follow me on Spotify at Callum Hofler!
Posted by TheHof125 at 03:20