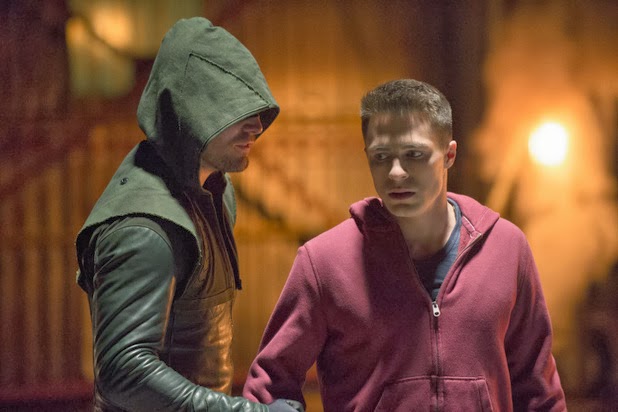 Unknown to pretty much all my followers, I'm a huge television fan! I love Game of Thrones, Elementary, Breaking Bad and surprisingly Arrow! Season 1 started off poorly, but soon enough improved to a fantastic degree, and captured me with the best season finale of last year! Now, we're into season 2... it's a mixed season at best. Sure, most of the character introductions have been really good, and Stephen Amell has still kept the great performances rolling in... but with Laurel's storyline being an incredibly dull filler all season, I have to downgrade most episodes. Thankfully, last episode had an absolutely awesome ending, with Arrow agreeing to help train Roy, and Deathstroke FINALLY making an appearance! This episode though... well, let's see how it fairs!

To start with, Bronze Tiger is back, played by Michael Jai White. He had a short stint on the show a few episodes back, and he got busted and is being held up in prison. He busts himself out, and partakes in fighting Arrow a little within this episode. The fights between himself and Arrow feel incredibly choreographed here, unfortunately, which makes for some dull moments. Michael Jai White does fine in his role, which is all fine and dandy. His lines, though, feel incredibly cliched and corny, so points off!

The whole plot within this episode is that an unnamed arms merchant breaks Bronze Tiger out of prison to steal a secret prototype of the earthquake machine that lies within Malcolm Merlyn's home. Ultimately, this is just an episode that is meant to advance Roy Harper's character, as well as introduce the Suicide Squad, a name most certainly known to comic book fans. The whole main plot line feels incredibly forced, and very thrown together. They reveal that there has been ANOTHER earthquake machine nestled in Starling; something that sounds completely out of the blue. No lead up, nothing! Then, it's destroyed at the end. So much for that devastating piece of machinery! The story for this episode is just really pathetic and bad, in comparison to the previous episodes endeavors.

The whole Roy being trained by Arrow also feels quite staged. From the setting, to the way Arrow stands and addresses Roy, it all makes me not believe this as a real training sequence. That's really unfortunate, as the thing I was most looking forward to seeing this episode was some badass Roy on Arrow action, or some pretty straightforward training sequences. We certainly didn't get that. They also have to continually force the idea that Roy is angry at everything down our throats, and that makes the training sequences incredibly repetitive. Every time we see Arrow training him, it's always "I can't do it! I'm going to get angry, break something, and tell Arrow that this isn't working!" That happens 2-4 times this episode, and it's infuriating!

There were some decent angles tonight, clouded within the crap. Moira is now running for the mayor office, which is an angle which I think is really good! Sebastian Blood is now going to have to eliminate Moira, which will have Oliver angry, whether she's killed or not, and now with Deathstroke in the fray, we may finally have an Arrow on Deathstroke fight! And the island flashbacks was interesting tonight. Slade wanted to blow up Ivo's ship with the missile launcher that is still on the island, but Oliver convinced him not to, and instead tells him that they are to seize control of the ship! So that's a lot of build up for the next few episodes, all of which I'm anxiously awaiting!

And we finally reach Laurel... ugh, it's worse than ever here! Her father tries to help her again, this time by fooling her into walking into an AA meeting. She flips her shit, and establishes her belief; that she's been through worse than the people in the meeting. This absolutely infuriates me, as it's meant to, so props to the writing team for that move. Laurel then spirals out of control afterwards, and goes to Thea's bar and proceeds to get drunk. Katie Cassidy's acting ability is fairly limited, and she should certainly not be given another opportunity to act drunk within this show. It's just embarrassing! Fortunately, we get to see some real character development (or a hint of it) at the end of the episode, when she falls to the ground back at her apartment. She looks up and sees her sister coming towards her, before we fade to black. What does it mean? Is Laurel finally turning into Canary? We'll have to wait to find out! Nonetheless, the Laurel angle tonight wasn't very good at all! Despite some decent moments, Laurel's scenes feel forced and awkward.

Conclusion:
This episode was pretty bad. Certainly a let down after the big cliff hanger left to us by the last episode. Tremors had a forced centre plot line, a pretty repetitive and stupid few training sequences, and more Laurel crap, yet it did fortunately have some really important character development, and a fairly good finale. Oliver does reveal himself at the end to Roy, and lets him join the team, so that's exciting! And the Suicide Squad angle seems in full force, so I can't wait! This episode was pretty shocking; a certain down point of the season.