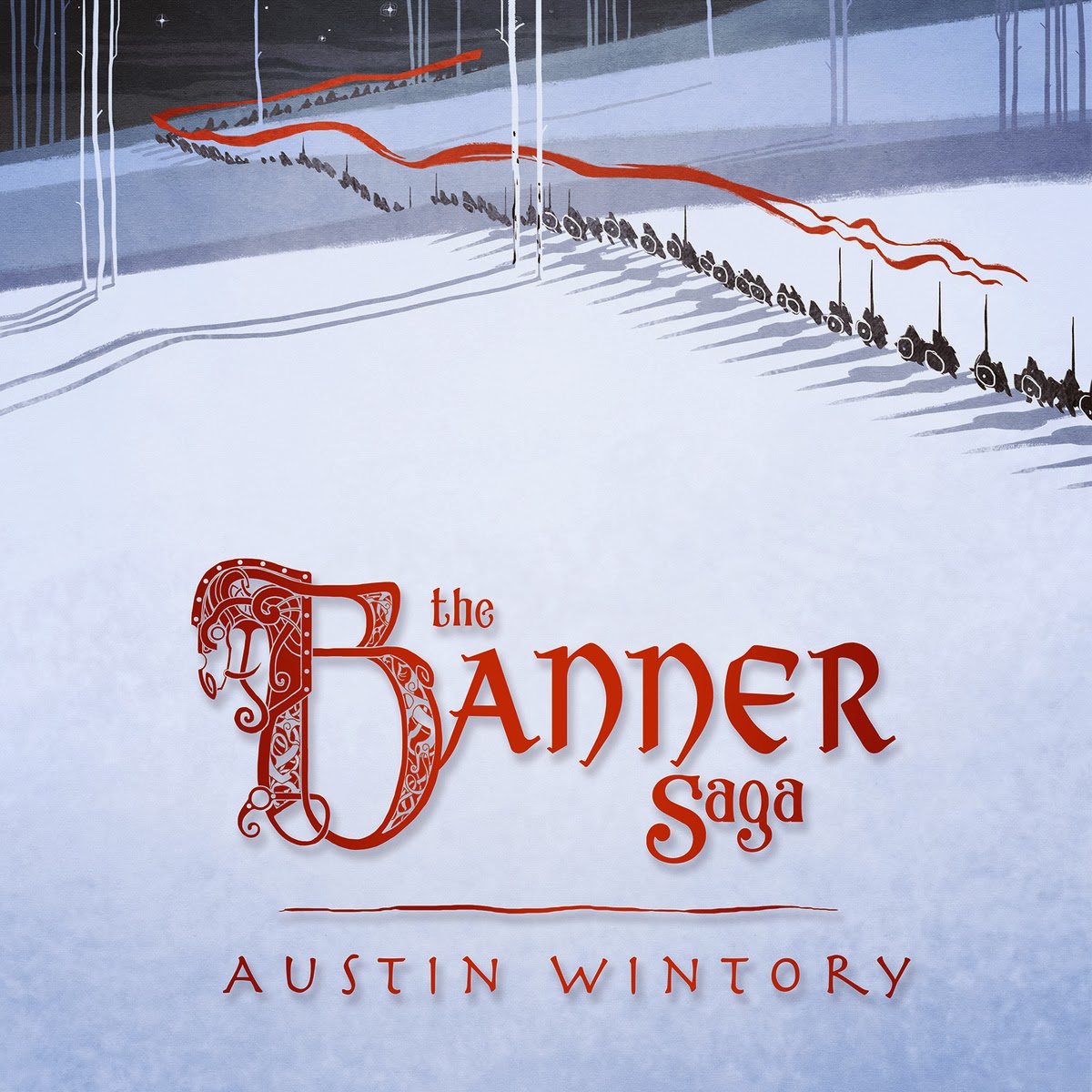 Hello all! It's time for my first video game score review of 2014, and what a way to celebrate that fact! We have an Austin Wintory score in the house everyone! Austin Wintory is one of, if not my favourite composer of all time. He's delicate, witty and very simplistic. Monaco: What's Yours Is Mine has to be the perfect example of all this, as he uses a piano for 95% of the score, and still kept me involved, entertained the entire way through. Not easy, with just a piano! He returns here, with a score to another video game; this time one known as The Banner Saga. Let's jump into it!

Wintory will surely be criticised for this album, for the large, constant attempt at making this sound as much like a Viking or Nordic score as possible. I personally find it a very good attempt. It employs a lot of culturally diverse instruments and vocals to reach these heights. Wintory indulges in percussion here, with a lot of emphasis on timpani, and other drums. Various bells and chimes are also slotted in, here and there, to give the score an Eastern vibe. Along with these are an extreme dose of vocals and heavy strings, both which give a certain edge to the music. The vocals are quite strong, as well. They never just sit in the background and add to the piece in small works. They literally control quite a few of the pieces, and change the tone up accordingly. I'm still wondering on whether or not I enjoy these vocal solos. They're incredibly loud,  low and ultimately, quite central to the score. But the problem lies within how often they are incorporated. Wintory indulges slightly too much in vocal heaven and maybe over does it a little, unfortunately.

That said, the orchestral pieces here are very well done, as I've come to expect from Wintory! He certainly doesn't allow for a straightforward plot, and attempts to create multiple interesting yet simplistic themes. Ultimately, Wintory has always had a soft spot for simplistic themes. His scores are, as a whole, generally quite complex and intricate. Monaco had a lot going on within each piece, despite it's use of only a single piano. Yet like Monaco, the theme is catchy and minimalist, allowing you to hum it accordingly. For a game score, this is certainly vital, and Wintory knocks it on the head. The multiple themes heard within the score are all relatively easy to hum and get stuck in your head, and for that, I applaud Wintory. There is one theme that I believe was overworked, and that is found within the piece Cut With A Keen-Edged Sword. I found it a little repetitive and dull unfortunately.

This score reminds me quite heavily of The Lord of The Rings scores, by Howard Shore, surprisingly. The piece, Little Did They Sleep is a great example of this. Maybe it's the use of flutes, to create that almost floating feeling, or the wonderful, heavy brass which starts the piece off, which is almost a grandeur signal for battle!  Whatever it may truly be, I don't know exactly. I guess it's all these puzzle pieces put together, that really allow for this distinct resemblance between the two scores. Ultimately, the Nordic sound opens itself up to interpretation and resemblance to a whole bunch of scores, and LOTR is one of those old fantasy scores which could certainly slot into this score, without a sudden shift in any tone or theme. Garnering a comparison to Lord of The Rings is no mean feat, but Wintory has certainly achieved something of the sorts here.

I thought special mention was to go out to the longest and best piece on the score card, Of Our Bones, The Hills. It's basically a suite of awesome, Nordic themed music, that had me from the word go. I'm generally not a guy who enjoys longer music; 10 minute music in this case. But, in this case, I really did! It was incredibly well composed, fun, and had some very nice ostinatos which I found very engrossing! Wintory is one of the only people on the planet that can really make an ostinato work, along with James Horner, Hans Zimmer and a few various others. I even enjoyed a vocal solo towards the end, to my utter surprise! It's a very carefully done piece that I thoroughly enjoyed!

Conclusion:
The Banner Saga is one of Wintory's better scores. It's incredibly well composed, establishes the tone and theme perfectly, and is an all round enjoyable listening experience. It does, unfortunately, repeat itself a little too often, and the vocals seem to be overindulged in. Despite these faults, there are some incredibly awesome pieces here which totally make up for these faults. Of Our Bones, The Hills and Onward are both going into my Favourites playlist, which is to say that they are both of extreme quality. This is one to certainly check out, whether you're a Wintory fan like myself or not.

Thanks for reading! Some links to various accounts below: