Check it out... if you're a fan of the derivative, highly unoriginal and uncreative synthetics and percussion that plague the most generic and distasteful of modern action scores, for a good majority of Advanced Warfare's running time is dedicated to producing such 'music'

Skip it... if you were at all anticipating the collaboration between industry giant Harry Gregson-Williams and the two men behind the trailer music company Audiomachine, for your anticipation will only render your disappointment greater 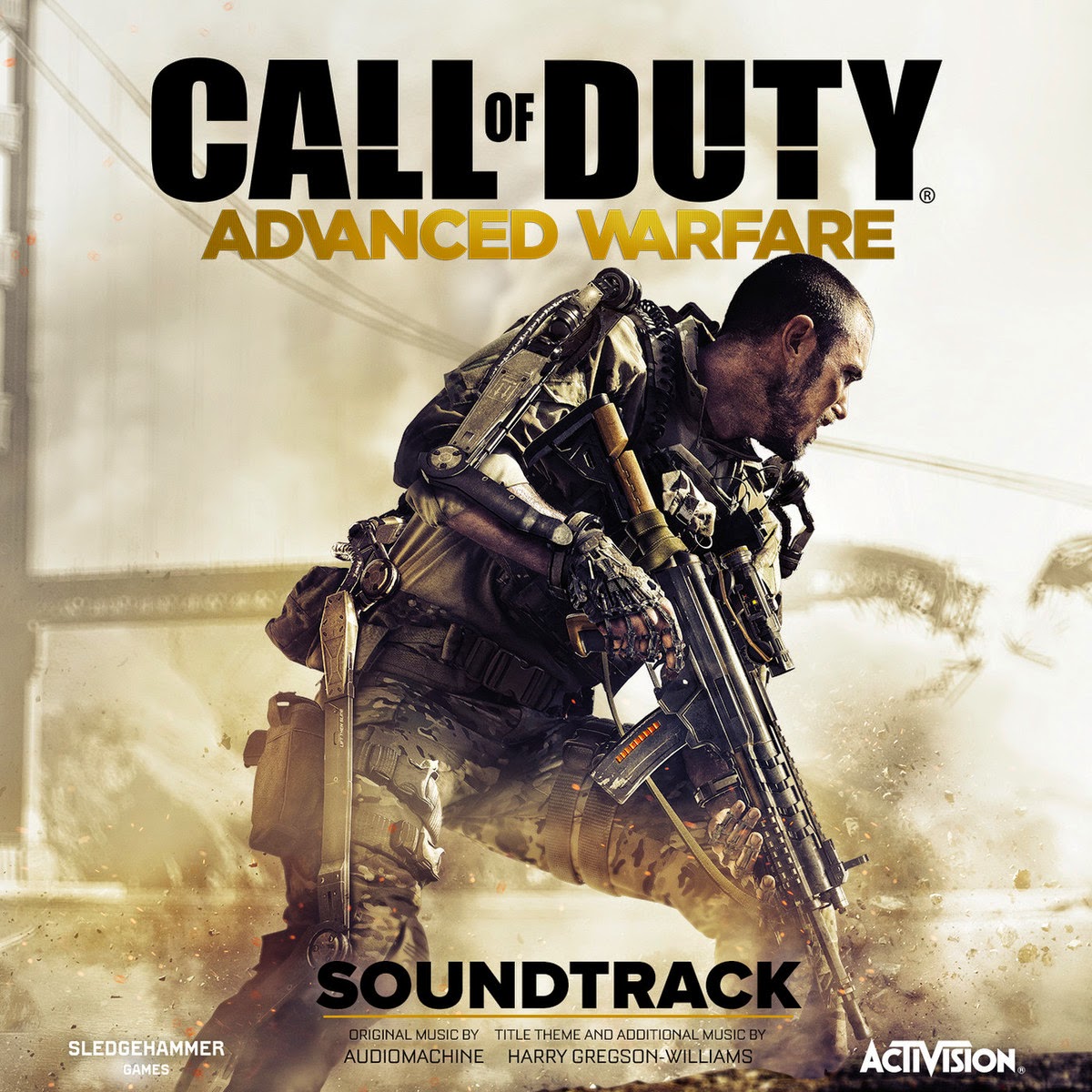 "Unfortunately for one who is either a fan of Audiomachine or the Call of Duty franchise in terms of its music, what you will find here is highly disappointing and lacking, even from multiple listens."

Considered one of the most over-hyped, stale and highly unsatisfying game franchises in all of history by numerous individuals, whilst also being acclaimed as a revolutionary piece of entertainment by its apologists, Call of Duty is a series which consistently divides gamers of all race, culture and creed; in fact, in that sense, it may very well be one of the most inclusive game franchises currently circulating and receiving attention. According to the trustworthy Wikipedia page, the latest admission into this series, Call of Duty: Advanced Warfare, is the 14th iteration for the Call of Duty brand. This chapter supposedly differentiates itself from the prior installments thanks to new, improved and original gaming features like exo-skeletons; a key component utilized in the 2013 Neill Blomkamp picture Elysium; celebrity motion capture performances; one of the defining features from last year's game Beyond: Two Souls; and... ok, this game isn't overtly creative nor inventive. Nevertheless, it appears as if Ubisoft and Activision are somewhat trying to push the franchise in a direction that doesn't feel entirely repetitive, so a stilted congratulations is due. In terms of the compositional prowess of this series (in regards to its music), Call of Duty has always seemed to have a blend of uninspired and tiresome synthetics alongside some relatively kick-ass orchestral action bravado, which whilst being entirely predictable, is nevertheless a whole heap of fun. The composers in charge of Advanced Warfare's score include Paul Dinletir, Kevin Rix and the highly lauded Harry Gregson-Williams. After the rather enjoyable Call of Duty: Ghosts score from David Buckley, one should expect some relatively impressive work from the men behind Audiomachine, and the composer who delivered us the original two Narnia scores.

Unfortunately for one who is either a fan of Audiomachine or the Call of Duty franchise in terms of its music, what you will find here is highly disappointing and lacking, even from multiple listens. Despite Harry-Gregson William's best efforts, some of them genuinely impressive, Call of Duty: Advanced Warfare is perhaps one of the most grating and vile video game compositions of the year, producing few highlights and disappointing fans of Gregson-Williams and Audiomachine alike. There is little material to properly appreciate throughout the entirety of this bloated one hour and 16 minute long album (which could've very easily been shortened down to allow for a more coherent and enjoyable listening experience). Whatever your musical taste, I find it hard to believe that a single soul on this planet would consider the majority of the music on this release even passable, considering the circumstances. For the vast quantity of the running time, Advanced Warfare encompasses little more than what makes up some Call of Duty's more irritable inclusions; immensely irritating synthetics, mixed alongside overbearing percussion. There is often no progression to any of the 'music' they provide. It is just singular rhythm after singular rhythm, without rhyme or reason as to why any of it is being heard. From their initial offering, 'Draconian Dream', a cue which I somewhat enjoy, it is obvious that Audiomachine have been instructed to provide material which embraces the 'Advanced Warfare' component of the title, and deliver what many a casual gamer would consider 'futuristic' music; these including compositions which seems entirely artificial and devoid of thematic development, emotion or peril. Even the organic instrumentation is not blatantly so; light dabblings into strings sound metallic and lacking in biotic qualities, as is evident on the second and third offerings from Audiomachine, 'LZ Epsilon' and 'Swarm Down'.

And this is overtly disappointing primarily due to the fact that Audiomachine are very much capable of providing music which is both orchestral in nature, as well as highly enjoyable. Often, synthetics are not at all incorporated for Audiomachine's productions. So to see them reduced to using those techniques for this here release, techniques which they usually shun, is disappointing. Their material has moments of coherence and balance, moments which allow them to showcase their undoubtable capabilities and capacity for greatness; 'Draconian Dream' is a brutal but highly effective action cue; 'Chain Reaction' is a relatively decent, fast-paced percussion onslaught, with enough variation to keep you entertained throughout its duration; 'Xscape' is a passable action piece. Yet still, I'm straining to find anything from Audiomachine's material that is overtly good, these three cues being the result of numerous, ear-bursting listens. It is safe to assume that Audiomachine fans will certainly be disappointed by the lackluster compositions they have managed to provide for this distasteful production which served as the company's first venture into scoring; a disappointing start.

Fortunately, Harry Gregson-Williams' material saves Advanced Warfare from being a complete waste of time. Whilst you're trudging your way through the Audiomachine drivel that is on offer, Gregson-Williams' material constantly provides a little break for your poor ears, which are undoubtedly thumping due to the assault that they've been receiving throughout the vast majority of the album. A strong opening from Gregson-Williams in 'Advanced Soldier Overture' signals that greater things are forthcoming, the primary theme strong and gallant (never mind cliched, for at this point, it should be understandable that I'm grasping on to any and every fragment of enjoyable music), the instrumentation full of bravado, and despite its lack of subtlety (this is Call of Duty after all), one should be able to appreciate this relatively entertaining piece of music. Whilst not every subsequent contribution from Gregson-Williams is as impressive or satisfying as this opening effort, he certainly manages to reign in the album from going overtly synthetic, and produces some relatively enjoyable results along the way. 'Eulogy for a Friend', 'We Are Atlas' and 'No Soft Options' are some stirring examples of Gregson-Williams' ability to embrace strong, vivid action music, whether one is taking notice of the blatant lack of variety or not. It's enough to make at least parts of this album bearable, and that is highly appreciated.

Nevertheless, whether taking Gregson-Williams' efforts into account or not, it's not hard to see why this release has received little discussion since its release. It's a synthetic mess, vacant of anything remotely poignant or emotive. It's derivative, perpetually unoriginal and highly unenjoyable. Considering the prior out-puts into this franchise, Advanced Warfare is by far one of the more disappointing installments, and represents another down-point for this troubled series which has lacked the necessary compositional or emotional weight to properly be recognised as anything more than 'fun action music'. Except in this case, it can't even be considered such. When I originally saw that Harry Gregson-Williams would be collaborating alongside the men who are often considered the best trailer music company currently working, I was elated at the prospect, as were many others. "These men all have far greater compositional talent than either David Buckley or Jack Wall; how could this possibly go astray?" I asked myself. The answer is simple; very easily. Lacking diversity, thought or creativity, a select quantity of Gregson-Williams' contributions are the only thing that save Call of Duty: Advanced Warfare from getting a completely abysmal rating. You can purchase Call of Duty: Advanced Warfare on Amazon and iTunes, here and here.