Check it out... if you desire a synthetic score which possesses enough thematic composition, melodic writing and interesting concepts to provide a relatively challenging and difficult listen

Skip it... if you maintain a distaste for electronic instrumentation and the writing that it entails, or possess sensitive hearing which would not be so well suited to a score which embraces high pitches which prove immensely irritating at certain instances 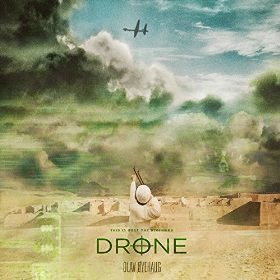 "Drone is a punishing listen, full of some absolutely infuriating music, mixed throughout brief moments of supposed coherence and intellectual work."

Directed by Norway-born Tonje Hessen Schei, the 2014 documentary Drone is a film that provides insight into the CIA covert Drone operation that is currently active, and supplies details in regards to how the machines are built and operated, as well as used within war and peacetime situations. Drone also reveals crucial details into the drone war currently in effect within Pakistan, and allows rare documentation not only on the effects of drone wars back here in first world countries, but on the effects of those living in the areas affected by the constant bombardment and harassment of drone assignments. Receiving little attention from the mainstream, it is feared that this well-made picture will fly under the nose of the vast majority of both the intended American audience, as well as audiences all over the world who may benefit from gaining a deeper understanding about the oft-times poorly handled drone operations that have been undertaken throughout the past decade and a half. Compositional duties for this harrowing and highly informative documentary have passed to composer Olav Oyehaug, who is known to few within the scoring community. His experience in the scoring sector of film-making is limited solely to documentaries and short films, sometimes composing for pictures which fit both of these descriptions. Drone is his thirteenth score, and his first working alongside this director, Schei.

What is made abundantly clear from the onset of listening to Drone is that Oyehaug is quite obviously infatuated with synthetics, and is persistent in his use of them. Often more populous than the organic instrumentation provided, Oyehaug's use of electronic elements to form a soundscape that is relatively neutral and lacking in either emotion nor story is both partially commendable yet constantly infuriating. Whilst there are moments of fleeting intelligence, his incorporation of the synthetics relatively modest and quiet in this select instances, he often reverts to droning and uninspired leitmotifs and rhythms to drive the music forward vast majority of the running time. It's perhaps more intelligible than other synthetic efforts derived from this year of scoring; Gone Girl and The Knick both sported scores which featured nearly entirely unlistenable 'music' all throughout their individual durations, making for dull and highly unsophisticated album presentations. Drone has more thematic ingenuity, compositional intelligence and prowess than either of those aforementioned efforts, though it still fails to provide an emotional arc or any semblance of musical development over its brief running time. It is a punishing listen, full of some absolutely infuriating music, mixed throughout small moments of coherence and intellectual work. It's not an entirely forgettable listen, but it's certainly nothing to treasure.

So whilst I would often feel morally obligated to award props to a smaller and less recognised composer, I find such meaningless commendation is undeserved in this situation. Cues like 'The Ground' and 'Wasps' are pieces which fail to adhere to a number of the primary principles of scoring, and lack any hint of emotional or coherent composition. 'The Ground' in particular is a piece which seems to fly all over the place, strings leaping about in seemingly random and unimaginative ways. Beneath the veil of chaotic strings, there lacks a purpose to the piece, and it's made worse by the fact that it doesn't contain any memorable nor enjoyable material. When the score does work to contain melodic comprehension, it fails in terms of intensity. Many volume adjustments are required throughout your listen of Drone, as Oyehaug constantly delivers overbearing and heinous synthetics which do little but deter us from continuing onward through the album. 'Statics' maintains a central melodic concept, and in terms of instrumentation and writing, executes it to an acceptable level, but the intensity of the synthetics used are so damn high that it may very well harm the ears of a more sensitive listener. Even turning down the volume isn't necessarily guaranteed to work; the pitch of the electronics is too excessively loud and oppressive to register as even partially enjoyable. This trend of utilizing overbearing synthetics has become an adamant component in the use of electronics recently, and provides few tasteful results throughout all of Drone.

There are moments of ephemeral beauty and emotional understanding, the music providing in brief installments glimpses into the documentary's themes and questions. The short but appreciated cue 'Americans' provides a cliched American fanfare, but delivered with little zest or enthusiasm, provoking the question that perhaps the Americans are not as clean and perfect as one might initially discern. Whereas Reznor and Ross often tried to inject power in regards to volume and pitch for Gone Girl, this rendering results which seem empty and devoid of emotion nor story, Oyehaug often embraces the use of empty synthetics, using this to focus on the emptiness of some of those interviewed for the documentary. 'Brandon' is a cue that displays an example of these aforementioned techniques being implemented in an appreciated and good way; the man this cue represents is a former drone pilot, who is coming to terms with the impact of his actions and the orders he has been given. The music reflects his internal conflict in a subdued way; a 4 note leitmotif of synthetic nature carries the cue forward, almost with reluctance. 'History of Weapons' has a strong and enjoyable central melody and beat, formed of a 3 note string riff alongside percussion. As the cue continues onward, the strings slowly develop into electronics, representing the present and future uses of weaponry within wartime, and how it has changed constantly over time. 'Rooftops' provides a slow and saddening string and synthetic effort, light instrumentation dabbling over the top of harder and darker fluctuations in volume. It's an effective and applaudable piece of music, that whilst perhaps not being overtly enjoyable, is worthy of praise due to its intentions and moderately successful execution.

Nevertheless, Drone lacks heart and emotion at its core, and whilst often representing the tribulations and deliberations of those involved with drone warfare with understanding and understated composition, doesn't execute it with a finesse that will be at all enjoyable for the average listener, bar a number of select individual cues. There are a number of singular thematic and melodic concepts which maintain my interest even now, but even they can't save this particularly difficult listen from running amok. Whilst not being the emotionless drivel and perpetually overbearing mess that a number of other electronic-based efforts have been this, Oyehaug fails to deliver anything that is even remotely exceptional. Nevertheless, I do desperately hope that this opens the doors for more to explore the work and style of Oyehaug, as I am now most certainly inclined to investigate more of this composer's work. I'd recommend you do to. You can purchase Drone on Amazon or iTunes, here and here.