Check it out... if you desire an emotive and highly evocative score, more interested in sentimental and emotional value than compositional prowess, of which it achieves with flying colours

Skip it... if you can not stand recycling of entire cues within a single album, despite the effectiveness of such a re-hash 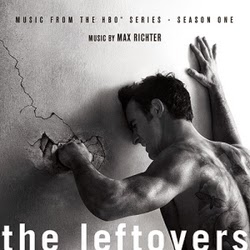 "The Leftovers is a stunning assortment of compositional ingenuity, Richter combining various contrasting genres and instrumental techniques together in an oddly dynamic yet slow effort, which focuses on basic but effective emotions and themes."

Produced and distributed by HBO, The Leftovers is a television series that lends its origins to a book penned by author Tom Perrotta and released in 2011. The series takes place three years after a global cataclysmic event where 140 million people disappeared from the face of the Earth. Understandably so, grieving is still a constant all over the world, as people not only despair over the loss of their loved ones, but yearn for their return, if such is possible. A Mapleton police officer, Kevin Garvey, is tasked with the job of keeping peace between the townspeople of his local district and a cult, the Guilty Remnant; a group made up of individuals that are both heartbroken yet cynical after the event. The series was released to moderate acclaim earlier this year, and has been embraced to a lesser extent than a number other HBO programs currently running. Despite garnering only modest ratings, the series has still managed to find itself with a renewal for another season, and so fans of the series should rejoice. In comparison to other HBO shows like Game of Thrones, True Detective and True Blood, the series has limped along with little steam, accumulating a particularly lackluster quantity of hype throughout both its pre-release marketing campaign and initial episode openings. Nevertheless, its partially applaudable critical commendation has led to a second season, which may very well amass a greater collation of fans than the current assortment, as is generally the case with HBO dramas.

The man in charge of compositional duties in relation to The Leftovers is the German-born Max Richter, a composer known for utilizing minimalist piano-based arrangements with strong undercurrents comprised of light synthetics. Having composed few scores within the past year, his last effort being that to The Last Days On Mars which was released on September of last year, Max Richter has had a long while to focus his energy and aspirations towards The Leftovers. Concentrating on employing his classical roots more blatantly for this project, as requested by program creators Tom Perrotta and Damon Lindelof, Richter has produced arguably one of the most emotionally resonant and highly enjoyable television scores of the year, surpassing numerous other efforts that perhaps contain greater production values, but lesser quality writing. Richter dazzles with subtle simplicity, delivering his most personal and devastatingly potent material since the beginning of his scoring career. From the opening beat to the last, The Leftovers is a stunning assortment of compositional ingenuity, Richter combining various contrasting genres and instrumental techniques together in an oddly dynamic yet slow effort, which focuses on basic but effective emotions and themes; these include heartbreak at the loss of loved ones, confusion and anger due to the unknown, and an emptiness, impossibly sated by any physical being, activity or object. Delivered with a direct sense of coherence and clarity, The Leftovers is an album which initially seems depthless, lacking in proper sentiment. But as numerous other scores released recently have informed us, all it requires is a little understanding of what we're listening to to properly comprehend the underlying tenderness and coldness that plagues this admirably effective release.

Whilst the primary theme for the series, introduced within the appropriately titled 'The Leftovers (Main Title Theme)', is a fast-paced thematic identity for the score, it doesn't wholly reflect the tone and pace that the rest of the album will undertake. It leads us fervently into the rest of the score, but this initial offering is quickly contrasted in mood by the gorgeous 'The Departure', a cue which reminisces on the sadness and emotional agony endured by those left behind during the cataclysmic event. This cue puts into motion the Departure theme, which is constantly referenced from thereon forwards, and serves as one of the emotional focal points throughout the entirety of the score. The leitmotif is comprised of an 8 note piano riff playing underneath a breathtakingly raw and sensitive pair of piano notes, the theme recurring over the duration of each new iteration into 'The Departure' series of cues (4 pieces in all) and another few other works where the melody is put into action, often with minuscule but evocative variations. After this immensely tender piece, full of regret and sadness, Richter takes us to the other side of the equation; whereas the 'Departure' theme represents (supposedly, seeing as I haven't actually seen the show and am basing this solely off the IMDb summary and the music alone) the sadness of the ordinary townspeople and that of, quite probably, the lead protagonist of the series, the material presented within the cue 'Afterimage 1' is far more cynical and aggressive, addressing the other side of the spectrum, these being the individuals who are less reluctant to simply mourn, and demand answers. Their vexation far outweighs their sorrow, or perhaps even adds to it, and they clamour for a distinct answer to the issue at hand. The 'Afterimage 1' cue presents a mix of piano over an undercurrent of synthetics and low strings, and it swells with the unmistakable vigour of anger. The reverb on the piano allows for a sensation of emptiness, and the synthetics help to add atmosphere to the cue without overpowering the organic instrumentation, so it therefore feels more genuine and pained than blatantly aggressive, which is perhaps a stronger route for Richter to take the identity.

As the score powers on, we traverse numerous emotional fronts, some of them saddening, some of them more neutral, others more so enraged. 'De Profundis' provides us with a 4 note celesta motif, played alongside ambiance, mournful choir and low cello. The contrast between the relatively innocent and upbeat celesta and the dangerously low-pitched, melancholy choir, cello and ambiance provides a wide disparate that represents the aforementioned contrasting stances being undertaken by those affected by the event. 'Only Questions' presents us the exact same motif as 'De Profundis', bar a solo piano taking over the role of the celesta, and it turns in a stunning result. 'Dona Nobis Pacem 1' is partially reminiscent of Abel Korzeniowski's stunning work for Romeo and Juliet last year (which is most certainly an applaudable comparison), due to its slow and lugubrious base string quaver melody, alongside powerful piano and metallic percussion (perhaps a xylophone or even a celesta?). The piece is another of regret and devastation; the title of the cue, a Latin term for "grant us peace" perhaps references directly to the idea of grieving and the character's inability to move on after the event, or even a direct plea for peace. 'Family Circles' repeats the leitmotif presented within 'Dona Nobis Pacem 1', providing a briefer iteration of the theme performed on piano. 'She Remembers' is another cue full of emptiness, loneliness, pain and but only a hint of relief, the sorrow of the situation reflected in a passionate violin performance of the slow 4 note theme presented within. 'Illuminations/Clouds' is a work filled with a surprising quantity of happiness, the choir and piano working together to provide an ethereal and highly appreciated soundscape. The reverb on the piano gives a sense of scope and height to the cue, elevating the piece further.

The assortment of cues I haven't mentioned thus far are cues which provide little variation on the already established pieces, some of them serving as complete re-hashes of previously written material. The assortment of 'The Departure' and 'Afterimage' cues fit into this category, and whilst I should perhaps criticise the lack of differentiation between a number of these pieces, I feel such would degrade my thoughts of the album as a whole; an album which is highly evocative and perfectly arranged in an order that delivers gut-punch after gut-punch in regards to the sentimental value. So whilst one may very well consider it lazy to blatantly recycle an entire cue and insert it within the middle of the album, I can do little but applaud the individual responsible for doing such, for the track ordering for The Leftovers is particularly notable for this exact reasoning; the re-uses are just too well done to allow for any depth of criticism. Each and every one serves a purpose; often to balance out the mood of the album and the two stances undertaken by the characters within the show. Nevertheless, whether one decides to condemn this certain creative decision, very few should be able to say that the score as a whole is not entirely harrowing; this is an emotive, elegant and heartbreaking affair, full of some of the most passionate instrumentation and writing of the past year, certainly in the television format. Whilst possibly not the most varied of efforts, Richter's slow and powerful work for this program is most certainly worthy of a recommendation and high praise. I truly do hope Richter returns to scoring this visual format into the future, for he seems to have a keen knack for it. You can purchase The Leftovers on iTunes here.