Check it out... if you have enjoyed Alexandre Desplat's output this year, and seek and emotionally resonant, oft-times powerful installment into his impressive discography for the 2014 calender year

Skip it... if you are not one for restrained and minimalist compositions, for Unbroken is a slow moving score centred around suffering and hardship at heart 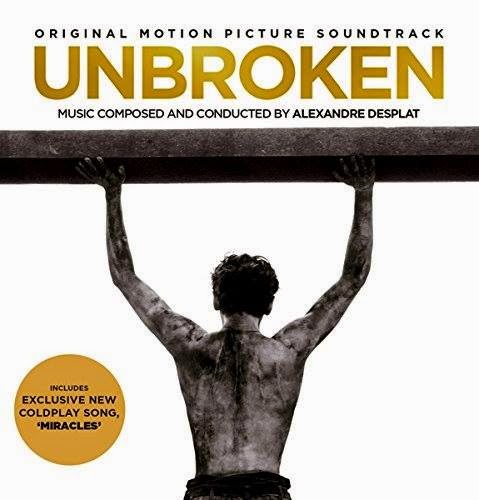 "Unbroken is a solemn, serious effort that contains few moments of legitimate despair or triumph; it is repleted with continually repetitive material which lacks neither the energy of Godzilla, the emotional potency of an effort of the likes of The Monuments Men, nor the elegance or inventiveness of The Imitation Game or The Grand Budapest Hotel."

Whilst the vast majority of the numerous Oscar-bait films released within the past year have been received with open arms, welcomed with strong critical and public commendation, Angelina Jolie's first major directorial effort has seen far less wide-reaching acclaim. Unbroken is an adaptation of a novel that was penned and released by Laura Hillenbrand in 2010, and was centred around the story of Louis Zamperini, a former Olympic runner who became a World War II legend due to his struggles endured within brutal Japanese prisoner-of-war camps. Written for screen by Joel and Ethan Coen, Richard LaGravenese and William Nicholson and starring Jack O'Connell in the primary role, the movie was released to generally mixed reactions. Whilst some critics and audience members appreciated the sentimentality of the picture, along with everyone universally agreeing on the power of the cinematography, sound design and performances, many were turned off by the routine structure, story and characterizations, and didn't appreciate the constant and undeterred violence and suffering of the film. Nevertheless, this is only the initial reactions, and considering very few have seen it, we can only expect the general consensus to change somewhat in the coming weeks. One of the generally well received components of the picture is that of Alexandre Desplat's score, which serves as his fifth contribution to this year's palette of exceptional compositions. Appreciated by the vast majority of film critics, scoring community members were eagerly anticipating the release of another Desplat concoction which could only add to his prowess within this going year of scoring; his odds for receiving numerous Composer of the Year awards are undeniable and undoubtedly in his favour.

Unfortunately for those who are fans of Desplat and his output throughout 2014, many will be disappointed by the lack of poignancy that Desplat provides throughout this work. Unbroken is a solemn, serious effort that contains few moments of legitimate despair or triumph; it is repleted with continually repetitive material which lacks neither the energy of Godzilla, the emotional potency of an effort of the likes of The Monuments Men, nor the elegance or inventiveness of The Imitation Game or The Grand Budapest Hotel (the latter a score which I initially disregarded as little more than a quirky mess, but now rather enjoy and appreciate). All that is not to say that Unbroken is entirely lacking in moving or detailed material; it's just in comparison to Desplat's prior works from the year, it lacks the excellence and ingenuity that we've all come to expect from this man who has proven so much to score-lovers all across the globe. Nevertheless, Unbroken sports a number of key and highly applaudable moments of passion and unrestrained elegance, these generally occurring towards the beginning of the running time, where the vast majority of the highlights of the album lay. The opening piece, 'We Are Here' instantaneously introduces us to the sombre tone of the album, but provides a heartbreaking rendition of the melancholy central thematic concept to provide more energy than blatant, gloomy atmosphere (which the score provides in earnest). The empty misery of 'Mac's Death', filled with slow and harrowing instrumentation, features one of the stronger thematic concepts within the entire score. The finale piece, 'Unbroken', displays heartfelt reprises of the primary leitmotifs, and deliver some of the most thoroughly satisfying and powerful music in the entirety of the album. In fact, at its finest, Unbroken is perhaps Desplat's strongest and most resonant emotional work since The Tree of Life or Harry Potter and the Deathly Hallows: Part 2, both from 2011. It comes off as bold, ambitious, yet intimate and sentimental all the same. It can be an elegant and harmonious exploration of human determination, drive and spirit.

On the flip-side of the equation, at its worst, Unbroken is a hollow mess, lacking the sufficient drive and emotional range to resonate wholly with the listener. The worst thing is that these portions of the score occupy over half the running time, proving consistently boring and derivative, and lessen the quality of the album majorly. Oft-times, the music simply sits in the background, providing little coherent composition nor anything resembling progression; much of Unbroken seems to be moody and atmospheric percussion and low cellos, played with but a few recurring and convoluted minor melodic concepts. Even in situations where the major thematic statements are being reprised to bold and appreciated effect, Desplat often overstays his welcome and repeats these simplistic concepts until the listener can do little but grow tired. 'The War Is Over' is a perfect example of where a certain thematic idea is exhausted to a point where it is no longer effective nor appreciated, and does not contain the intended emotional poignancy. In most cases though, the primary issue with the album is its lack of energy and vitality. There is many a time where the music seems to just sit in place, lacking major progression in character, motive or mindset. Desplat is capable of providing zestful and energetic compositions that also feature a sentimentality that is rarely so heartfelt and heavenly. The Tree of Life, another one of Desplat's slower and more emotional of affairs is a score which manages to capture the grace and simplicity of life with a musical passion; the repetitive nature of the score reflects the repetitive nature of human life, but intertwined within all the long and arduous sessions of reiterations, Desplat manages to infuse wonder and beauty, showcasing the splendour of our own existence and the beauty we seek, as well as the questions we desire to be answered. The Tree of Life is a score which never forgets the intimacy of human life and the connection we feel to those around us, but also remembers to embrace the greatness of the universe we inhabit, and delve into the suspicions we all partake in about not only our loved ones and other human beings, but about our own place in and amongst all of the rest of the cosmos. Unbroken seeks to ask and exhibit a reflection on the heartbreak and turmoil that is endured when one is asked to test their passion for life, and whilst it sports its fair share of grandeur and delicate artistry, it lacks the energy, progression in thematic material and wonder that The Tree of Life encompasses.

Speaking in terms of thematic material, Unbroken is a relatively limited effort, as are most of Desplat's endeavors. The central theme is a four note vocal piece, often accompanied with low cellos and piano, and is found within 'We Are Here', 'God Made The Stars', 'Mac's Death' and 'The Plane', and is one representation of the emotional taxation and devastation that occurs all throughout Unbroken. It's a strong primary leitmotific concept that helps to decipher and unearth the emptiness of the main character of the story, and its restraint and brief reprisals means that one never tires of hearing its appearance. A three note string theme is a constant all throughout the listen, and represents the hope and uplifting triumph of the tale; the concept is presented within 'Torrance Tornado', 'Olympic Kick', 'Mac's Death', 'Rain', 'The Plane' and 'Unbroken', generally to spectacular effect. There is little variation or change for this idea, and so therefore it somewhat lacks the impact that Desplat obviously hoped to achieve with it. Despite this, its final reprisal in the sensational 'Unbroken' is perhaps the shining moment of the album, flaunting the best example of emotional vigour this score has to offer. A three note brass theme explored within 'Torrance Tornado', 'Coming Home', 'Broken Ankle' and 'Unbroken' is highly reminiscent of this aforementioned brass theme, and often proves subsequent for that leitmotif's reprisals. 2 note brass pairs which again display a cold and emptiness that reflects the emotional turmoil faced by the protagonist is perhaps the final major thematic concept explored within Unbroken, its appearances including 'Coming Home', 'Mac's Death' and 'Dead Comrades', and it often proves to be one of the more obscure, unsatisfying ideas from Desplat; a disappointing feature.

Perhaps the most insufficient and lacking component of the score though is the use of the Japanese material, which makes up much of the filler on the album (believe me; Unbroken sports an abundance of such). Whilst the Asian-inspired influences are executed with accuracy and no lack of precision, they are generally the most understated and detached part of the composition. Whereas Desplat executed Japanese instrumentation and writing with power within Godzilla, all to great effect, his implementation of the ideas within this context is far less satisfying, and proves to be particularly prolonged and extensive, which doesn't entertain. Yet still, the score focuses on the thematic material and instrumentation behind the Western protagonist, and executes his leitmotific ideas with as many genericisms and basic orchestral flavours that one can gather. That doesn't mean that all the sentimental and emotional moments, however conventional, aren't powerful or affecting, because many of them are, that being perhaps the saving grace of Unbroken; it's just the album doesn't seem to sport anything overtly original. The central thematic material and general tone is reminiscent of not only Desplat's own prior work, but numerous other war and suffering stories, the most recent one that pops to mind being Hans Zimmer's minimalist and exceptionally unsatisfying "effort" for 12 Years a Slave, which was both absolutely unoriginal and lacking in anything remotely powerful. Unbroken is still far more potent than that lacking piece, Desplat managing to exert emotional substance numerous times throughout the score. Sure, many of them get lost in and amongst the dullness of the lesser moments, but they are still undeniably beautiful and affecting.

Unbroken is a disappointment, to be sure, but not for one second does it threaten Desplat's odds for receiving a much deserved Best Composer award; not only for the quantity of scores he has provided over the last year, but also for the amount of variation and compositional ingenuity he has managed to supply. It's strange to think that the composer behind the destructive Godzilla was also the man who undertook The Monuments Men or The Grand Budapest Hotel, two scores which harness sentimentality, comedy and quirk, all in close proximity to each other. Desplat's efforts here are not as refined as one would desire, but they do offer their fair share of human triumph and emotional grandeur, the composer's impressive skills still very much palpable, even at his less impressive moments. All the same, Unbroken is perhaps the least energetic and memorable of all of Desplat's efforts this year, but still an enjoyable and impressive collation of music. To see Desplat be shunned by the Academy this year in favour of any other composer would be a disservice to the man, and whether it is Unbroken, The Imitation Game or The Grand Budapest Hotel, a nomination for his efforts is not only desired, but expected. Unbroken is a passive, restrained, lacking work, which yet still contains enough beauty, heart and passion to obtain a positive rating. You can purchase Unbroken on Amazon or iTunes, here and here.