Check it out... if you're interested in the light and harmless lesser efforts of a composer like Thomas Newman, or wish to see a quieter, less inventive side of Danny Elfman

Skip it... if you wish to see something new from Elfman and Burton, and don't wish to endure a derivative, boring and lackluster album that contains nothing of real note 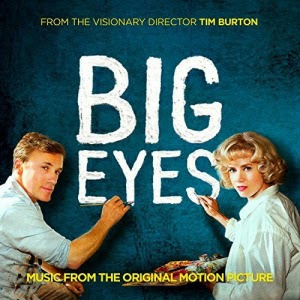 "The entire sound of the album seems to call back to numerous Beltrami and Howard efforts, except it has neither the same quantity of finesse or memorable material as either of those men could've provided."

With a career as lavish and varied as Tim Burton's, thanks primarily to his gothic tendencies which generally lend themselves to a wide assortment of tastes and ideas, it was a shock for many to hear what the man's next undertaking would be. Based upon a true story, Big Eyes is a film which follows the story of artist Margaret Keane, whose masterful artwork featuring saucer-eyed waifs, is passed off as her husband's in the late 1950's and early 1960's, due to the likelihood that it'll be better accepted coming from a male. Whilst she is absolutely infuriated to learn of this, her passive nature keeps her from exposing his deceits, and so she has little choice but to go along with the ploy. It is not until the divorce between Margaret and her husband Walter that she finally finds the courage in herself to uncover the truth behind the painting's origins, and takes him to court for the proper recognition she deserves. From the description alone, Big Eyes seems unlike any Tim Burton film come before; it seems almost grounded in genericisms. Is this a step in a positive direction from Burton, a man who is famed by all for his strange, wild and positively maddening visions and imagination? Considering the varied reactions from critics and audience members alike based on its initial release, many would dictate this as a direction best not followed from Burton, and the same could be said by many for Danny Elfman, the long-time collaborator of the director, whose compositional duties for Big Eyes have rendered rather... mixed results.

Elfman, a composer admired for his eclectic tastes, bombastic capacity but soothing sincerity, was the man tasked with providing a musical voice for the film, and what he delivered was far from conventional, in terms of his own individual standards. However, Elfman's work here is severely orthodox based on the industry norm, as much of Big Eyes sounds as if it was collated together thanks to rejected Thomas Newman material. It's slow, unmemorable, lacking distinction, and entirely unoriginal. That's not to say that what has been provided is necessarily disappointing on a fundamentally compositional level, as much of Big Eyes has decent intentions and arrives with a gait that is admirable. It's a fine old score in numerous ways; it just lacks anything that provides it a personality of its own. Especially when you compare it with other Elfman/Burton collaborations, such as the sensational Alice in Wonderland, Batman or the recent Frankenweenie, everything from Big Eyes seem so overtly tame and cliched that it is rendered underwhelming.

All that said, from the opening note, it's still clear that Elfman's ability in providing character and story through his music is intact. The opening cue, 'Opening', is full of light and easily developed piano and marimba, a strange choice for the subject matter at hand. It's quick, providing numerous key thematic concepts for the score, none of which stick out in the imagination as particularly memorable. Its material isn't necessarily entirely passive, as it seems to desire to come off as; it has a strange, darkened undercurrent that plagues much of the album. It's a forgettable opening cue, followed by more material which represents little promise. The concepts for the individual characters are generic and highly uninventive, the material for the main protagonist, is provided in an obvious showcase in the cue 'Margaret', and the antagonist, her husband, is showered with the conventional dark and dreadful cello, violin and percussion within 'Walter'. The slow build in to the latter cue also strangely feels like an excerpt from Shore's Middle-Earth material, furthering the notion that Big Eyes doesn't ever seem to really contain anything of originality. Still, there are moments where the music stands out as particularly impressive; the cues registered as composed by "the cast of Big Eyes", these being 'Bludan' and 'Tropicville' are both exceptionally entertaining pieces which call back to some classic Jerry Goldsmith work. It's immensely fun and entertaining, which is what more of this album requires.

Anything it tries to achieve has already seemingly been achieved by another score as of recently. Its attempts to sound minimalistic call back to the recent Max Richter work, The Leftovers, which delivered minimalist music with emotion and grandeur; things which Big Eyes fails to deliver. As aforementioned, it sounds dreadfully passive, even in its darker moments, and consistently reminds us of how immensely similar sounding it is to any average Thomas Newman effort. The entire sound of the album seems to call back to numerous Beltrami and Howard efforts, except it has neither the same quantity of finesse or memorable material as either of those men could've provided. It's like Hitchcock, only far less enjoyable (I actually recall appreciating that prior effort from Elfman).

All the same, it's not dreadfully poor music. It contains its fair share of fast-paced drama, and there are perhaps two key thematic concepts that stick out from the bunch as impressive and enjoyable. Neither of them will ever have me coming back for more, but it's better than nothing. So for those who were anticipating the next collaboration from the wicked minds behind some of the 21st centuries' most varied and eclectic scores, you may very well be disappointed. That said, if you enjoy the passive nature of a Thomas Newman album, or appreciate the light grace of a Jonny Greenwood score (especially if you enjoyed his work for the recent Paul Thomas Anderson project, Inherent Vice), then Big Eyes should be sought after. Otherwise, it's perhaps Elfman's least impressionable material since... well, anything, and from the first notes of the underwhelming 'Opening' to the last of the strangely non-triumphant 'Victory and 'End Credits', one should be expecting little. You can purchase Big Eyes on Amazon or iTunes, here and here.