Check it out... if you desire a creative and inventive synthetic, Japanese and percussive score from one of the modern masters of film, television and game composition, Bear McCreary

Skip it... if you can't stand synthetic fluctuations, repetitious percussion statements or electronic music in general, as Everly contains an abundance of such, and little conventional, orchestral writing 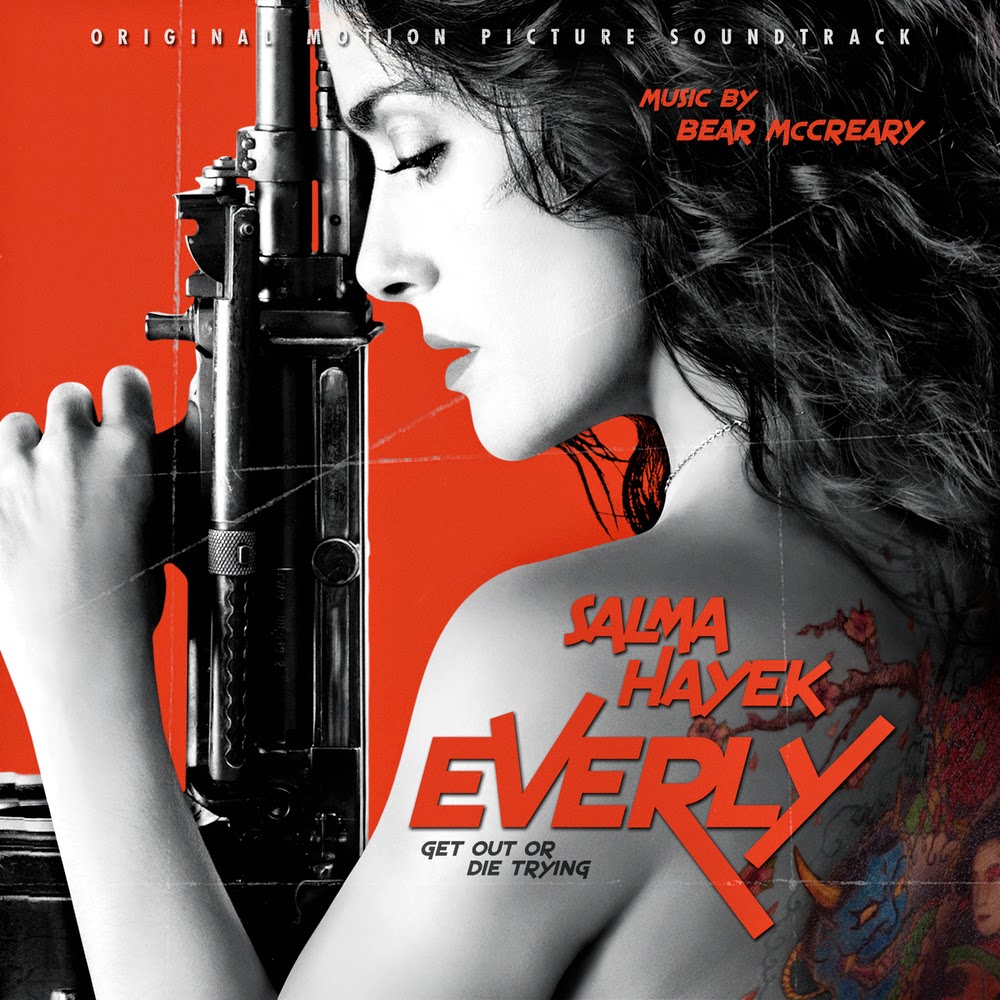 "I regret to inform anyone reading that I dislike a relatively major portion of Everly; a score which I found entertaining throughout much of its running time, but also lacking in the stylish nuance that one would expect from a score of this genre from a number of key periods within."

Directed by the man behind last year's somewhat entertaining Knights of Badassdom comes Everly, a film starring the talented and immensely beautiful Salma Hayek, which focuses on Hayak's protagonist Everly, who is thrown into a rather difficult predicament after her ex-boyfriend, a mob boss, sends a multitude of killers to collect a bounty on her head placed by himself. Insert lots of shooting, killing, dying; fun! This, alongside other 2014 late releases John Wick and The Guest, is another addition to this strange new cinematic convention of producing 80's throwback action films, which care little for detailed plot and more so for heated and explosive action sequences. Received with little popularity by either the mainstream audience nor the critical circle, Everly appears to be another flop for the director, Joe Lynch, a capable but lacking individual, whose films are consistently technically faulty. Knights of Badassdom saw such criticism from not only myself (though I did in fact gift it a positive rating) but much of the cinematic world, and Everly appears to almost be a recreation of such criticism, though to a greater extent. Returning to compositional duties beside the director is Bear McCreary, who in fact won an award for his efforts within Knights of Badassdom on this very website; the Best Comedy Score award. Not to mention he won perhaps the most heated category of the award ceremony, the Best Television Score award, for Da Vinci's Demons: Season 2, which was a masterwork of thematic implementations, instrumental variety and originality; it was a beast in terms of compositional ingenuity as well as length, stretching to nearly two hours in length.

McCreary's Everly is far shorter, this release clocking in at a "minuscule" fifty-six minutes, and containing 13 cues/songs; five vocal compositions being Christmas-themed tunes, sung by Raya Yarbrough and Bear's brother, Brendan, respectively. Some are fun and appreciated, others less so. What makes up the meat of the album, understandably, is Bear's work, which is divisive. As a tremendous fan of McCreary's, a composer who I respect for his versatility and wide quantity of flavours, I hate to criticise any of his work. In years gone by, I have not been forced to do anything of the likes either on this site nor anywhere else on the web (to my current knowledge). He is one of the most competent, intelligent, brilliant composers currently working (this is about the stage where one goes to comments and calls me out for sucking up to the composer in question), as illustrated by his tremendously impressive blog, found here. All that said, I can't but feel like Everly is not quite up to his usual standard. Actually, I regret to inform anyone reading, but more so myself, that I dislike a relatively major portion of Everly; a score which I found entertaining throughout much of its running time, but also lacking in a good quantity of stylish nuance that one would expect from a score of this genre from a number of key periods within.

There are few opportunities for greatness as vivid as a film like Everly; a film which is highly stylized and violent, but possesses numerous moments of intimacy and character-based emotion. It presents potential to an unprecedented quantity, like that of Joseph Trapanese's scores to The Raid films, or Steve Moore's quality work for The Guest. Whilst I was a stern believer in the quality of the latter's work from the second I heard the first chord, the former was a struggle to come to terms with. Trapanese's work felt hollow to my ears upon first listen. There was no heart; no vehemence; no energy. It took more listens to fully grasp the depth and power of the synthetic approach Trapanese embraced, especially for the second score in the franchise, but I nevertheless have come to appreciate its versatility and compositional quality. I fear that the same shall not occur with Everly, a score which I quite disliked for approximately half of its duration. The first few cues on the album, namely the initial offering which we shall be discussing, 'A Gift From Taiko', features little more than redundant and repetitious taiko drums and blaring synth pulses, none of the cue in question possessing an ounce of personality. The taiko drums obviously represent the antagonist of the picture, the ex-boyfriend entitled Taiko (named as an ode to Bear's percussive score to Battlestar Galactica), but they aren't really doing much to stand out. This portion of the score begs a comment on the similarity between Birdman and Everly; two scores which featured a great quantity of percussion, but neither of them fully working in terms of this section, the former more so. Birdman lacked direction due to its inherently scattered state, and never propelled forward in a logical and coherent orientation. Everly's percussive sequences, whilst consistent, aren't necessarily going anywhere, but more so lying in the abyss of nothingness that consumes them for a good portion of their use.

The following Bear input, 'Allies', is a more well-rounded cue than the former piece, and contains a greater emphasis on the vocal and string components than the previous composition. The first minute and a half is dedicated to developing a sensational vocal riff, one which I believe to be Everly's central thematic concept, over the top of a consistent synthetic and taiko drum pattern. It's glorious. The rest of the cue features pianos working alongside cellos to a powerful and understated effect, to deliver the theme of Everly's daughter, Maisie. 5 chords in length, it is a poignant and emotionally-resonant thematic concept that is used all throughout the album to tremendous effect. The next cue on the card, 'Fighting To Survive', I don't find nearly as tolerable. The first minute and a half feature a constant electronic and percussion rhythm that does little more than just sit there. The rest of the cue is varied enough, featuring some relatively impressive synthetic and percussive work; much of it in fact applaudable on a technical level. I myself do not particularly embrace the sounds and pitches achieved, but that is a personal gripe that doesn't necessarily reflect the merit of the score itself.

If one desires heavy synthetic-flavours that don't necessarily rest well on the ears but are most certainly inspired and creative, than one needn't look further than the sensational 'The Sadist' and 'Everly End Credits'. After the one minute mark within 'The Sadist', a dubstep enthusiast will undoubtedly lose themselves in heaven, McCreary instigating a short dubstep section that is followed by more heavy synthesizer and percussive sequences, all of which are surprisingly impressive. There are moments of redundancy within the composition, but they aren't overtly prominent. 'Everly End Credits' is a fantastic collation of numerous thematic concepts utilized throughout, and is perhaps the standout cue of the album; a nearly seven minute electronica extravaganza, filled with invigorating percussive patterns, synthesizers and sound effects such as the bleeping of medical equipment. Around halfway through, a Japanese Bansuri appears for a brief interval, accenting the Japanese influence the score sports all throughout; this is due to many of the characters in the film being Japanese (the main antagonist is called Taiko, for crying out loud!). The piece then delves back into the electronica genre for the duration of its running time, all to fantastic effect.

The villain's thematic cue, 'Taiko', not only provides a good deal of percussive material, but opens with one of the most obvious and immediately discernible uses of the relatively underwhelming Everly theme; her three note leitmotif lacks anything remotely memorable. We are then treated to a rather despicable and impressive Shamisen display, before the synthetics and percussion rushes out to greet us once again. The synthetics in this context possess personality and a distinct quality that I can't fully describe; they don't feel as neutral or lifeless perhaps as those utilized by other composers who have felt compelled to write with the same instrumentation in mind. McCreary is inventive, and even in his least flattering moments which may not register as pleasant to a listener's ears, it's hard to discredit his efforts to make his work variable.

Also to mention are the aforementioned Christmas-themed tunes, sung by Raya Yarbrough and Brendan McCreary. Yarbrough's vocals are absolutely gorgeous, and her two additions to the album, 'Deck the Halls' and 'Silent Night' are two stand outs, the latter being a dark and thoroughly beautiful rendition of the classic song. Brendan McCreary's work is less appeasing, but nevertheless entertaining, his work within 'Fa La La' in particular emerging as greatly applaudable. I would recommend that one possessing the digital copy would rearrange the album so that the score comes first, and the songs afterwards, as they do seem to stuff up the flow of McCreary's credited compositions. All that said, what I take away from Everly is a mixed batch. Despite my writing sounding overtly positive throughout much of my scribblings, I do find myself in deliberation over my own personal preferences. As a work of synthetics, it is an amiable and highly impressive collation of music, McCreary's efforts to provide variation within a genre famed for delivering little of such proving worthwhile. All that said, I can't say that I was a huge fan of the sounds emitting from my headphones; I appear to have sensitive hearing, at least in terms of electronica. Portions of Everly I find entirely unlistenable, and I have found others who agree. That's not to disgrace McCreary's hard efforts, but it is worth taking notice of. The percussive material is less satisfying as a whole, and is not always pushing in a direction which seems fully realised. The Japanese influences seem consistently overshadowed by synthetic fluctuations, at least initially within 'A Gift From Taiko', that detract from the quality of the album as a listening experience. All that said, the final half of Everly is an uneven, overbearing... and highly entertaining exploit, that features some seriously creative work from McCreary that manages to undo much of the damage felt by the initial half of the album's pitching. Everly comes as a score that is not necessarily for everyone, but for those who have embraced Trapanese's efforts for The Raid films and desire a synthetic score which features often creative and variable writing, something sorely missed within the electronic genre of film, game and television scoring within 2014, then perhaps Everly is worthy of a look, if only for curiosities sake. You can purchase Everly on Amazon or iTunes, here and here.