Check it out... if you seek a collation of percussion material performed by one of the world's premier drummers

Skip it... if you at all enjoy coherence, energy, meaning or purpose in your film scores, for Birdman contains absolutely none of these properties from beginning to end 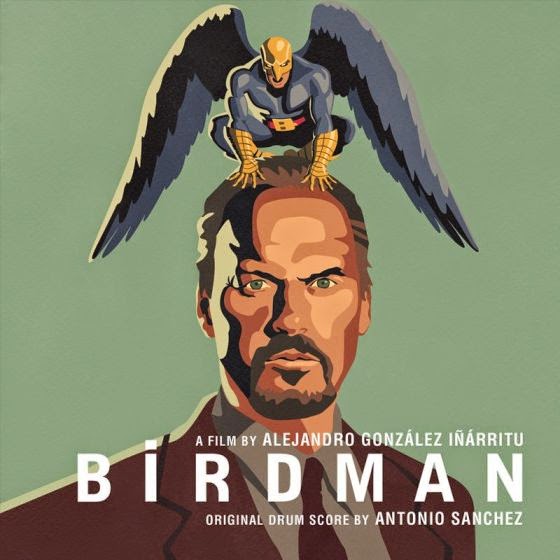 NOTE: This review only concerns itself with Antonio Sanchez's score; not the classical pieces included on the soundtrack album available for purchase.

"For percussion enthusiasts and those who wish to learn from a master of improvisation such as Sanchez, Birdman will render a thoroughly enjoyable listen. For anyone else desiring meaning and relevance, this album will invoke nothing but confusion and anger."

There are films with ego; there are directors who are inexcusably pretentious in their concoctions; then there is Alejandro Gonzalez Inarritu's Birdman, a film which almost covets its meta comedy and tone, and demands to be respected. It screams in your ear until you bow down and respect its supposed intellectual capacity, and by doing so, seems utterly forced in its intentions. Director Inarritu's pretentiousness is so profound and intrepid that it renders a viewing experience that is half built around technical ingenuity, with the other half involving a whole lot of narrative babble and nonsense. All that said, Birdman is still a reasonably entertaining film, with a number of absolutely incredible performances, brilliant cinematography (from one of the best in the business, Emmanuel Lubezki, responsible for the cinematography for last year's Gravity and Terrence Malick's cinematic opus The Tree of Life), flawless editing, explosive pace and immaculate production design. It also features redundant repetition (there are only so many times I can take two characters screaming at each seriously, and it happens within this film quite a bit), sequences featuring obscure imagery which doesn't feel necessary in this context, and a few select performances which feel overdone. It's a fun, entertaining escapade, which explores the depth of one's desire to remain relevant in a world where a social media presence is the norm, but often reverts to blatant reiteration just so it can hammer it into your thick skull; the film would have me believe that humans can not perceive subtle metaphorical lessons without constant reprisal of the same idea. The film itself centres around Michael Keaton's character, Riggan Thomson, a former movie star, who sets out to stage an ambitious Broadway theatre production to prove to those who doubt his capabilities that he is a "real" artist, and not a one-hit wonder. As opening night approaches, he has to prove to himself, those around him and his family that he is capable of leading them into success without simultaneously suffering an emotional breakdown.

As you've undoubtedly already heard, Birdman is shot in a way so that it looks as if it is a single shot the entire way through; there are a number of times where you'll be able to decipher where the editors have expertly stitched together the individual takes to form a single, coherent product, but for the most part, it's subtle and impressive. This visceral style provides a fluent and driving energy for the picture, and maintains the furious pace that Inarritu seeks to invoke all throughout. One would hope that this direct and powerful energy would carry on into the musical counterpart for the production; alas, one would be incorrect. Antonio Sanchez was the composer for the original score, and what he has provided will undoubtedly earn appraisal from some and criticism from others. I lean far further towards the latter side of the argument. Both inside and outside of context, his work is thoroughly unenjoyable, distracting, aimless, and above all else, lacking in drive. That last section of the statement is perhaps the most surprising, considering that contradicts everything that makes the motion picture it represents so immensely captivating (for the majority of its running time). Sanchez's work is perhaps the most disappointing of the year, considering the nature of the film he was working on, and how its musical counterpart was so incredibly vital to the success of the visual entity.

Still, I don't believe the issues found within Birdman are inherently Sanchez's fault; Inarritu and the entirety of the sound department are certainly to blame for this catastrophe, as well as the performer and composer at the centre of ti all. Inarritu's desire to be perceived as "meta" and "unconventional" pushes him to exploiting compositional techniques in relation to his music that are both lacking in depth, gravity, and basic narrative. Whilst I am an individual who commonly listens to scores prior to viewing the visual medium they support, the general public aren't often exposed to this practice, and are most likely to take in a score after seeing the visceral complement. Generally, this gives a viewer a better understanding of what the composer is trying to say with his music; one can entirely discern what exactly is meant to be playing over a specific piece of music in this situation. For many, it equates to a more meaningful and personal experience, and it often sways viewers to seeing a composition as perhaps better than it actually is; for a popular example, Gone Girl's far-reaching popularity is undoubtedly due to the atmosphere and gloom of the film, and taken out of context, it is not nearly as affecting. Birdman is another perfect embodiment of this rule. Already receiving nominations from various groups for its effectiveness within context (I find this bogus, as it often feels out of place in terms of tone and sound, even when placed in its intended setting), Sanchez's work further proves that groups of individuals famed for their award ceremonies seem to lack a basic knowledge of what constitutes good music in general, as well as decent film music. I believe the best film, television and video game compositions stand out on their own; Birdman absolutely requires the cinematic medium to be at all revered, as its lack of direction and distinct absence in regards to energy makes for one of the most insanely boring listening experiences of 2014.

As the album opens up, it is distinctly clear that a direction is not necessarily in sight. 'Get Ready' feels like an odd mish-mash of numerous tones and ideas that don't really mesh well together. There isn't a central thematic concept, nor is there really any consistent tone or mood. It's just kind of there. I feel like I require purpose in scores, but Birdman instantaneously informs us of its lack of such. This is undoubtedly formed due to the fact that the entirety of the album was recorded whilst Sanchez and Inarritu were watching the film together. Sanchez would react to the picture and the events happening within, and would use his initial reactions to improvise drum beats, patterns and rhythms that would eventually be used within the final product. Whilst this technique is somewhat applaudable in terms of its conceptual prowess alone, the reality of the situation is that Sanchez's work lacks clear direction and finesse; it is inherently messy at its core. This makes the solo listen difficult to process, absorb and fully embrace (or embrace to any extent whatsoever), as it appears to be all over the place. There is never any consistency to what he's giving, and so I can't grip onto anything in the conventional sense.

Apologists for the score will claim that it is a masterwork due to its chaotic nature; that it represents the turmoil and wild, unfiltered detriment that forms Riggan's entire character being and arc. I don't believe even that is true, for at least Riggan had rules, motives and drives that were consistent. He had a central goal that stayed as such all throughout, and that was to pull off a damn awesome show. He is most certainly mentally unstable to a certain degree, but this doesn't necessarily mean his actions are all lacking in clear, definitive meaning. He has a purpose, and that is not accentuated by the music that was produced. I feel I've also missed a major point in relation to the instrumentation of the score; it's all percussion. It's all Sanchez beating drums, cymbals, hi-hats and other stuff for half an hour. For percussion enthusiasts and those who wish to learn from a master of improvisation such as Sanchez, Birdman will render a thoroughly enjoyable listen. For anyone else desiring meaning and relevance (ironically, considering the film's thematic material), this album will invoke nothing but confusion and anger. It's dull, derivative, and utterly forgettable.

Were there a few cues I enjoyed? 'Just Chatting', 'Doors and Distance' and 'The Anxious Battle for Sanity' are perhaps the only three cues I'd recommend for any conventional fan of film music, and the initial piece is only 34 seconds long! The rest of the score feels like moaning and droning, or pieces which want to build towards something. 'Strut, Pt. 1' is an exemplary example of such; a cue which feels as if it wants to aim towards something more, but never really understands how to get there, so it simply sits in the lonely abyss of insignificance. In a lot of ways, this is a technical achievement, as is much of the visual medium it supports, but for the kind of genre it is trying to fit into, it fails on all accounts. Sure, music is subjective, but can anyone truly decipher the meaning of much of the running time of the album? Can anyone fully defend the decision to switch the balance of the music at random intervals, so that the sound is more resonant on the left speaker than the right, or vice versa? What is the purpose of these actions? Much like the motion picture it supports, Sanchez's effort feels like a pretentious, self-inspired exploit which lacks any ounce of substance that it desires to contain. During minuscule stretches, Birdman is almost worthy of commendation; but these moments are only minuscule, and Birdman is most certainly not worthy of anything part critical mutilation. You can purchase Birdman on Amazon or iTunes, here and here.