GAME OF THRONES: SEASON 5, EPISODE 2 "The House of Black and White" Review 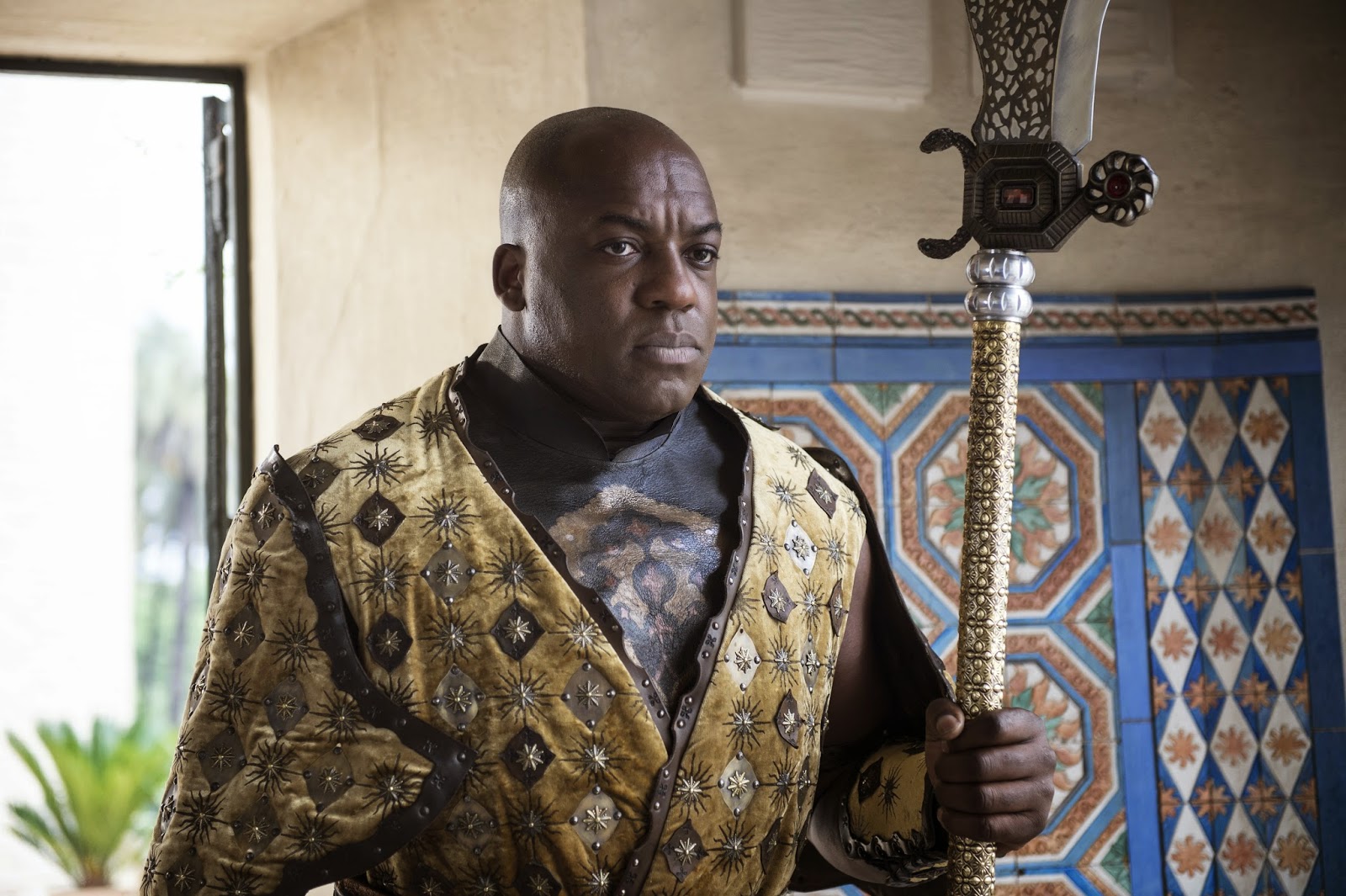 Officially establishing its weekly presence, the second episode in any television series premiere season or annual tread can oft-times prove the most difficult, both narratively and visually. Concocting an adequate blend of intrigue, build and pay-off in a single hour long dose is incredibly tiresome when one is at such an early stage of the season; the temptation of playing one's cards too early is great, as it can sometimes feel as if there is no other way to attract the audience's attention. That said, showrunners David Benioff and Dan Weiss have always seemed to have a grip on the direction of their work, and their second episodes never seem to rush nor drag, exerting a calculated and precise quantity of energy, that at once accumulates anticipation for the coming weeks and yet satisfies on its own terms. "The House of Black and White" is no different, though perhaps less impressive than last year's absolutely insane "The Lion and the Rose", which proved to be one of season 4's shining standouts. The episode trots along steadily, provides quality sequences with virtually ever protagonist available, and even gifts us opportunity to venture into new locations. It's exhilarating yet brooding all the same: we can almost sense the bricks being laid as foundation for what occurs next in the story. And considering the amount of non-canon material being added into the tale, even for book readers, this episode proves to be one of the most monumental, shocking and heart-pumping yet. Also: Areo Hotah. Get fucking hype. Look at dat axe! Beautiful stuff!

On a more serious note: finally. Arya has arrived. As a book reader (a fact I seemingly love to rub in all of your faces by the looks of things), Feast For Crows is one of the most insanely boring experiences I ever had the displeasure of bearing witness to. The only positives in regards to that novel were Sansa, Jaime and Arya's storylines; without them, I very well may have thrown myself from a tower, Denethor-style. And so Arya's storyline finally explodes with pigeon callbacks to season 1, silly looking doors, some sketchy visual effects and holy Lord Jesus it's a fire... or Mr. Trickery himself Jaqen H'ghar. Yes. Just... yes. Benioff and Weiss craft enough suspense within these sequences at Braavos to establish a genuine interest in the location (despite the two scenes featuring Arya taking place as either the first or the second-last in the episode) and its doings, and so the reveal of everyone's favourite Faceless Man is one that is both awesome and logical. I can not wait to further explore the various canals and districts that Braavos offers us, and with the fantastic production design witnessed here, I expect nothing less than rich details all throughout. A glorious Arya reintroduction for this season.

Cersei is jerking her power all throughout Kings Landing, and the ejaculate of her actions has hit numerous individuals square on the forehead. Qyburn has now been elevated to a place of great power (Dornish master plan in full swing people), Pycelle continues to make a fool of himself at every appearance and her uncle Kevan is tired of her shit. One does not mess with a displeased Kevan, especially when he is the Lord of Casterly Rock and capable of commanding numerous armies and individuals. Lena Headey's performance here perfectly establishes her character's depraved sense of mind at the present, and her disillusions of power; it's oh so funny how much she thinks she's in control of the situation. Meanwhilst, Jaime is heading to the great Southern land, Dorne, to find himself a wild daughter and bring her back to the confines of the capital. Waldau, looking as fresh as a mint, needs a friend to help hook himself one princess from the grips of the snake, and so who better than Mr. Badass himself, Bronn. Jaime, with companions in hand, is set to travel to meet Prince Doran and sneak his prized lion out of the nest; get hype!

Speaking of the Dornish; we got to go to Dorne! How awesome is that! Alas, 'tis only the Water Gardens, which is a partial disappointment, especially given how different the southern-most lands are to the rest of Westeros. A bit of desert could have done my eyes a great service, especially considering the other climates in play at the present (Dany's sequences had no desert). All the same, we are introduced to Prince Doran, as well as the new Myrcella actress. We are reintroduced to Ellaria Sand, who is looking mighty mint in her finest autumn attire. And then Areo Hotah shows up; more like, Game of Thrones showed up for Areo Hotah. He's so dreamy! I love the costume. I love the actor. But most of all, I adore the axe! I can not wait to see more of this individual; whilst we only got a minor glimpse of his full potential, much as was present with Oberyn's first scenes last season, we can almost feel the personality emanating off his being. I want to dig into more of his story! Moving off the topic of Hotah, the Water Gardens looked splendid, the show putting its extremely extensive budget to good use by hiring out an actual palace to serve as the location. You know you have too much money lying around when you see it apt to go and hire a goddamn palace out for shooting exteriors. Constructing sets are for pussies after all!

Brienne was actually interesting in this episode! What a surprise! Chase scenes! Valyrian steel beating the living daylights out of your average steel sword! Podrick furthering his status as the Neville Longbottom of Westeros! Everyone in an inn handling the concept that Sansa Stark is just sitting around perfectly fine! Also, the inn is the same one that The Hound trashed. I think. Probably. Gwendoline Christie did a fantastic job this week, evoking the desperation of her character splendidly, and the fight coordinators managed to put together a highly gripping chase sequence, filled with wonderful horseback action shots that threw us directly into the action. The lack of motivation witnessed within last week's episode for Brienne and Pod is in the distant past already, and I could not be more happy. Now, the question is: where do Brienne and Pod go now? And will they meet up with Septon Meribald? In the novels, Meribald is a Septon who travels with Brienne and Pod throughout the Riverlands, and provides what I still consider to be the greatest monologue in the history of fiction. Go a number of comments down at this link to read what I'm talking about. As to whether or not Meribald will appear, I believe the odds are greatly in our disadvantage. All the same, there is no telling for where the two are headed off to in the near future, and that is a somewhat surreal experience for myself.

I never thought I'd say this. I may never say it ever again. During this episode, Meereen featured the most interesting developments. What's even more astonishing; something that is surely never to be repeated in the history of the world. Not until the sun rises in the West and sets in the East. Emilia Clarke, the most consistently terrible actress on Game of Thrones, gave a stellar performance. Meereen featured some entertaining segments, but she absolutely stole the show as she ordered a former slave to be executed. Finally. Daenerys is finally losing the angelic exterior that Benioff and Weiss seem to have gifted her all this time, show watchers having been easily swayed into believing that her ability in regards to ruling is exemplary. But no longer! This decision that she made in this episode condenses 90% of her plot in A Dance With Dragons (thank the Seven), and so therefore, we get political intrigue, plotting, vengeance and a smidge of action in this venture to the eastern city that doesn't feel dragged out. I like that Weiss and Benioff have taken this route; instead of trying to lengthen out the plots showcased within the fifth book extensively and risking pacing concerns, they have decided to simply move past many of the major Meereen plot points (around three big ones still require exploration in the coming episodes) and move past the books. A bold move, and probably a good one. Also, Daario's costume is awesome. Meereen out.

Surprisingly, the most disappointing component of the episode was that of the Wall's. Whilst the various elements were all set to be effective in theory, the final result was a rushed one; namely Jon's ascension to Lord Commander, which contained very little tension due to the speedy duration of the precedings. It was as-if the scene was an afterthought, added in at the end of this episode due to time constraints in the subsequent episodes. This is a major issue, considering how much this event affects the Wall's storyline, and its lack of emotional gravity is troublesome. All that said, sequences with Sam, Gilly and Shireen, as well as the fantastic scene between Jon, Stannis (the Mannis) and Davos, all proved captivating, harrowing and stark (dat pun). Selyse also continues to prove how batshit insane she is, and that's always fun. In summary: the Wall was half-good, half-terrible.

Have I missed anything? I don't think so. Oh wait: Tyrion and Varys had a discussion. It was entertaining but nothing all that special. Anything else? Oh yeah: Drogon is back. There's a reason I didn't use an exclamation point there. Because it's not a good thing. He was meant to return in a far more epic way further on in the season, and so I am not approving of this early reuniting. That said, it should be fairly easy to edit the scene where he appears out and then re-watch it and forget he ever showed up. All the same, this episode was a fantastic one. Small moments of comedic glory. Serious dramatic tension in Meereen, Kings Landing and Dorne. Arya returns to the fray, and her slippery friend H'ghar has returned. Jaime was looking like rock god. What's not to love (part the Wall and Drogon)? The episode was both exceptional in terms of immediate satisfaction and how much was set up for the next few episodes, and so therefore Weiss and Benioff deserve a great deal of acclaim. Until next week, I leave you with Stannis, a promo and my goodbyes. 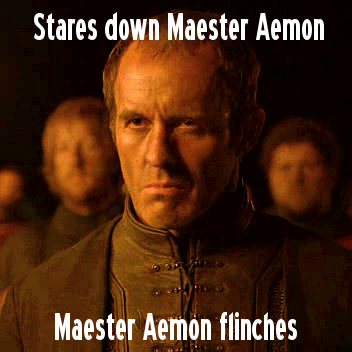