Check it out... if you're an avid supporter of synthetic/orchestral instrumental hybrids, Trapanese's efforts here featuring 15 minutes or so of genuinely impressive, engaging material that support the notion that electronic composition has the potential for evocation

Skip it... if you were unconvinced by Oblivion or Tron: Uprising, and wish not to endure an album fit with many of the same compositional techniques as this aforementioned titles, except this one lacking much of the finesse in the recording and mixing stages 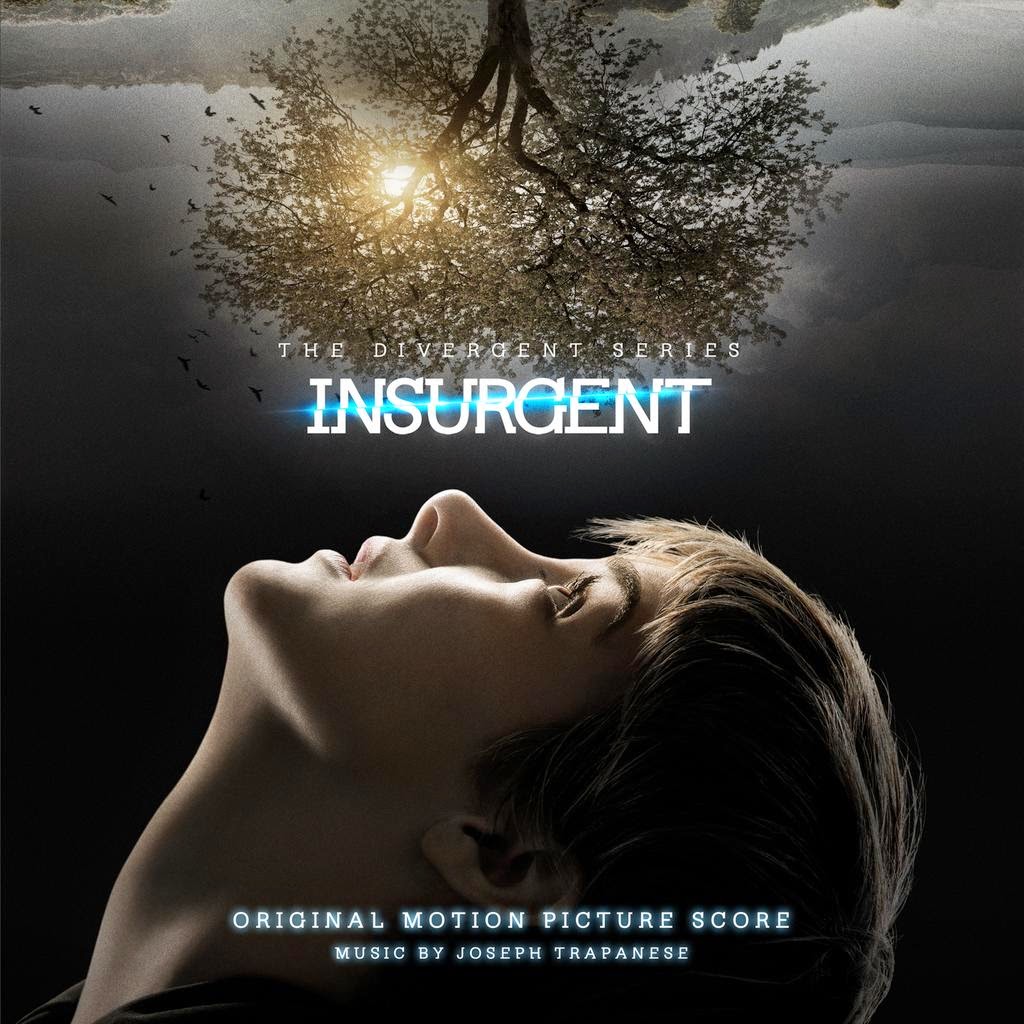 "[Insurgent] features small moments of genuine triumph, intelligence and emotion, but is for the most part a terribly dull experience."

The sequel to one of 2014's hottest commodities, Insurgent is bloated, dull, derivative and overtly silly. In comparison to the far superior Hunger Games franchise: a series that presents a poignant, aggressive and intelligent (albeit partially repetitive) universe, full of living and breathing characters and relationships (even the most cliched of love triangles can prove emotionally resonant with the right performers), the Divergent film series is a rather hilarious spectacle misfire. Its inability to present anything that feels remotely distinct is its central downfall, but the features also fail on presenting characters who we care for, nor action sequences which have our hearts beating faster. There is neither intelligence, creativity or grandeur to the world that the films encompass, and it's hard to derive enjoyment from something so visually sterile in comparison to the competition. Fortunately for disparages of this dreaded concoction, the box office returns reflect much the same: the opening weekend numbers for the sequel to last year's Divergent were down by $2 million in comparison to its predecessor, and Insurgent has failed to produce the same amount of post-release hysteria within both the mainstream and devoted fans of the source material from which it was adapted. This time last year (15th of April), Divergent was still grossing upwards of $1 million, whilst on the last recorded date for Insurgent (13th of April), the numbers had fell to just $400,000. Audiences have grown tired of this uninspired blunder, and such is sure to reflect further more with next year's continuation, Allegiant (the original source material split into, in classic Hollywood money-leeching fashion, two parts).

In regards to this music for this series, you may have noticed that few have spoken of its merits or detractors. This is namely due to the fact that Divergent's score was rather forgettable: whilst Junkie XL had undeniably conjured up one of the strongest scores of his career, it still didn't provoke anything more than muddled appreciation from the mass community. The vocal approach, the synthetic influence, the percussive incorporations: it had all been done before, and far better. I will admit, it was an enjoyable release, and one that I do not regret listening to, but it is nonetheless nothing astounding. Due to what one can easily presume was time constrictions, namely in regards to his involvement with Batman Vs. Superman and Mad Max: Fury Road, Junkie could not return to provide music for the sequel. Instead, Joseph Trapanese was recruited for the task of scoring this much "darker" and "intense" installment into the franchise, and his efforts have been received with far less fervour than his predecessor's. That is to say that acclaim for the album has been sparse, the vast majority criticising the barren and dull palette of instrumentation and rhythmic devises employed within. And whilst some of the condemnation has been brutal, I'm always willing to provide a fairer perspective, unswayed by any hints of an unabashed distaste for the art of electronic composition (which many seem to inherently dislike). Joseph Trapanese's previous works have proven surprisingly entertaining for myself, both Oblivion and Tron: Uprising in particular ranking high within my end-of-year assessments in the years they were both eligible for. As someone in the middle of the equation who enjoys and judges fairly both synthetic and orchestral works, if there was anyone to reasonably assess, based on both technical aptitude and emotional connectivity, the true value of a Joseph Trapanese album, it is me.

With that extensive disclaimer out of the way, lets cut directly to the chase: Insurgent is immensely disappointing. It does not possess anywhere near as much rampant electronic mayhem as Oblivion nor Tron: Uprising; the kind of stuff that made those titles dreadfully enjoyable. Instead, it's far more comparable to the disappointingly abysmal The Raid 2, also composed by Trapanese and released last year to dismal reactions from critics, myself included. Oft-times repetitious, that score lacked nuance and a spectacle that the recording could have greatly benefited from. It was pounding and methodical, and never seemed spontaneous. The same can be said of Insurgent, which features small moments of genuine triumph, intelligence and emotion, but is for the most part a terribly dull experience. The pulsating electronics mesh with sampled percussion to impart upon the listener little more than regurgitated rhythms and patterns that feel reminiscent of any number of Remote Control Productions scores. Action cues are fit with virtually no eloquence, Trapanese's direction solidified towards total intrusion, any hint or chance of subtlety aborted from the onset (or just after such). Sound design segments offer brief refuges from the overbearing synthetic onslaught, but little can be done about Trapanese's inherent methodology and approach towards the score as a whole: a lack of sophisticated, developed or genuinely appreciable music plagues great portions of the 110 minute long release.

Trapanese welcomes us back into futuristic dystopian Chicago with a pair of reasonably enjoyable, impressive cues which expose the composer's potential for effective ambiance-based writing. Both 'We Found It' and 'Amity' demonstrate an approach to a consistent sound that is simultaneously aesthetically pleasing and yet relatively refreshing, the light-weight artificial instrumentation blossoming and flourishing with ease. Both cues feature their fair share of tension and trepidation, but Trapanese handles the mood with a deceptive simplicity and maintains an undertone of intrigue all throughout. His utilization of reverb and bass undercurrents are as invigorating as they are surprisingly versatile. We're even gifted a range of prominent thematic identities throughout the length of 'Amity', culminating in the first statement of the romance theme for the two central characters at 2:34, a heavy bass drop resonating deeply with the listener. The obtrusive vigour of 'Dauntless Arrive' is a disappointing step-back for the album, but it's nothing substantially bad. At this point, I'm rather infatuated with the soundscape Trapanese has indulged us within, his sweeping mix intoxicating, however lacking much of the composition is.

'Escaping Amity's various detractors are yet still not enough to convince me that the rest of the listen will produce little more than distaste, the cue's havoc and various twists and turns engaging and entertaining enough to conjure a smile on my face. The string work is suitably brilliant, and the timpani is a strong, powerful inclusion to the recording. Things begin to turn towards a negative direction as 'Train Attack's immense volume spikes and distortion distract from an otherwise decent piece of music. This kind of concern is a disappointingly predictable offshoot of Trapanese's production capabilities: he often overproduces his works, reducing the natural flow of a piece into a disjointed and bellowing mess. 'Candor', 'Surrender The Traitor' and 'You're Real' are but a few examples of this inexplicably tiring negative that pervades much of the running time. Sostenuto electronic notes are repeated for upwards of half a minute, forceful in their implementation and role. The love theme's brief reprise in the first portion of 'Truth Serum' is overwrought with a layered, echoey sound that sounds as artificial as it does tacked on. This atmospheric technique that Trapanese is so fond of proves fruitful and even poignant when utilized in moderation, the compositions remaining the focus and the mixing all but helping to elevate the music from its inherent shallow depths. Yet as one plods through the running time, it becomes clear that the composer is using post-production fluff as an excuse for lacking considerable weight within his writing, and that can not be wholly disregarded at any stretch.

After traversing the first half of the album, you have 'You're Worth It', 'Erudite' and portions of 'The Message' to look forward to: the rest of the track-list serves as irritating, clunky and intellectually-lacking folly. It's nothing overtly repulsive, like what was witnessed within The Boy Next Door, Chappie or Das Edwige Leben, but it certainly isn't worthy of commendation. The primary leitmotif for the relationship serves as the only truly remarkable melodic passage in the duration, the lead protagonist's theme unfortunately underwhelming and indistinct. The aforementioned 'You're Worth It' serves as the best presentation of Trapanese's simplistic yet nonetheless affecting romance identity, and exhibits the composer's underlying potential for evoking sentimentality. This instance of beauty makes it all the more devastating when one is subjected to the rhythmic and droning tendencies of the rest of the album, the pounding percussion and synthetic strings poor in comparison. For those confused as to why I would find a great deal of enjoyment within Oblivion and yet dismiss Insurgent as an inferior endeavour, despite both scores possessing similar constructs and compositional nuances, my reasoning relies on my own inherent distaste for the sounds emitting out of my headphones. The volume of so many of the synthetic components seems to lack adequate equalization, and the reverb proves more gimmicky than engrossing after the initial stages of the album. Yet even in its most aggressive, headache inducing, pulsating moments, it remains indistinct. If it wasn't for the irritating volume spikes and action crescendos, I would almost be tempted to provide a neutral or even positive rating. But as a listening experience on album, this release serves as another disappointing electronic venture from Trapanese, despite various instances featuring positive production, recording and instrumentation. You can purchase Insurgent on Amazon or iTunes, here and here.

Additional notes about release: a digitial booklet is available through purchasing with, unsurprisingly, digitial vendors.